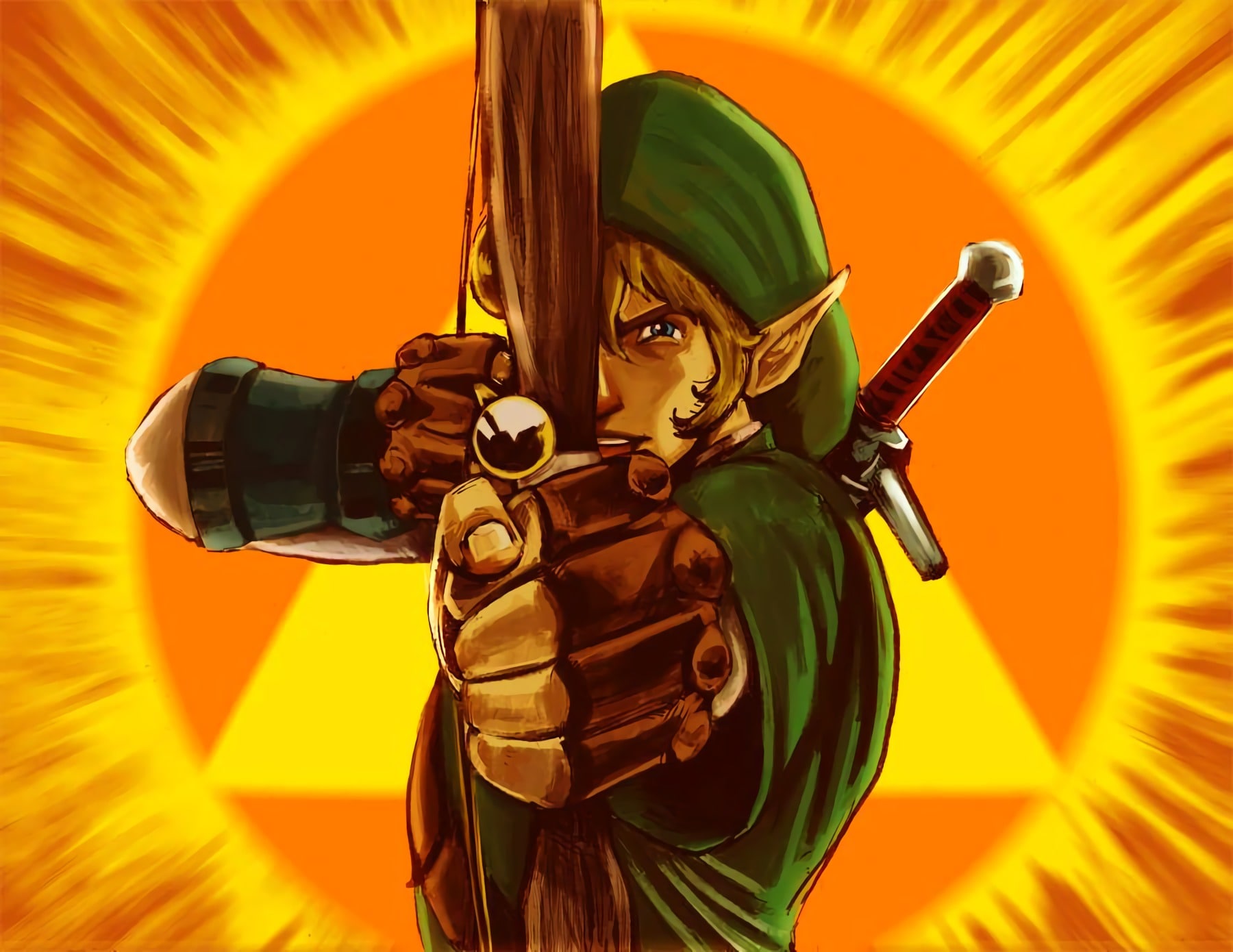 Closing in on its 40th year as a series, The Legend of Zelda is as esteemed, beloved and successful as ever; its latest iteration, Breath of the Wild has sold over 19 million copies to date for the Nintendo Switch, making it one of the best-selling video games of all time.

Pretty much everyone knows the story of Link, Princess Zelda, Ganon and the Triforce — but did you know what the Triforce was originally supposed to be made of? Or the inspiration behind Link and Zelda’s names?

The following are some The Legend of Zelda facts from the game’s groundbreaking inception back in 1986 for the NES all the way to the present day.

Ever notice that Link bears a striking resemblance to another puckish, pointy-eared, fictional character wearing green? One who also plays a woodwind instrument? And brandishes a sword? And has a fairy companion?

We’re talking about none other than Peter Pan, iconic literary figure and eponymous character of the 1953 animated Disney film. In an interview with French online publication Gamekult, legendary Nintendo game designer Shigeru Miyamoto confirmed that the design for Link’s sprite (done by Takashi Tezuka) was partially inspired by the boy who wouldn’t grow up.

“At the time, as you know, the NES was very limited, and we were only allowed three different colors. And yet we wanted a recognizable character. What I wanted above all is that he uses either his sword or his shield, and that it is visible,” Miyamoto said. 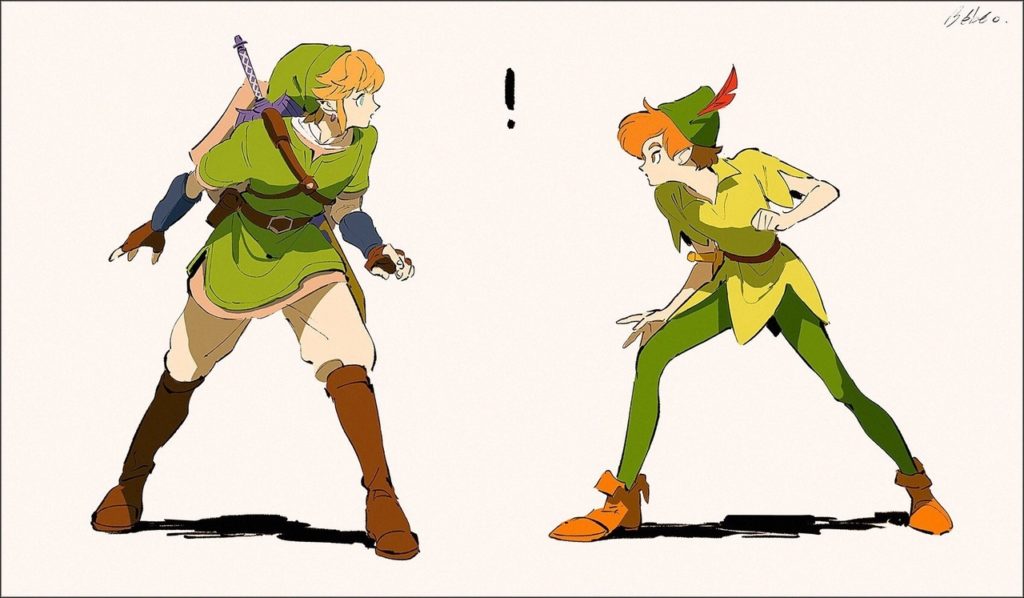 “We then thought of a long hat and big ears. It reminded us of a magical character, so we set off in the direction of an elf… at the time when you thought of a character with pointed ears you thought Peter Pan, and as I love Disney, we started to draw inspiration from it… From there, I told myself that Peter Pan’s green suited him perfectly.”

2. The Legend of Silicon Valley

The Gamekult interview revealed another interesting tidbit of Legend of Zelda history. Or maybe instead of “tidbit,” we should’ve said “microchip”? 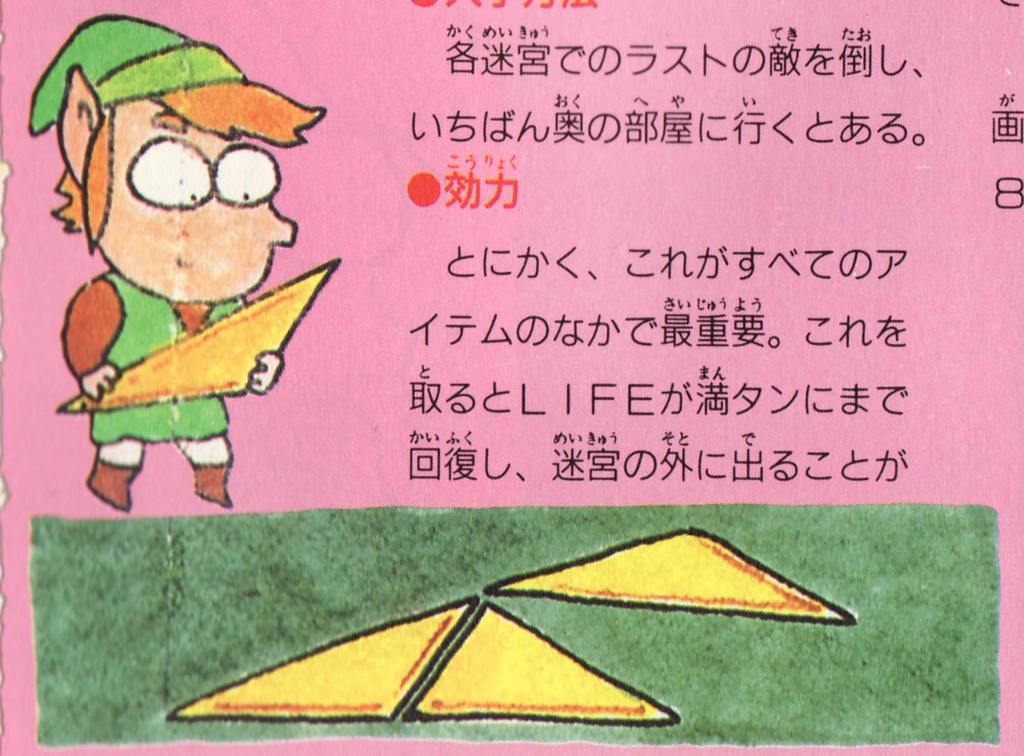 “Link’s name come[s] from the fact that originally, the fragments of the Triforce were supposed to be electronic chips,” Miyamoto explained.

“When we started designing The Legend of Zelda, we imagined that the fragments of the Triforce would actually be electronic chips! It had to be a video game that would happen in both the past and the future. As the hero made the link between one and the other, he was called ‘Link.’

3. The iconic Legend of Zelda theme was almost a different song

Nowadays The Legend of Zelda and its iconic Overworld theme are intrinsically linked. But is that only because the game narrowly avoided using a different masterpiece as its theme song?

Composer Koji Kondo (who also created the soundtrack for the original Super Mario Bros.) revealed that the original The Legend of Zelda title crawl theme was almost a different song entirely.

“For quite a while, it just played Ravel’s Bolero. It really matched the opening crawl,” said Kondo in an interview with the official Nintendo website. “But immediately before finishing The Legend of Zelda, we learned it was still under copyright.”

Maurice Ravel was a French composer, pianist and conductor. In the 1920s and ‘30s he was regarded as the greatest conductor in France. “Bolero,” originally composed as a ballet, premiered in 1928 and is considered his most famous piece.

Moblins are spear-wielding, bipedal, pig-bulldog looking monsters. They’re one of Link’s most well-known and recurrent enemies in The Legend of Zelda series.

Except for one Moblin, that is. The Secret Moblin. 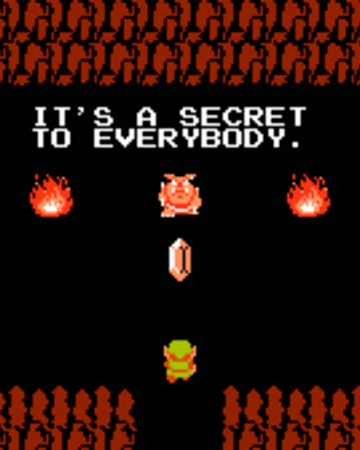 The Secret Moblin is a moblin tucked away in various caves in the original The Legend of Zelda. Instead of attacking Link like the rest of his brethren, The Secret Moblin awards Link with rupees while uttering, “IT’S A SECRET TO EVERYBODY!”

Keep this a secret..

The phrase has since reappeared in nearly every single Zelda game since, a running gag for Zelda fans on the same level as “I have a bad feeling about this” from Star Wars. Characters who have used the phrase or a variation thereof in The Legend of Zelda series include:

Sorry, Secret Moblin. We had to let the secret out.

“He was the leader of a band of thieves who invaded Hyrule in the hopes of establishing dominion over the Sacred Realm. He was known as a demon thief, an evil-magic wielder renowned for his ruthlessness…” 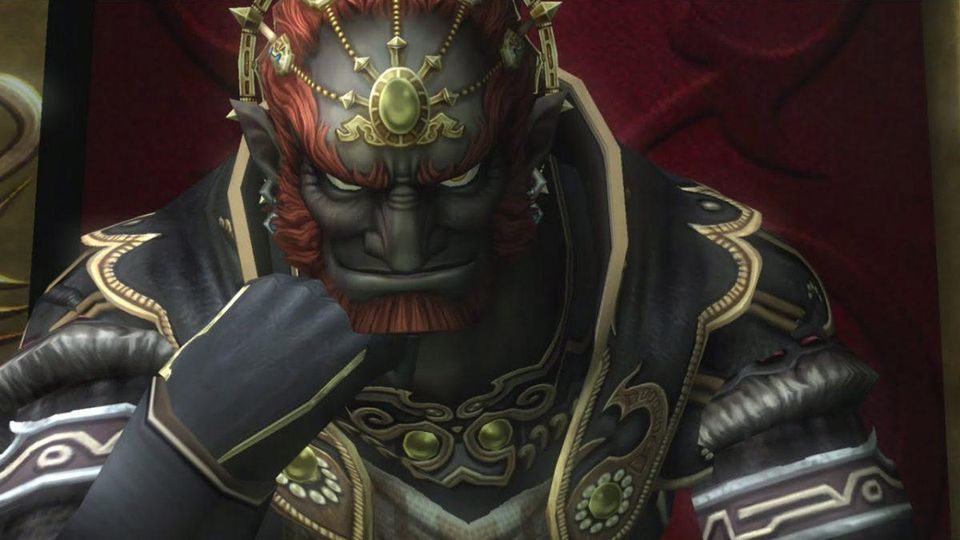 Ganon, Link’s arch-enemy, the embodiment of evil in The Legend of Zelda series and one of the most recognizable villains in all of gaming isn’t just a mononymous entity like Plato, Rembrandt or Prince.

According to the SNES instruction manual, Ganon’s surname is Dragmire.

6. It’s bigger than you thought

One reason why The Legend of Zelda remains a phenomenal game to this day is its grand sense of scale. The world felt gigantic (especially when it was first released) and presented players with both an immersive and daunting experience. 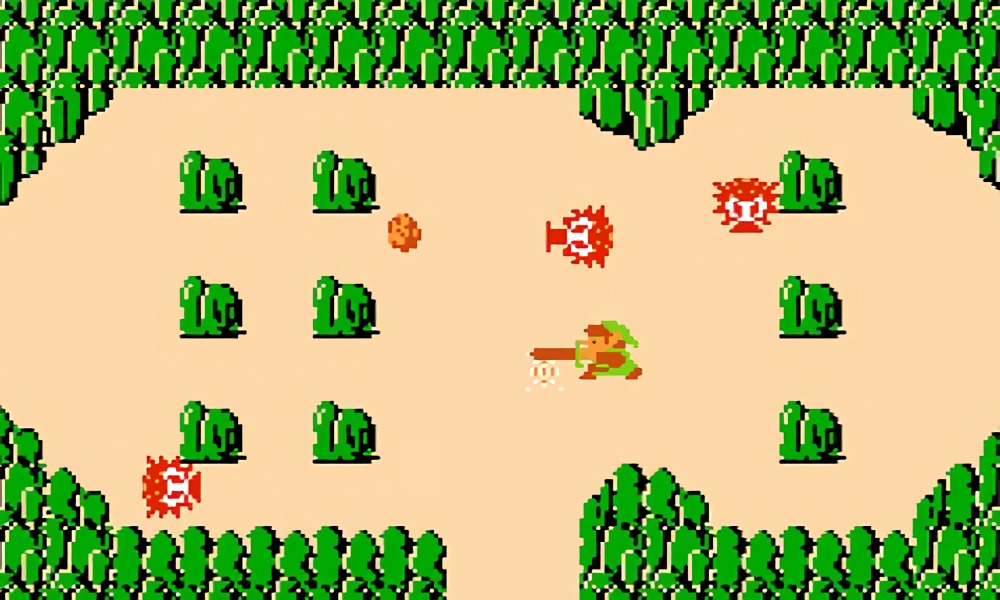 So imagine one’s surprise when they discovered that the original Hyrule overworld was but a fragment of the fantasy-land in its entirety in Zelda II: The Adventure of Link.

Here’s a look at the Hyrule overworld from the original, courtesy of NESmaps.com:

Which amounts to only the small, left-hand corner of the map in Zelda II: 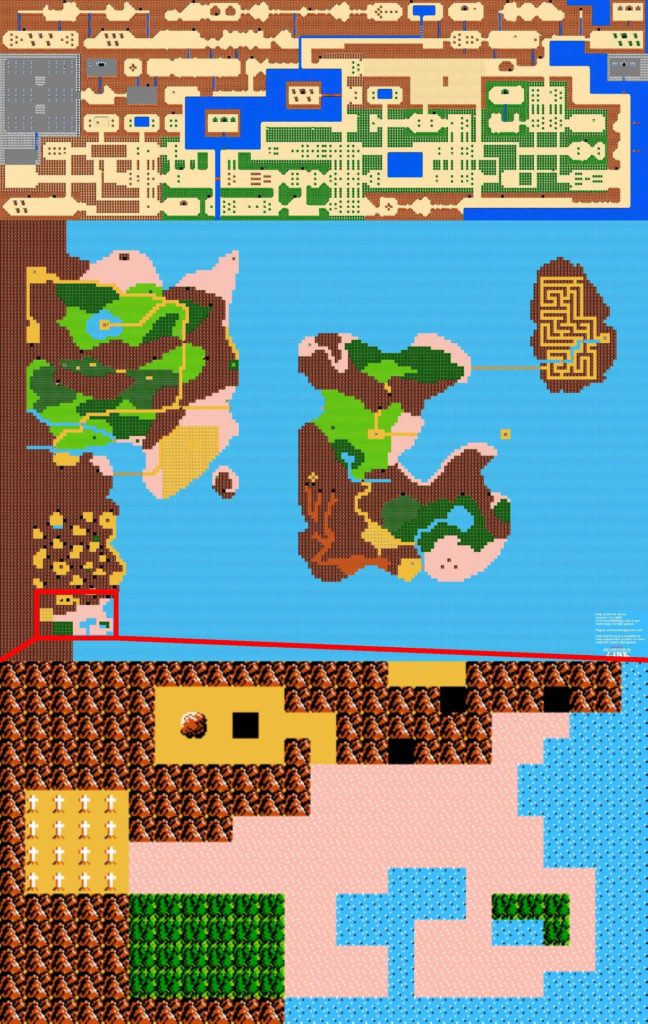 The Picori, also known as the Minish, are a group of anthropomorphic mice-creatures with long, pointed ears from The Legend of Zelda: The Minish Cap. 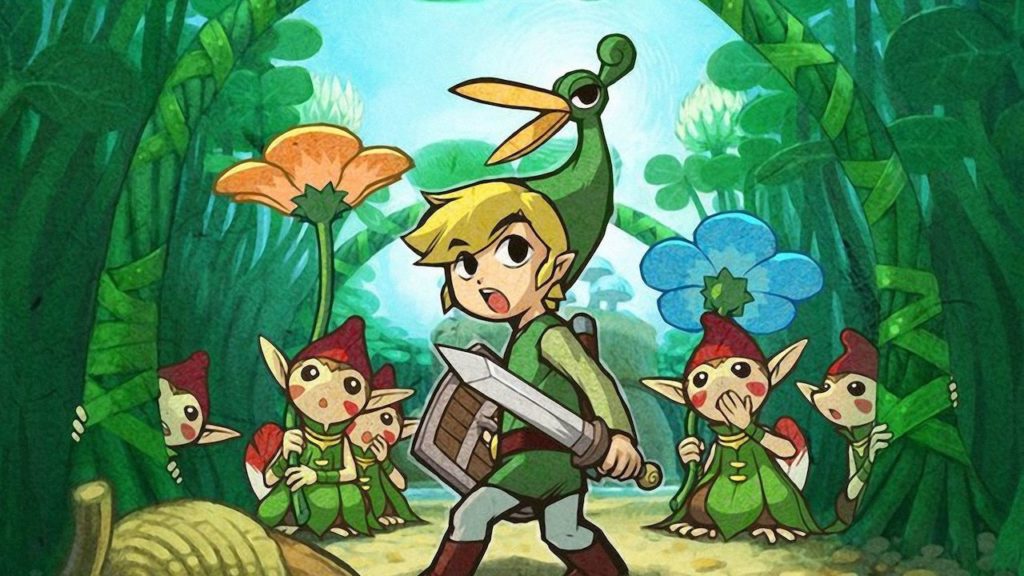 The Picori, no bigger than Link’s thumb, are consequently invisible to the untrained eye, so Link has to shrink down by way of a magical talking hat to interact with them. (According to King Dalton, the Picori are invisible to all but well-behaved children.)

The Picori were originally going to be included in The Legend of Zelda: Breath of the Wild in various miniscule towns across the map but the idea was scrapped further along in the game’s development.

Or maybe they’re really in the game but we just can’t see them because we’ve been naughty.

Of all The Legend of Zelda facts on the list, this one might be the most unexpected.

The Legend of Zelda: Link’s Awakening, whose remake was recently released on the Nintendo Switch, is a unique Zelda game in that it’s a vast departure from the usual “castles, princess and Hyrule” fare staples of the franchise. 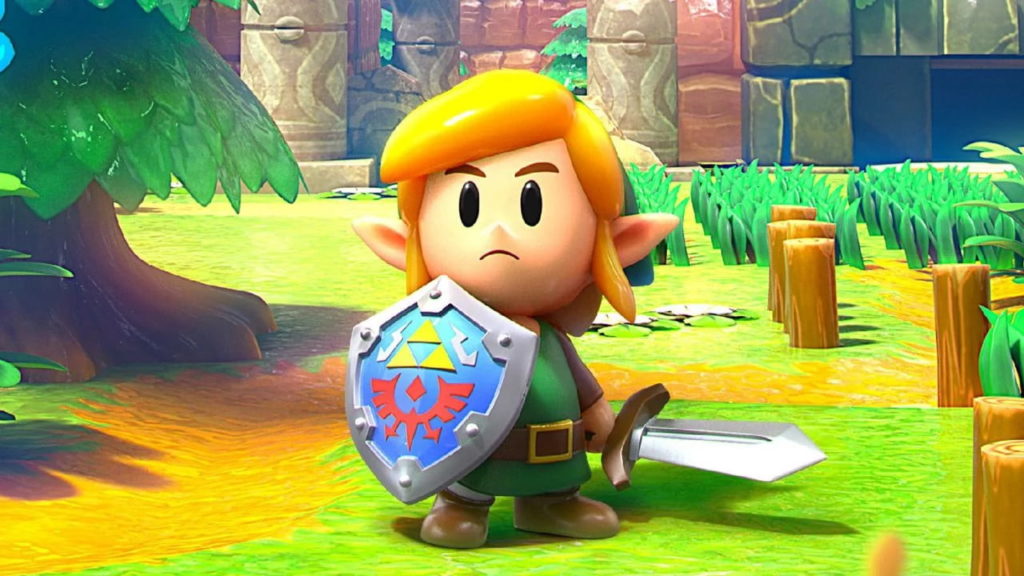 Link’s Awakening is also straight up weird. There are cameos from Mario characters like Bob-Ombs, Shy Guys and even Wart, the main villain from Super Mario Bros. 2. Link communicates with a shy, old man via telephone. Fast food restaurants are referenced. There are mermaids, talking animals and singing frogs and metatextual fourth wall breaks.

The game’s narrative also has a deceptively melancholic tone, with plenty of powerful, cryptic, and emotional moments that tread the line between reality and dreamlike surrealness. You could almost describe it as… Lynchian? (David Foster Wallace’s “Academic definition” of the term “Lynchian” summated it as “a particular kind of irony where the very macabre and the very mundane combine in such a way as to reveal the former’s perpetual containment within the latter.”)

Wait a minute, a Legend of Zelda video game based on the work of David Lynch, American filmmaker famous for avante-garde, surrealistic films such as Eraserhead, The Elephant Man, Blue Velvet and the television series Twin Peaks? 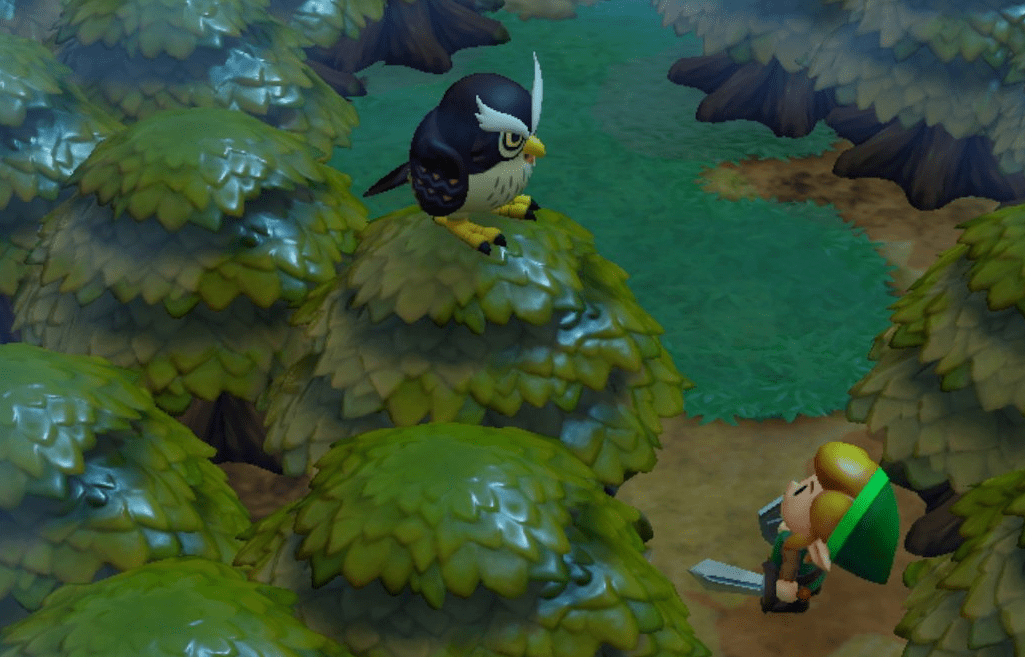 “At the time, Twin Peaks was rather popular,” Tezuka said in an Iwata Asks interview on the official Nintendo website. The drama was all about a small number of characters in a small town…so when it came to Link’s Awakening, I wanted to make something that, while it would be small enough in scope to easily understand, it would have deep and distinctive characteristics.”

9. The classic inspiration behind Zelda’s name

As we discussed in the first entry in this article, the character of Link drew inspiration from the unlikely sources of Peter Pan and computer chips. So surely Zelda, Princess of Hyrule and one of the most well-known characters in videogame history has similarly intriguing influences to her name? She does — and from a source even more surprising than Link’s. 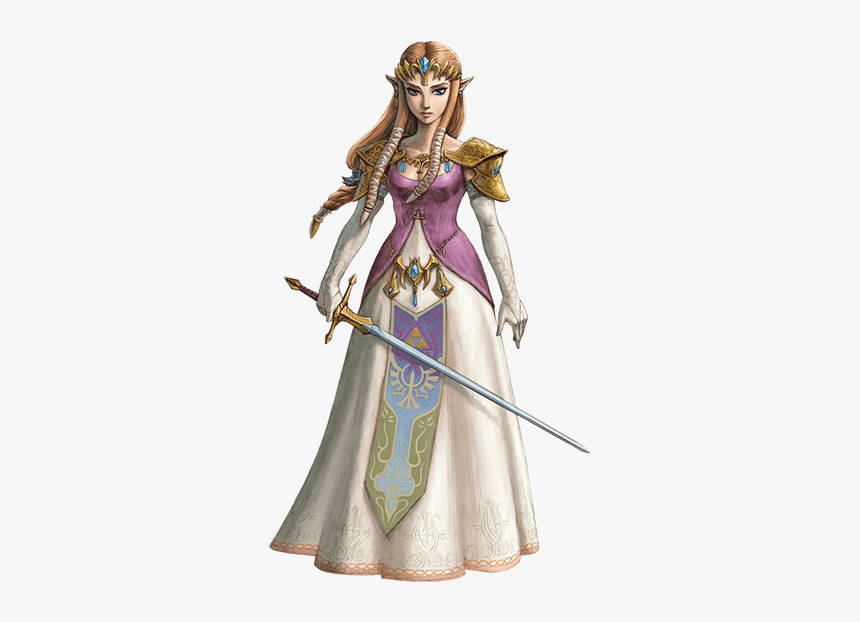 “Zelda was the name of the wife of the famous novelist Francis Scott Fitzgerald. She was a famous and beautiful woman from all accounts, and I liked the sound of her name. So I took the liberty of using her name for the very first Zelda title,” Shigeru Miyamoto explained in an interview with Amazon.

Influences from both David Lynch and F. Scott Fitzgerald? The Legend of Zelda series is even more cultured than we thought.

Which The Legend of Zelda facts were you most surprised by? Did we leave any off this list that you think need to be included? Let us know in the comments.

In this article:Featured, nintendo, the legend of zelda