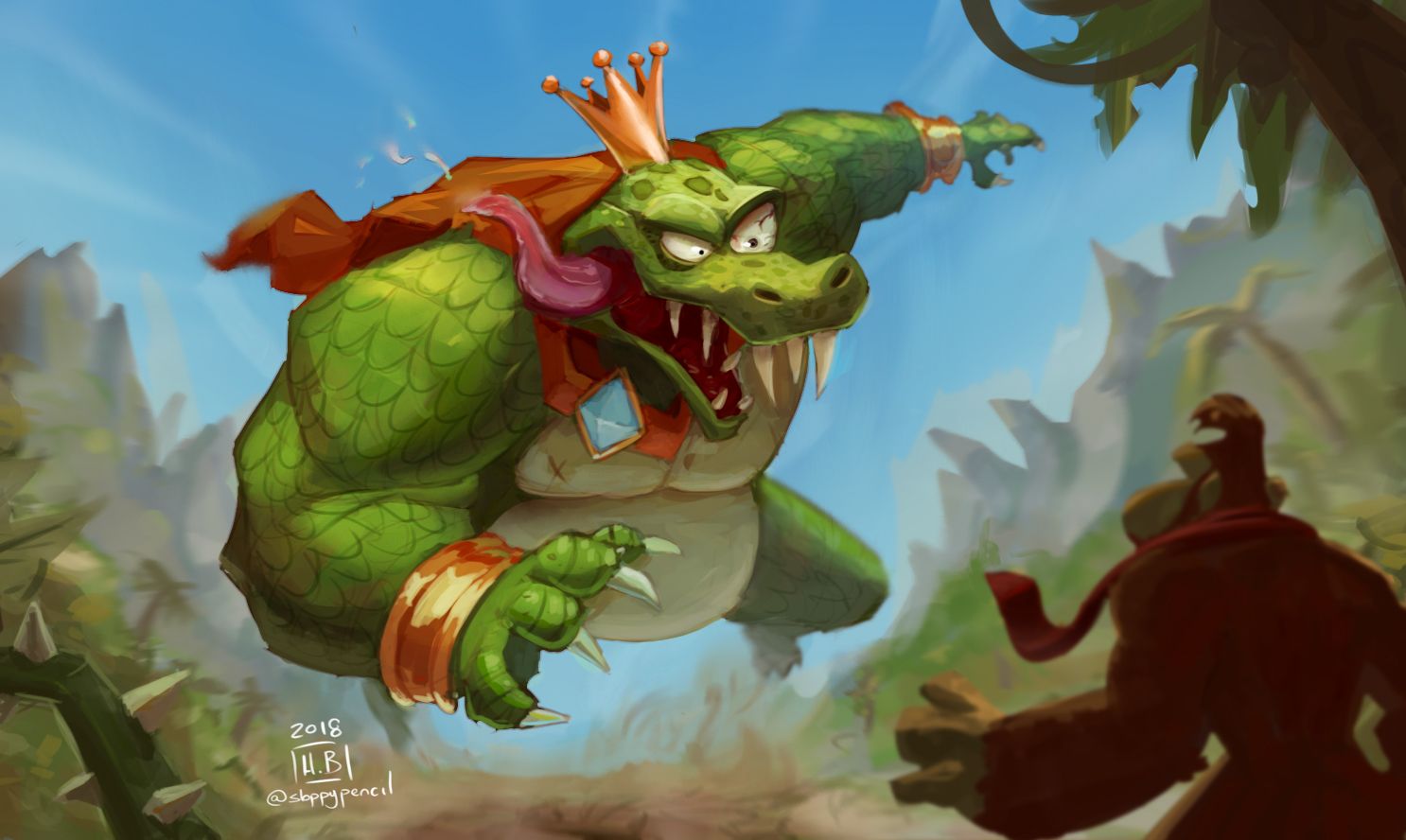 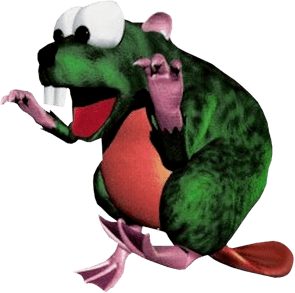 Remember in the last installment of this Donkey Kong Country Retrospective when I said that “even as a 10-year-old kid I felt bad about stomping Gnawty’s head in? He’s just a poor, defenseless little beaver trying to build a dam for his bug-eyed beaver family on Kong Isle?”

You’d figure all that noise would get thrown out the window upon remembering Very Gnawty, a giant version of Gnawty that presides over a stolen portion of Donkey Kong’s precious banana hoard. Not really, though.

Very Gnawty does somewhat go out of his way to attack you, unlike regular Gnawty. Just not very well. Honestly, he just hops around, becoming only slightly more agitated with each successive time the Kongs jump on his head — an action which would likely make anyone angry.

But then again, aren’t you the one busting into Very Gnawty’s lair on the suspicion that he has your bananas? As it turns out, yes Very Gnawty has your precious, purloined banana hoard stockpiled in his lair — but take a quick look around: has he eaten any of the bananas, mishandled them out of spite or even bruised a single peel? Does it even look like he gives a twig-filled s— about Donkey Kong’s bananas? Nope.

Which leads me to believe he wasn’t the one who put your bananas there nor was he even the one who stole them. The whole thing is just a setup by King K. Rool and his Kremling goons with Very Gnawty as the fall beaver.

More proof: What does Very Gnawty do when you stomp viciously on his head? He just turns, looks at the camera and lets out a chuckle. Like, “Hey, these crazy apes are really something, ain’t they?”

But no. Donkey and Diddy Kong just seem to have a propensity for abusing beavers. 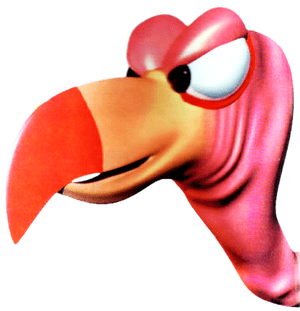 Master Necky is a different story. A disembodied, ungainly looking vulture head who floats there spitting coconuts at you? That’s something you have to kill. And feel absolutely no remorse for doing so. 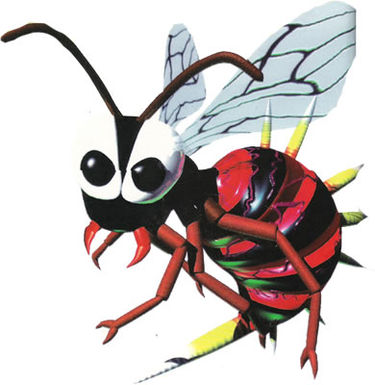 Do you know what the term for an intense fear of bees and wasps is? Apiphobia.

Funny that the word ape is almost the prefix for a term about fearing bees, right? Because Zingers and their boss iteration, Queen B. are some of the tougher enemies Donkey and Diddy Kong face in Donkey Kong Country.

Not only does Queen B. have spikes on her back which, like her Zinger drones, makes her impervious to Donkey and Diddy Kong’s jump attacks — she also has an enormous stinger with which she tries to skewer them.

RELATED:  A petition for the reinstatement of Bot Bootcamp in Halo Infinite

To beat Queen B. players have to throw barrels at her five times. For a short time after she’s hit by a barrel, Queen B. becomes enraged, turns from yellow to red and zips around the screen in an undulating pattern. During this phase, she’s invulnerable and players have to dodge her until it’s once again safe to toss a barrel her way.

I’ve pretty much run out of tongue-in-cheek ways to defend the beaver/Gnawty population of the Donkey Kong Island, so let’s just call this one like it is: a legitimate boss battle.

Compared to Very Gnawty and Gnawty, Really Gnawty has got some ups. He can jump faster, farther and higher than the previous beavers. Also, each time players land a jumping hit on his head, Really Gnawty will leap into the air and try to crush them on his way down; with each hit landed, Really Gnawty adds a corresponding leap.


Or maybe I should go with my gut feeling and stick to my original point of view: the beaver population of Donkey Kong Island is sick of having their numbers decimated by a duo of vengeful apes. They send out their champion, Really Gnawty, the strongest and most robust of their order. Donkey and Diddy, with their avarice for beaver blood, are more than happy to oblige the challenge.

So who’s with me? Shall we start the petition for a long overdue Gnawty’s Revenge video game or what?

Dumb Drum is a giant, robotic oil drum with a red-eyed skull and crossbones on its side that attacks players in two phases.

In the first phase, Dumb Drum levitates in the air and tries to crush players on the way down.

In the second, it releases a pair of enemies (Kritters, Slippas, Klaptraps, Klumps, and Armys, in that order) and continues in its attempts to crush you. To defeat Dumb Drum, Donkey and Diddy have to defeat all the enemies it releases.


Why this method defeats Dumb Drum is kind of unclear. Are we to believe that all the enemies housed inside of Dumb Drum were the ones operating it? Is Dumb Drum operated by some kind of hydraulic cylinder? Are there a bunch of mechanical levers and foot pedals on the inside of Dumb Drumb? If so, Kritters and Klumps would be the only ones capable of operating it; Slippas and Armys, though? They don’t even have opposable thumbs, Fokker.

In retrospect, and despite seeming like the contrary while playing the game for the first time, there really wasn’t much variety in the bosses of Donkey Kong Country. Not a knock on the game but for some reason I remember there being a more interesting variety of bosses than bigger, palette swaps of regular enemies from the game.

Although, in Rare’s defense, they did make a self-aware, meta joke at their own expense: “It’s just like the old days, reusing the boss, changing it’s[sic] color, and pretending it is completely new.” — Cranky Kong


That being said, Master Necky Senior is Master Necky’s father, a lavender-colored palette swap of his son. Instead of just spitting out one coconut at the Kongs from his mouth, Senior is able to spit an increasing number of coconuts at them.

After defeating Master Necky Senior, the Kong’s last boss fight is with the main antagonist of the game…

Although I find the evil alignment of a character like Gnawty dubious, the Donkey Kong Country narrative and creators makes it pretty clear that King K. Rool is definitely malicious in every way towards the Kongs.

When asked why K. Rool stole Donkey Kong’s prized banana hoard, the catalyst for the events in Donkey Kong Country, Gregg Mayles explained that K. Rool wanted to starve the Kongs to death, which would “[enable] the crafty croc to occupy the gorilla’s cosy treehouse pad” (Rareware Scribes, 1999).

Never expected old K.Rool to make it out of DKC, let alone turn up in#SmashBros nearly 25 years later. Maybe I should have spent a bit more than 5 minutes coming up with his slightly rubbish name. https://t.co/X5PZpR54c2

Mayles also explained the “K.” initial in King K. Rool didn’t really stand for anything. “It was just a way of making him seem more important, that he’d added it to inflate his ego… Maybe I should have spent a bit more than 5 minutes coming up with his slightly rubbish name.”

Never expected this tweet https://t.co/3IpVWMAcDU about #KingKRool in #SmashBros to be so popular. As a moderately interesting bonus follow up, an early naming sheet shows K. Rool was going to be 'Kommander' and #DKC was going to be called 'Monkey Mayhem' pic.twitter.com/SvwnOxXN2S


Players face K. Rool on his pirate ship, the Gangplank Galleon. His attacks include a shoulder charge, hurling his crown at the Kongs like a boomerang and dropping cannonballs from the air in a straight line after he’s hit four times.

Did you enjoy that Retbit Retrospective about all the Donkey Kong Country bosses? Which boss was your favorite? Let us know in the comments. 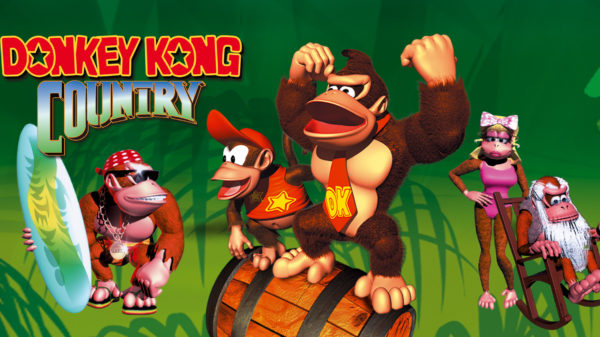 The only game I’ve been playing for the past week is Donkey Kong Country, which was released not too long ago for the Nintendo... 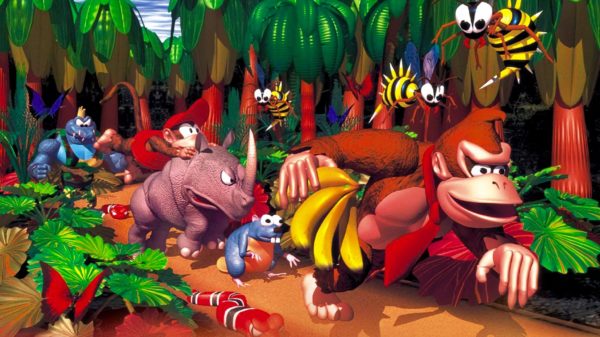