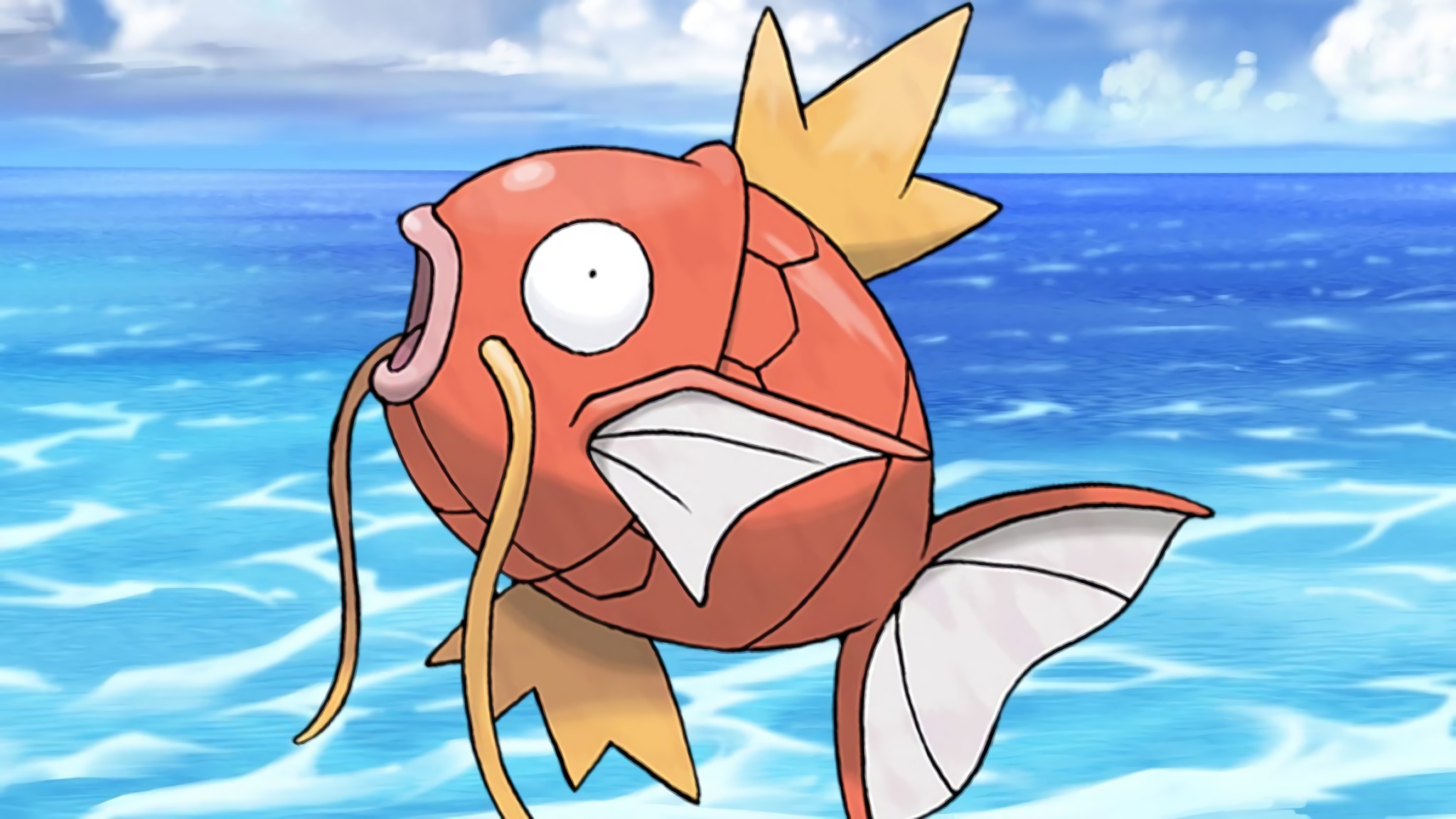 You know that meme you see posted from time to time (or maybe way more than you’d like) on your Facebook timeline, usually by someone in the throes of a distressing period in their relationship?

It goes something like, “If you can’t handle me at my worst then you don’t deserve me at my best.”

If you don’t know what I’m talking about, congratulations. You’re lucky.

If you do, the meme is applicable to the Pokemon Magikarp (and its evolution). In fact, it probably makes more sense applied to Magikarp and the chimerical, serpentine Water/Flying Pokemon into which it evolves than it does to the person who posted it on Facebook.

But let’s not stray from the topic at hand. That being, Magikarp: the ultimate reward for the patient Pokemon trainer in Generation 1.

The first time I caught a Magikarp, Gyarados’ big, red carp/koi fish preevolution I thought, “Alright, I could use another Water Pokemon to shore up my team,” and “Maybe that strange fisherman trainer didn’t know how to properly utilize his school of Magikarp which he used solely to attack me with a move that did no damage and had no effect whatsoever roughly 40 times in succession.”

I soon realized it wasn’t the fisherman’s fault. It was Magikarp’s. Its one usable move, Splash, literally had “No effect,” in battle (besides a dopey looking “bobbing up and down” animation). Magikarp was dead weight in my party of six leveling Pokemon. 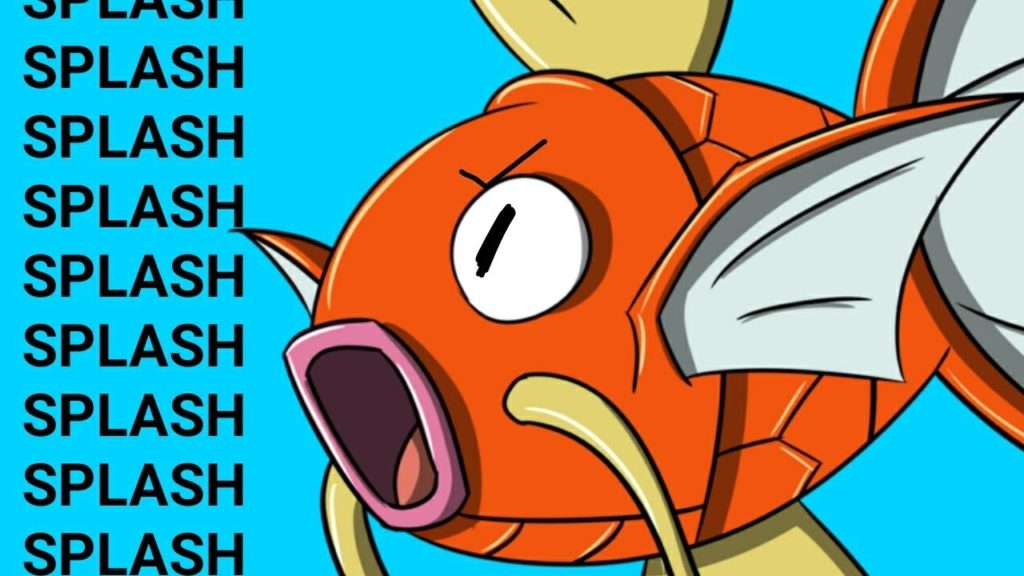 There had to be some catch, right? Why would Game Freak go out of their way to make a Pokemon that was so ineffectual?

For some inexplicable reason, I pressed on with Magikarp, clinging to the hope that he might turn out to be like some Pokemon analogue to Hans Christian Andersen’s “The Ugly Duckling” fairy tale (Sorry, Psyduck. Not talking about you.)

Countless battles ensued in the following manner: Start with Magikarp. Use the completely counterproductive Splash move. Pray that my opponent didn’t one-shot Magikarp before I switched him out immediately for another Pokemon, one who could, get this, actually deal damage to his attackers.

And then one fateful day the impossible occurred.

After what seemed like a lifetime of watching Magikarp take Raticate claws and Pidgey gusts to the face, gills, operculum and spiny dorsal fin like a gape-mouthed punching bag, the words, “What? Magikarp is evolving!” were emblazoned on my screen.

Like some desert derelict who had stumbled upon a mirage, I questioned if what I saw was even real. What could Magikarp possibly be evolving into? A slightly bigger, less feeble fish that could splash harder? Something that strange fishermen on Route 21 couldn’t use as bait and cheap Pokemon battle fodder?

Little did I know, my diligence was about to pay off. When the pixels had settled on my LCD Game Boy Color screen Magikarp had metamorphosed into an awe-inspiring, undulating, sea-monster dragon of Leviathan proportions.

A Water/Flying dual type with the total highest base stats of the original 151 Pokemon short of the legendaries and Dragonite. Referred to in its PokeDex entry as “The Atrocious Pokemon” and “Rarely seen in the wild. Huge and vicious, it is capable of destroying entire cities in a rage.”

RELATED:  Marvel Ultimate Alliance 3: Playable characters we want to see added most to the game

He could learn Surf. And Body Slam. And the most bad-ass, flavorfully animated Special Move in the game (especially to a 12-year-old): Hyper Beam. No longer would I have to simply Splash my enemies in futility with my thumb in my ass the entire time. I had turned my overgrown goldfish into a harbinger of doom; a 21-foot, 518 pound Kraken (Gyrados’ name in the Pokemon Red and Blue beta was actually Skullkraken). I could lay waste to my enemies and entire cities if I felt like it.

In retrospect, all the struggling I’d endured with Magikarp made the evolutionary journey into Gyarados, my new favorite Pokemon all the more enjoyable. I’d earned this beast. 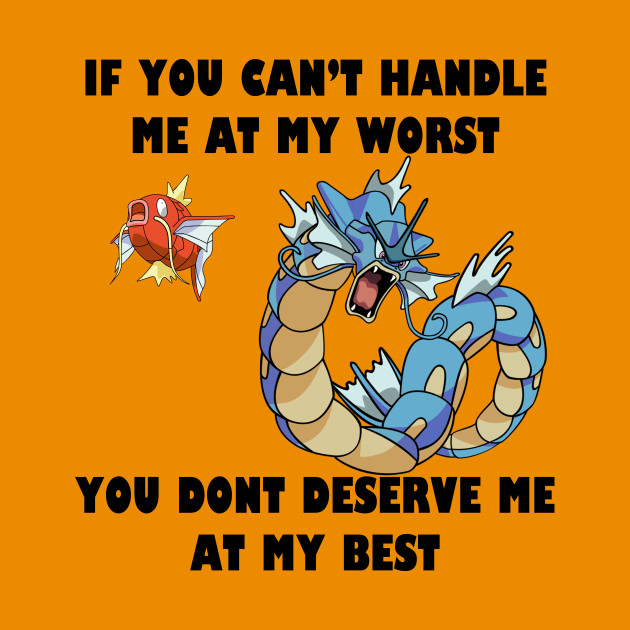 Like the Facebook meme, I’d been through the bad times with Magikarp to see him develop and grow into what I had irrationally held out hoped he could become. And it had paid off.

“If you can’t handle me at my worst you don’t deserve me at my best” indeed, Gyarados.

Do you remember the first time you leveled a Magikarp to Level 20 in Pokemon Generation 1? Were you as shocked and pleasantly surprised in its evolution as I was? What are some of your defining Pokemon or gaming moments in general? Let me know in the comments or send me a line at [email protected].

An open-world Pokemon game set in a feudal Japanese setting? What a time to be alive!