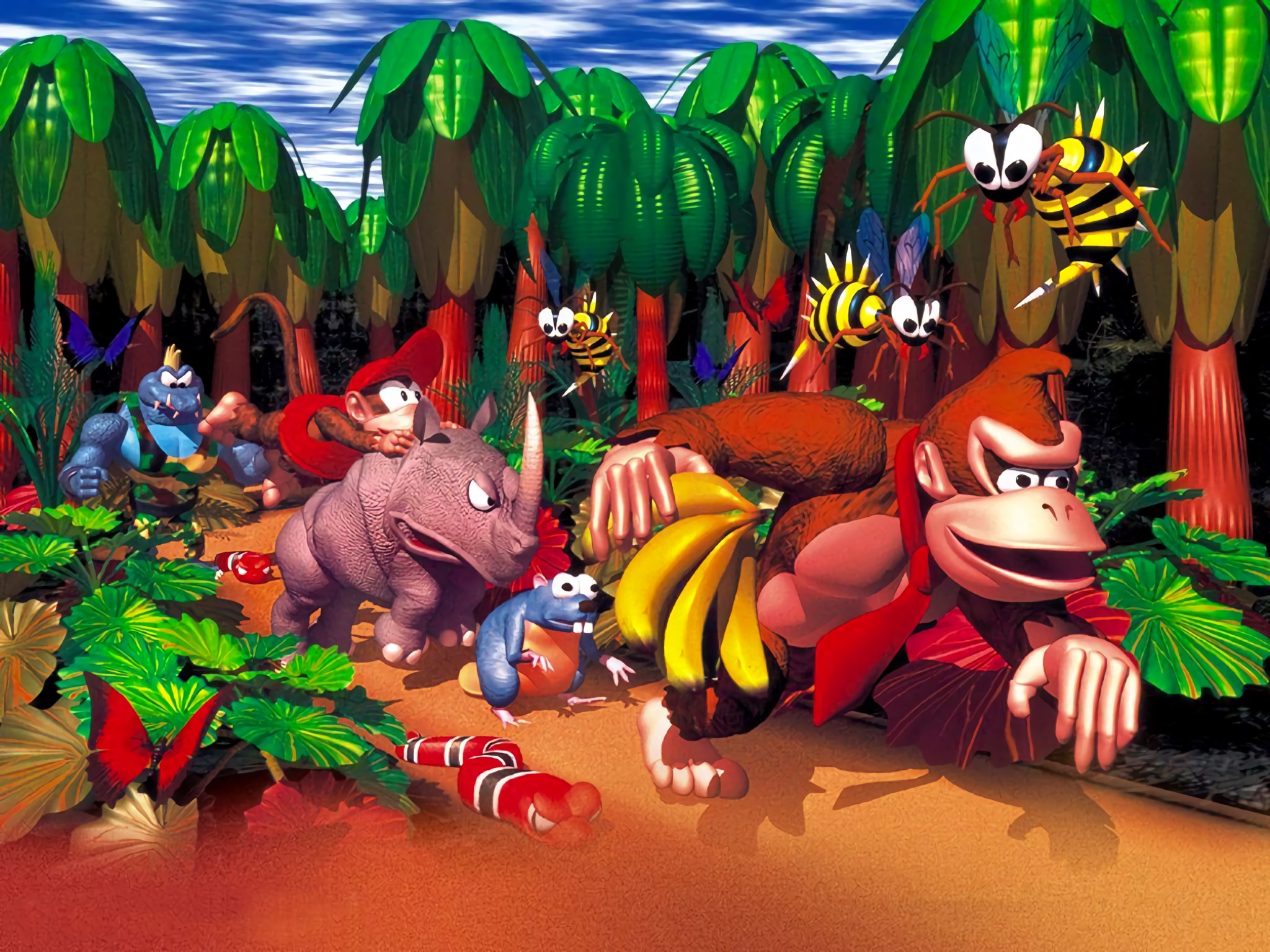 1994’s Donkey Kong Country is one my favorite video games of all time. And not just because it was the third best-selling SNES game of all time or because of its (at the time) groundbreaking Silicon Graphics-rendered 3D sprites but because it reenvisioned Donkey Kong and his friends as the protagonists of their own fully-realized world.

And what is a hero without a worthy set of foes? The following retrospective takes a look at all the Donkey Kong Country enemies you loved to hate from Rare’s hit platform title. 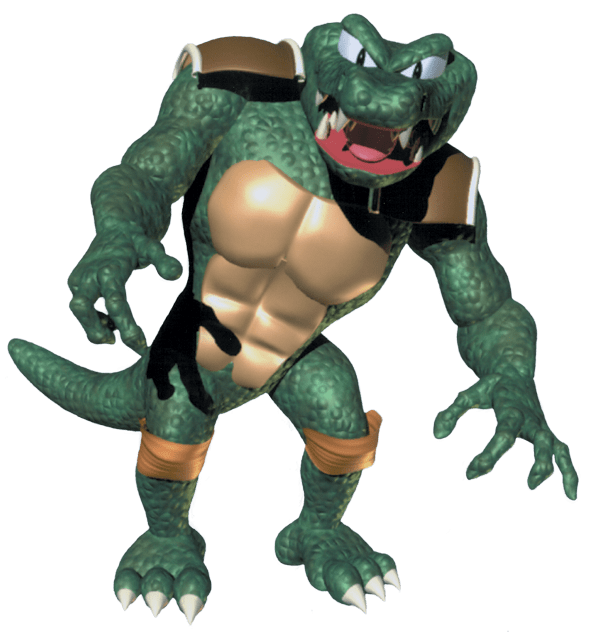 Kritters, blue-green skinned, upright reptiloids wearing shoulder pads and knee-wraps are one of the most recurring underlings in King K. Rool’s Kremling Krew. Though they come in great numbers, they’re one of the easiest of the Donkey Kong Country enemies to defeat — like the Kremling equivalent of the Putties in Mighty Morphin’ Power Rangers or Koopa Troopas from Super Mario.

Kritters come in a few color varieties: green, who walk in a straight line towards Donkey Kong and Diddy Kong; brown, who can repeatedly leap up and down in a fixed spot; blue, who can jump up and down while moving towards the Kongs; yellow, who can leap back and forth in a set path; and gray Kritters, whose initial hops can build towards one big, high jump, in addition to moving forwards the entire time. 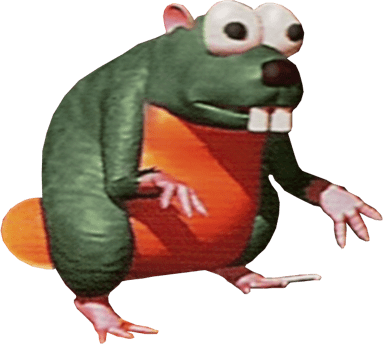 Along with Kritters, these bug-eyed beavers are the most commonplace and expendable enemies in Donkey Kong Country.

Not gonna lie, 10-year-old me felt kinda bad stomping these guys out. Despite their name being a portmanteau of the words “gnaw” and “naughty,” Gnawties don’t really do anything to suggest they’re misbehaving. They kind of just waddle around aimlessly — and not even in a combative way towards Donkey and Diddy. This to me suggests they’ve probably wandered away from their lodge in search of food. Or maybe some wood so they can build a dam and make sure their home doesn’t wash away. Basic self-preservation instinct you’d expect from any living organism.

Second, and building on the first point, they don’t even seem like they’re part of King K. Rool’s gang or anything. So basically our “heroic” Kongs are just committing unwarranted acts of animal cruelty on the poor, unsuspecting Gnawty population of Donkey Kong Island.

Of course, the same can’t be said of Very Gnawty and Really Gnawty (who we’ll talk more about in the next installment). 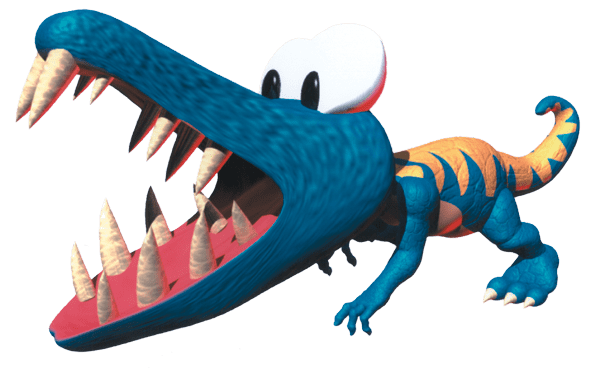 If Kremlings are upright crocodile men, Klaptraps are their quadrupedal cousins more akin to real life crocodiles. Tiny crocodiles, that is. Tiny crocodiles with comically oversized jaws and teeth — meaning Donkey and Diddy can’t attack them head-on with a Roll or Cartwheel.

Because of their small stature it’s usually a better idea to just jump over a Klaptrap; they’re also perpetually chomping away at the air as they walk too, so jumping over them avoids this too.

The majority of Klaptraps appear light blue with yellow stripes going down their backs, but a few other color variations crop up too, like red, green and purple. The purple ones specifically appear in the fourth level of the Chimp Caverns zone, “Loopy Lights.” These variations have the ability to jump when the Kongs do, making them even more difficult to avoid. 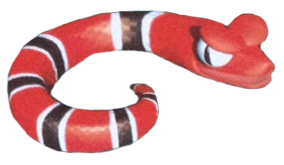 Slippas are red snakes with black and white stripes that kind of look like real-life coral snakes.

Found only in mine and cave levels, Slippas slither at players, make a distinctive hissing sound when they’re defeated ( and according to the instruction manual, “like to live in oil drums.” This sheds some light on why the Black Drums in the Misty Mines level can spawn Slippas in perpetuum.

Retfact: Slippa was named Hister in unfinished versions of the game. 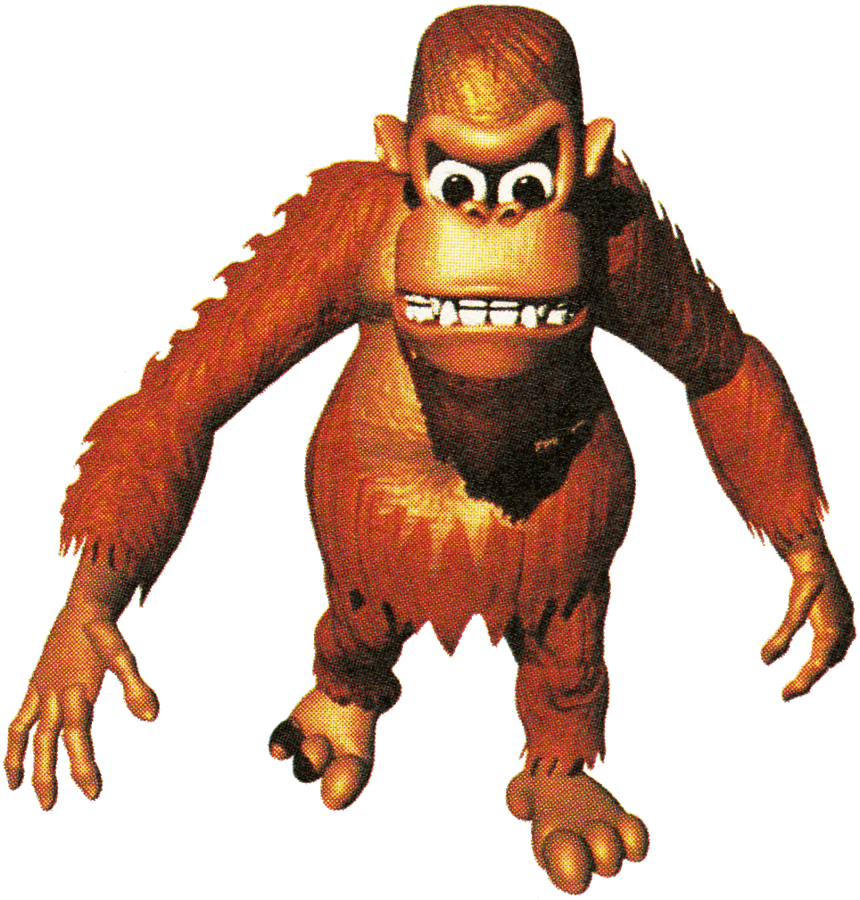 Manky is British slang for “unpleasantly dirty and/or smelly.”

Which is a pretty apt descriptor for this grimy-looking ape who, according to the DKC instruction manual is a “Kong reject orangutan.” Why exactly Manky was rejected from the Kong family is unclear but his bedraggled fur, mean mug and unsightly teeth probably didn’t do him any favors. 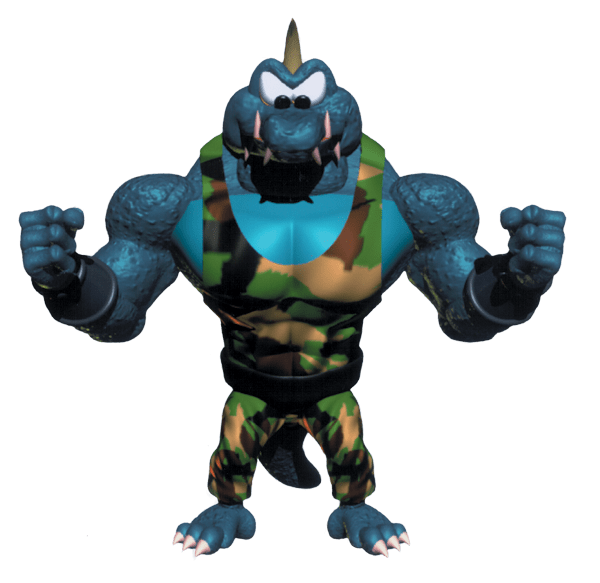 We’re not sure when King K. Rool got into the anabolic drug trade or what such a thing would even consist of in the DK Isles, but Krusha is pretty much a geared-out Kritter.

Because they’re absolute reptiloid units, these yellow-mohawked, camouflage tanktop wearing elites can flex off most attacks from the Kongs short of jumping on their heads, barrel tosses or goring them with Rambi the Rhino.

In the last level of the game, “Platform Perils,” a rare gray variant of Krusha (with an orange mohawk and purple camos) appears who is even stronger than usual and can only be defeated with a thrown barrel. 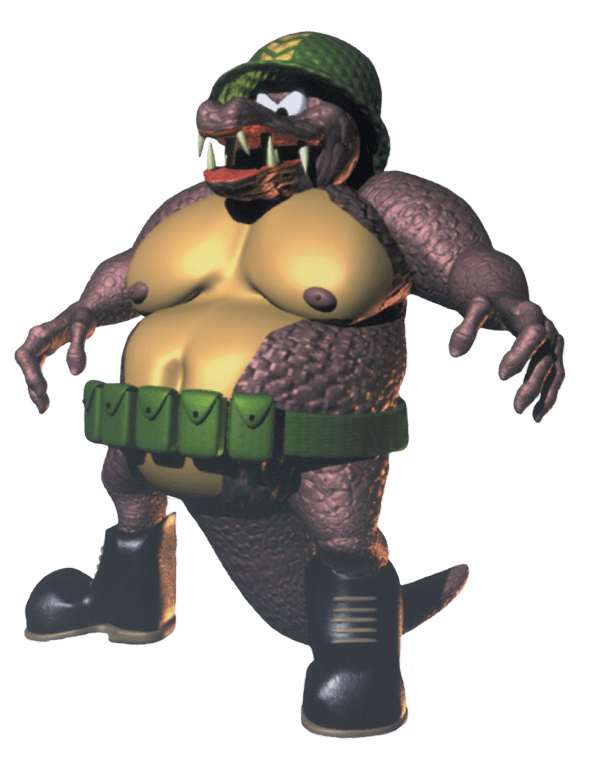 If you’ve seen the movie Nutty Professor starring Eddie Murphy, all we can say about this dude is, “Sherman, 👏 Sherman, Sherman 👏!”

Also, I’m probably looking a little too much into this but whose decision at Rare was it to give Klumps nipples? On some Joel Schumacher Bat-nipples levels of baffling with that one, unless there’s some strange, in-lore, hidden mammalian gene-splicing explanation with Klumps that we don’t know about.

If you’ve seen the movie Meet the Parents, we can also say about this dude, “I have nipples, Diddy. Could ya milk me?” 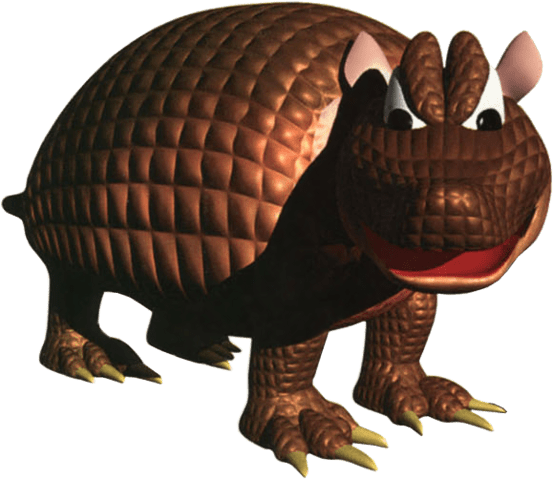 While we’re on a militaristic kick, here’s Army, an armadillo that can roll up into a ball and hurl itself towards the Kongs.

Donkey Kong can beat Army with a single jump attack; Diddy must jump on it twice, once to coerce it from its curled-up position and then a second time in its unguarded state. 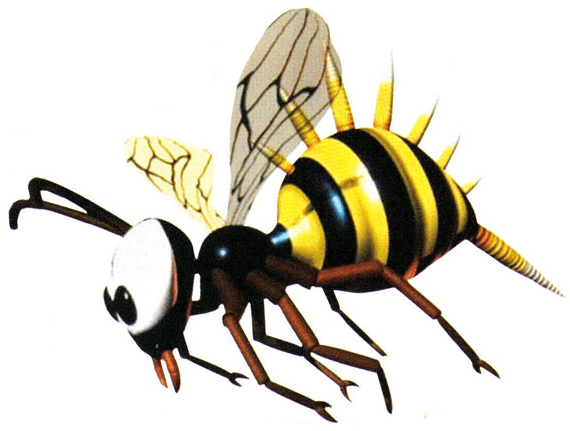 Zingers are giant wasps with a row of spikes similar to their stingers lining their backs. They can’t be killed by conventional means, so Donkey and Diddy either have to beat them with a barrel toss or while mounted on an animal friend.

Zingers appear in nearly every level in the game and come in a variety of colors besides the regular yellow and black, each one with a different flight pattern. 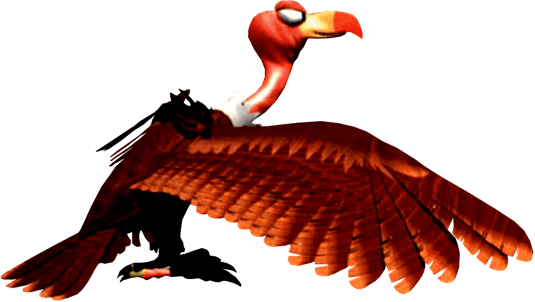 Gangly vultures who toss nuts at the Kongs from above or fly back and forth across the screen. 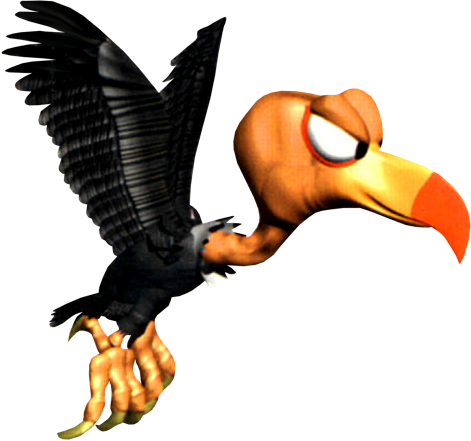 A smaller version of Necky who can spit nuts at the Kongs; some of them do this while moving up and down the screen. 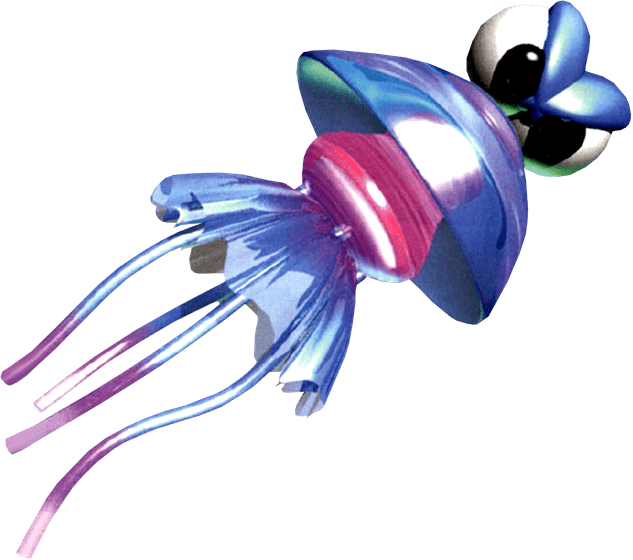 A scooting jellyfish with two big eyes on top of his head. They can be easily avoided, as they’re not overly hostile and sway in simple zigzag patterns across the screen. They can be killed by the Kongs atop Enguarde.

Little piranhas with red-colored bellies. Despite their small size they pack some power; they’re able to damage Donkey and Diddy — even when they’re mounted on their swordfish friend Enguarde. 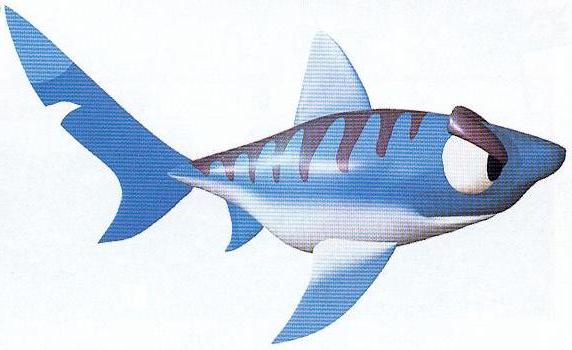 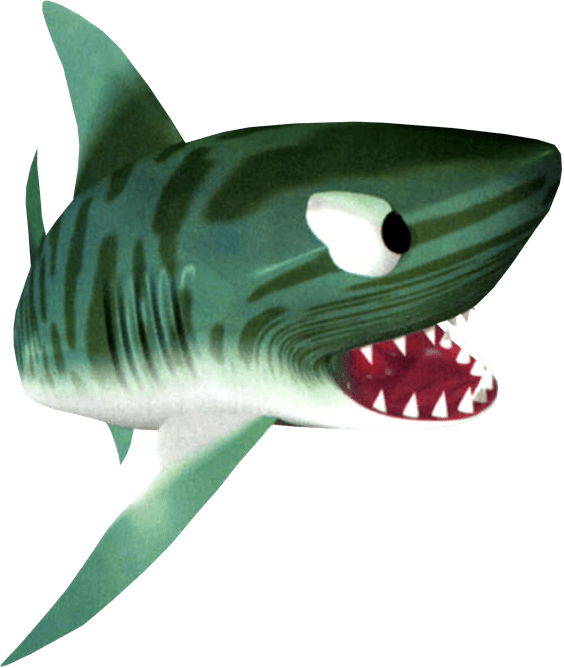 A big, green shark similar in appearance to real-world tiger sharks. They’re the slowest moving underwater enemy but they make up for that with their size, as they’re able to reach Donkey and Diddy from further away. 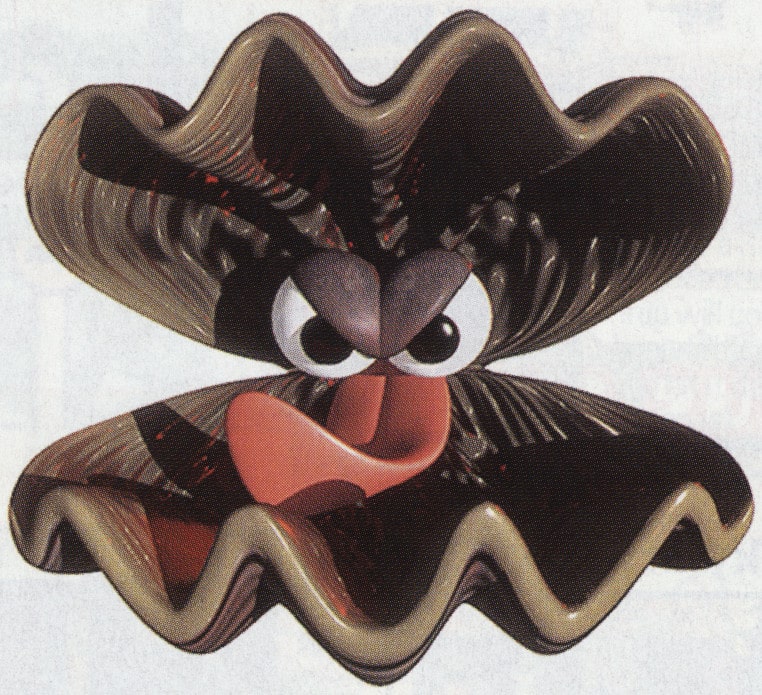 Clam enemies with big eyes and waggling tongues. They attack the Kongs by spitting pearls at them. They can’t be defeated by the Kongs, even with Enguarde. 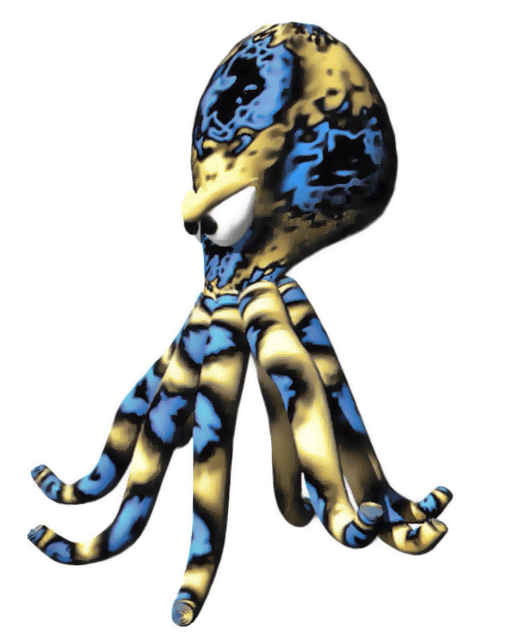 An octopus that swiftly spindles through the water; it comes in purple (moves in a fixed pattern around the coral reef walls) and blue (quickly pursues the Kong after they passes) varieties. Much like Clambo, they can’t be defeated even with Enguarde. 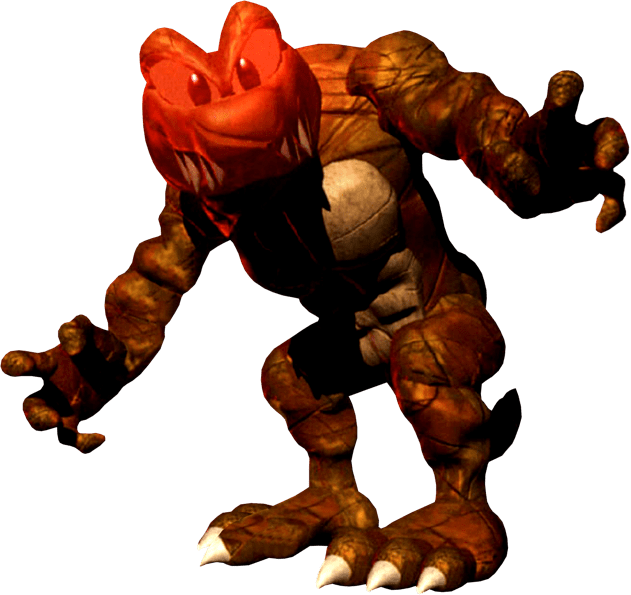 Kremlings with rocky, earth-brown skin and glowing red eyes. Their craggy hide makes them durable and resistant to any of the Kongs’ attacks.

Rock Krocs appear in only one level, the Stop & Go Station, where players must bypass them through strategic use of alternating Stop & Go Barrels; when a player jumps into one of the Go Barrels, they switch to a “STOP” status for a few moments, causing the Rock Krocs to curl up into a boulder and cease their attacks. After this, the barrels switch back and the Rock Krocs continue their offensive.

These guys haven’t appeared in any Donkey Kong Country games since the original although due to their gimmick it’s pretty easy to see why. That being said, Rock Krocs have one of the coolest designs in the game, although I do have an inclination towards golem-based creatures.

Check out this thoroughly amusing Donkey Kong Country Enemy Randomizer playthrough from Nintendo Addict, which randomizes the locations and appearances of all the Donkey Kong Country enemies in the game. Want to see a Croctopus flailing around in an non-underwater level like Jungle Hijinks? Or see Donkey and Diddy riding around on Enguarde in mid-air in Barrel Cannon Canyon?

Next up:A look back at all the bosses in Donkey Kong Country.