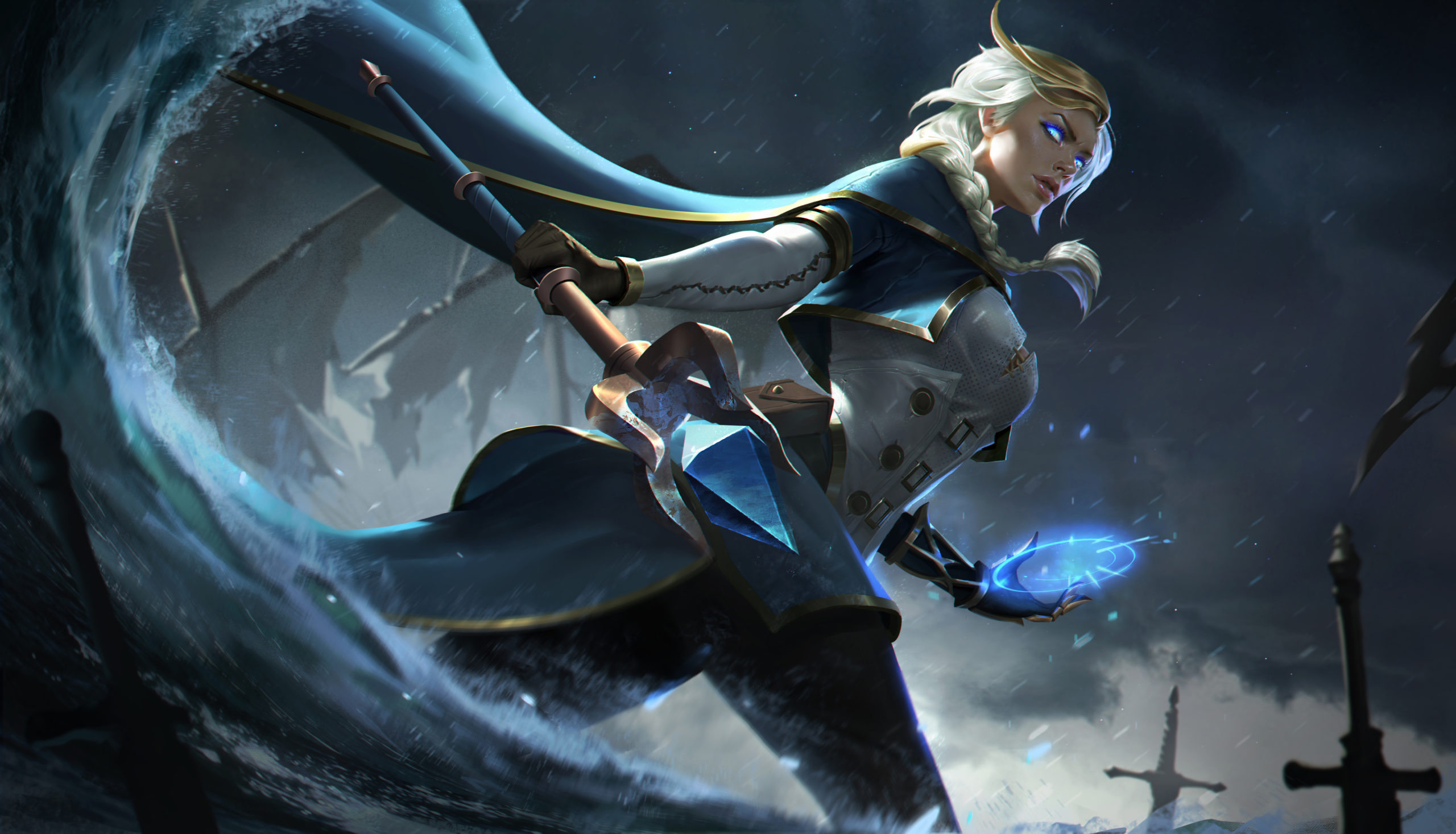 Heartstone fans might know Jaina Proudmoore as the default Mage Hero, but how much do you really know about the Daughter of the Sea, leader of Theramore, former fiancee of the Prince of Lordaeron and one of Azeroth’s most powerful mages?

Hearthstone‘s new solo Mage adventure, brings players through Jaina’s journey from fledgling mage student to one of the most powerful spellcasters on all of Azeroth. If you want to help Jaina defeat the likes of Garrosh Hellscream and Archimonde, use our Jaina Proudmoore Book of Heroes walkthrough to assist in the evolution of one of World of Warcraft and Hearthstone‘s most iconic characters. 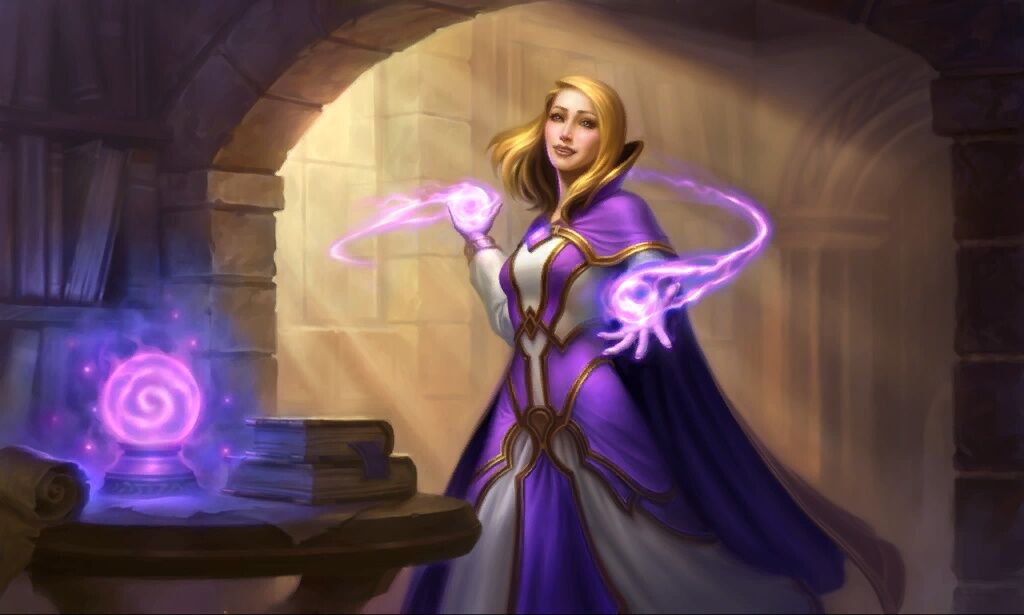 Jaina’s first challenge isn’t so much of a battle with Antonidas, one of the most powerful and respected mages in Lordaeron (and a staple card in most Mage decks for some time after Hearthstone’s release), as it is her ingratiating herself to the Archmage and seeking his tutelage.

Jaina, known as Scholar Jaina at this point in the story, wishes to be the best mage she can possibly be and will accept no other teacher than Antonidas. 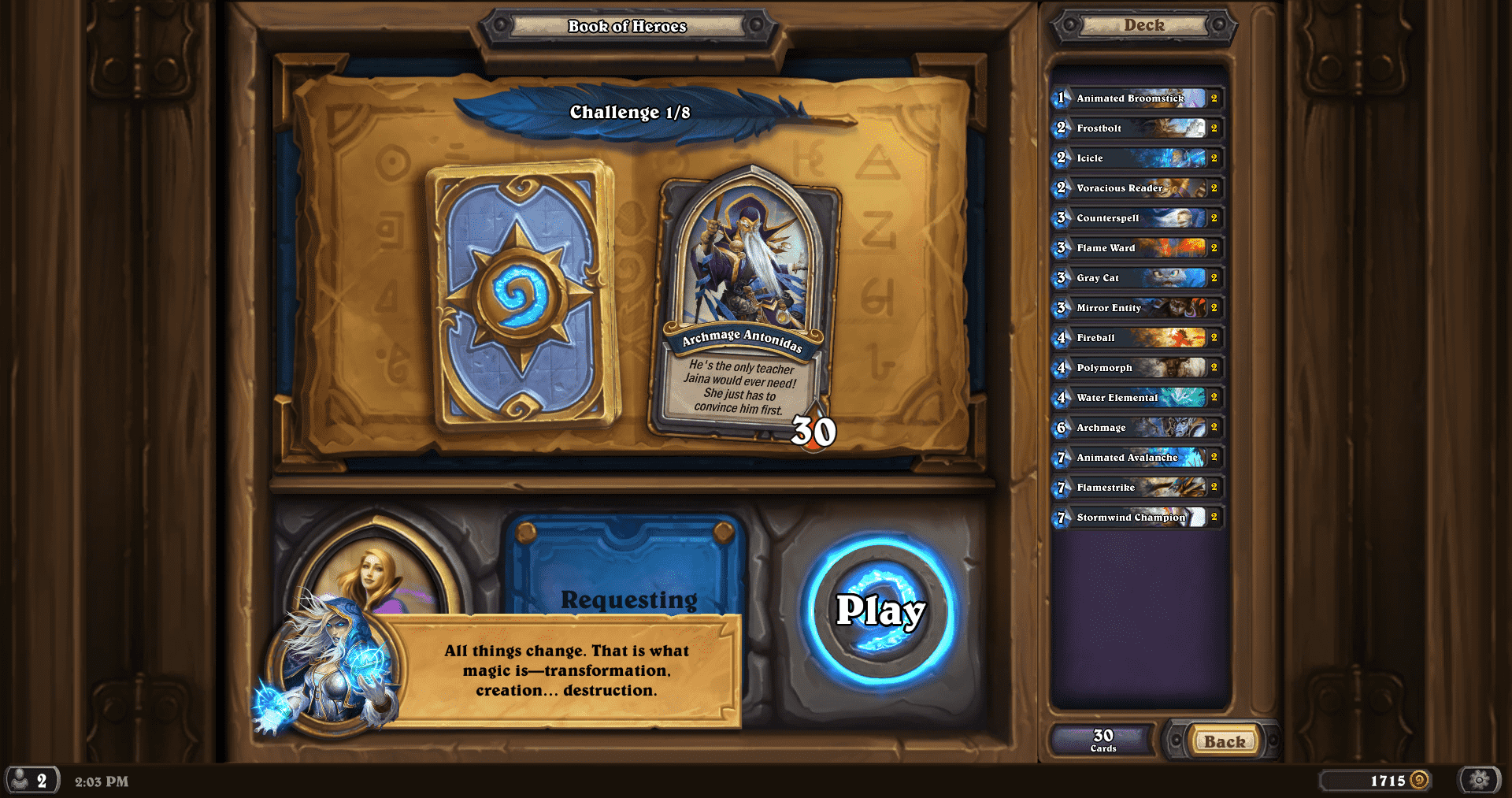 As far as fights go, this is a very straightforward one. Use your Hero Power to take care of smaller minions the Archmage lays down while whittling away at his Health with Spells and minions of your own. Don’t be afraid to play your cards often as Antonidas will play Research Project, a Spell which draws 2 cards for each player, which will burn your extra cards anyways if your hand is too full.

Antonidas also has Arcane Explosion (which hits twice thanks to his Hero Power) and a pair of Twilight Flamecallers in his arsenal, so trade minions judiciously; if you’re able to set up a Water Elemental + Animated Avalanche combo, the match should be a lock in your favor.

Archmage Antonidas wasn’t the only member of the Council of the Six, AKA the ruling council of Kirin Tor mages that protected Dalaran, who took notice of Jaina’s proficiency as a mage. One such example was Prince Kael’thas, who was not only enamored with Jaina’s talents but her beauty as well. Unbeknownst to Kael’thas however, Jaina’s heart belonged to another blonde-haired Prince. But before we get into that… 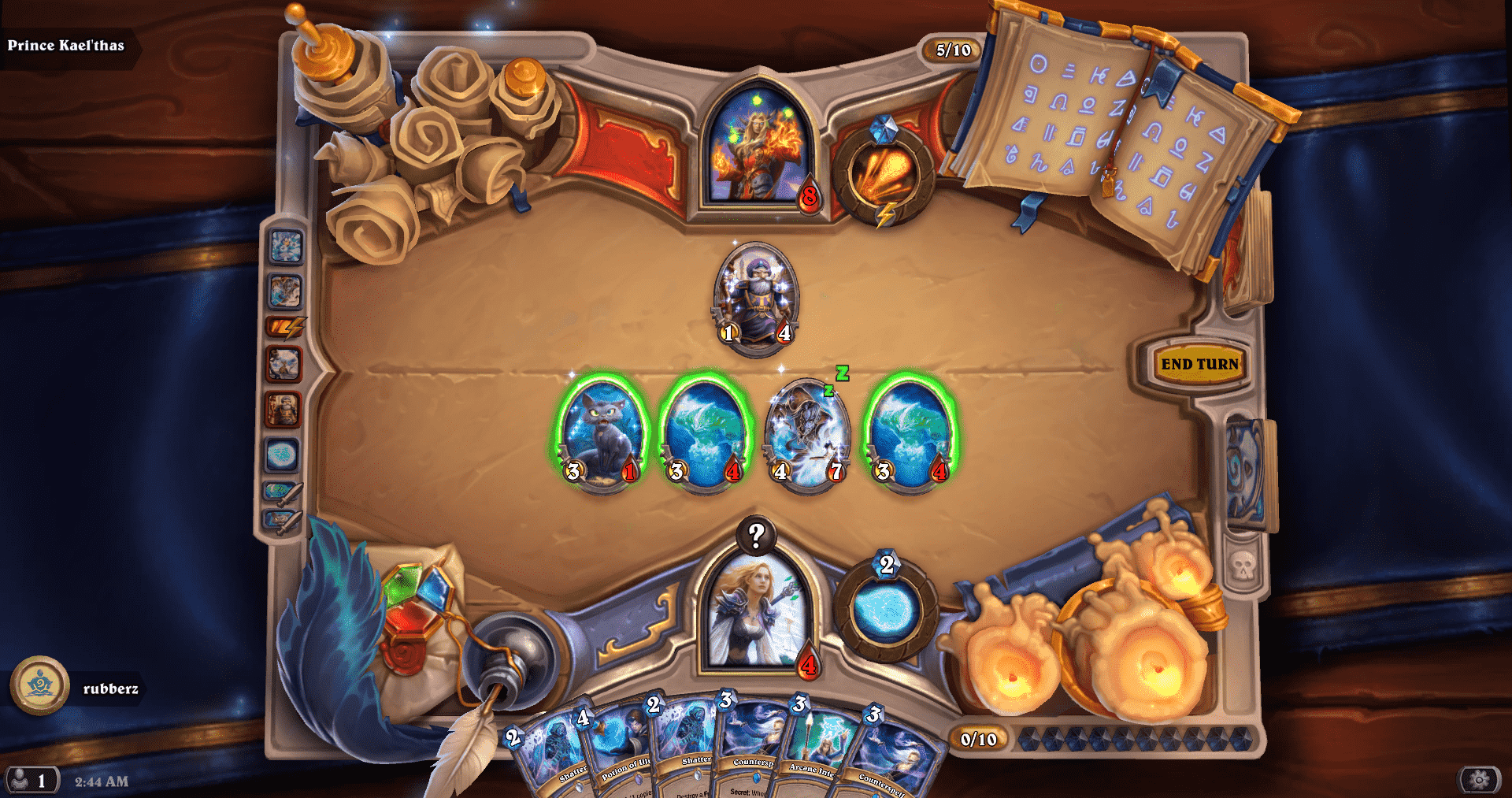 Kael’thas’ Hero Power: Firemancy, Passive Hero Power – After you cast a spell, add a Fireball to your deck. It costs (2) more.

Kael’thas isn’t just a smooth-talking Blood Elf — he can also be one of the trickier fights in Jaina’s Book of Heroes adventure until you get the strategy down. What worked best for me was whittling away Kael’thas’ health with Jaina’s Hero Power and establishing Spell Damage minions (Gray Cat, Archmage) on the board until you can get him in lethal range.

It’s also very important that you try to play all your Mage secrets in this match, because you’ll need them all to secure the win. Timing Counterspell to negate a Combustion or Fireball and using Counterspell in tandem with one or more Ice Blocks is a must and the biggest advantage you have

Card draw also helps your chances in this match, so be sure to make good use of Arcane Intellect and Cram Session. the same time you’ll want to delay his victory by trading with, removing, and freeze-stalling all his minions while establishing enough board presence. Make sure to use your Deep Freeze spell against Kael’thas’ trickier minions like A’lar and utilize your Water Elementals to help deplete his health or continue to freeze to set up lethal.

The encounter between Jaina and her star crossed lover, Arthas Menethil, takes place shortly after the infamous Culling of Stratholme incident. During the Culling, Arthas made the grievous decision to burn down the city of Stratholme, thus executing the plague-infected inhabitants before they could be reanimated as Scourge.

In World of Warcraft lore, this incident is considered by many to the tipping point for Arthas — his obsession with vengeance led to him making choices which severed him from his former friends and loved ones — Jaina Proudmoore included. 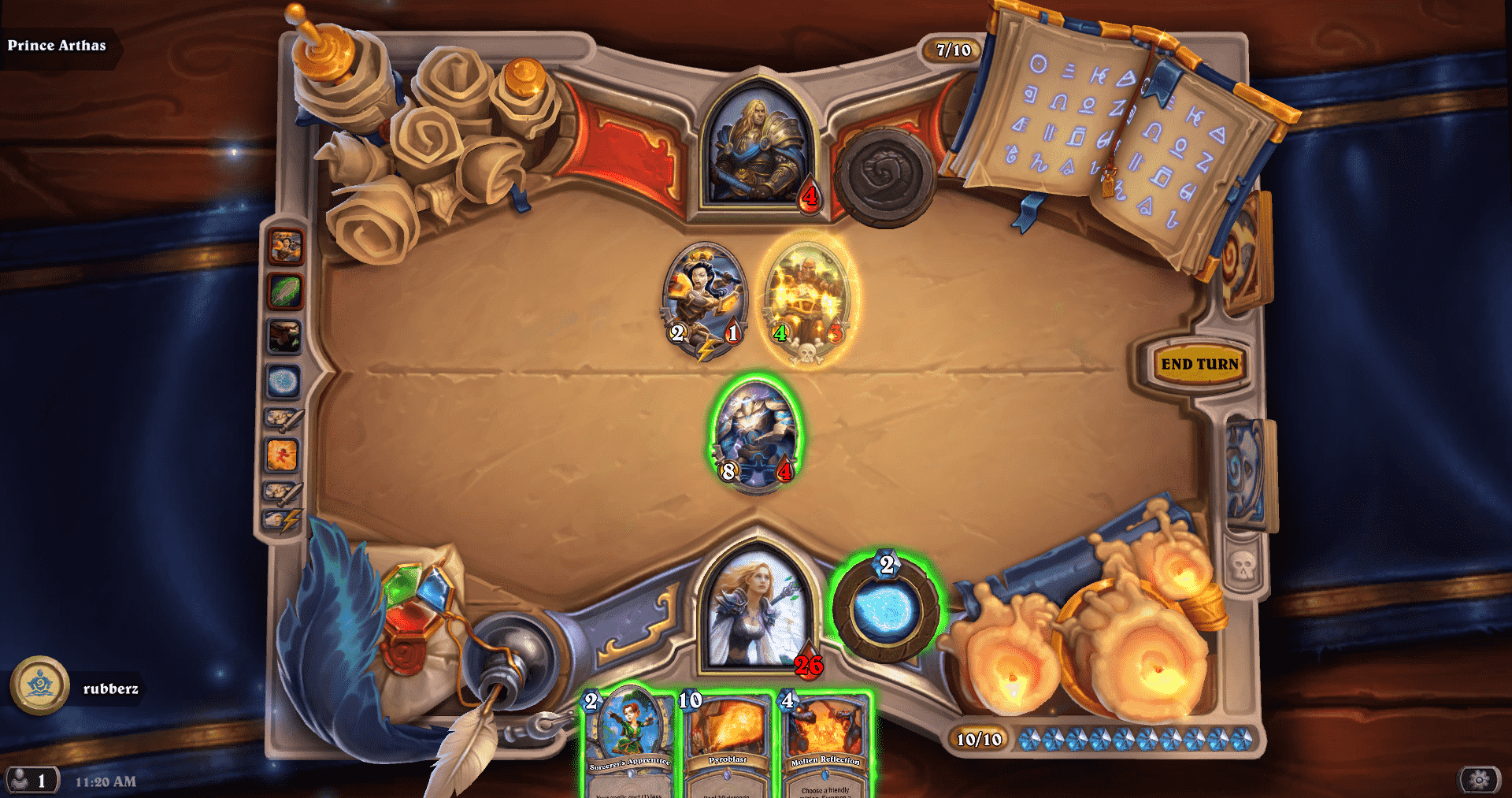 Unlike other fights, you won’t want to establish board presence early in this fight due to Arthas’ Hero Power. Instead, make ample use Jaina’s Iceblast Rank 3 Hero Power to remove minions and chip away at Arthas’ health by going face at every opportunity. 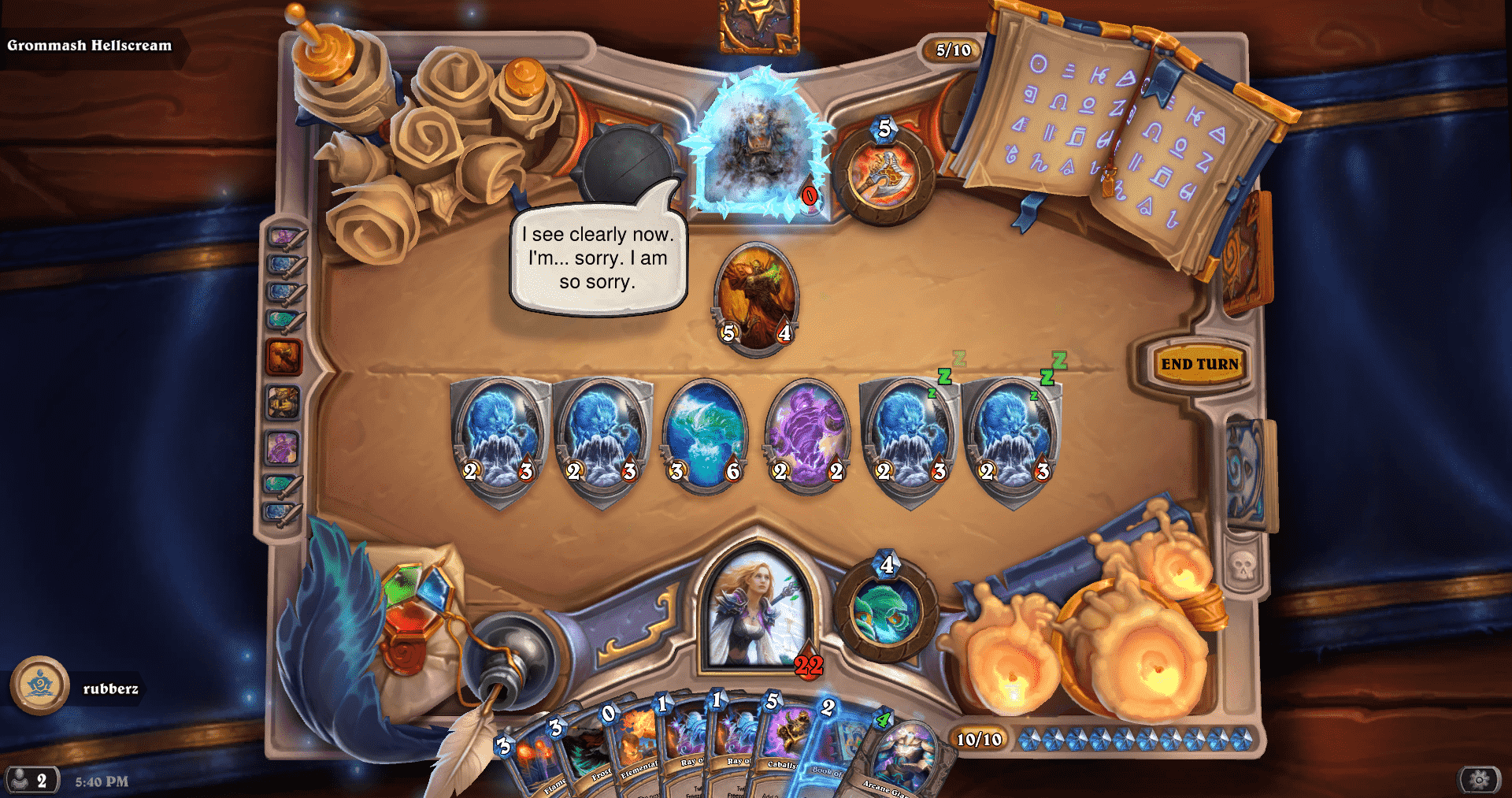 This fight can be very simple (Frost Mages did counter Warriors in World of Warcraft PVP after all) if you employ the following strategy: Keep Grommash frozen.

Once you are to able use your Summon Elemental Hero Power on Turn 4, which summons a 3/6 Water Elemental, do everything in your power to either keep it alive, have it go face to keep Grommash frozen, and/or use it judiciously enough to summon another Water Elemental with your Hero Power to freeze and repeat the process.

This will prevent Grommash from abusing his Hero Power which equips his Legendary axe, Gorehowl.

Thrall will also assist you periodically during this match, summoning pairs of Sparks or Spirit Wolves.

This encounter features Jaina, alongside the defenders of Azeroth, repelling the invasion of the Burning Legion and its commander, the fallen eredar lord, Archimonde. 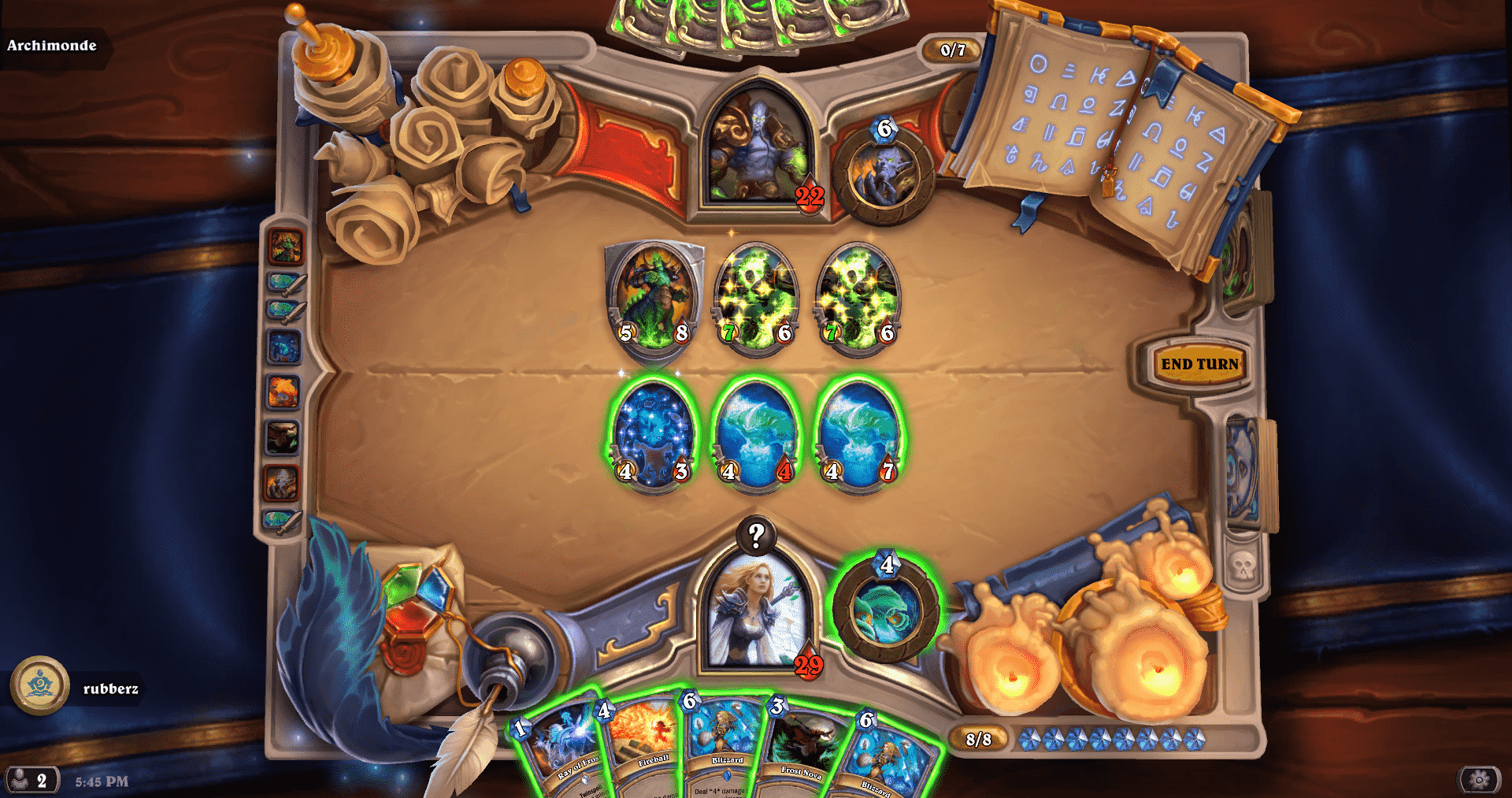 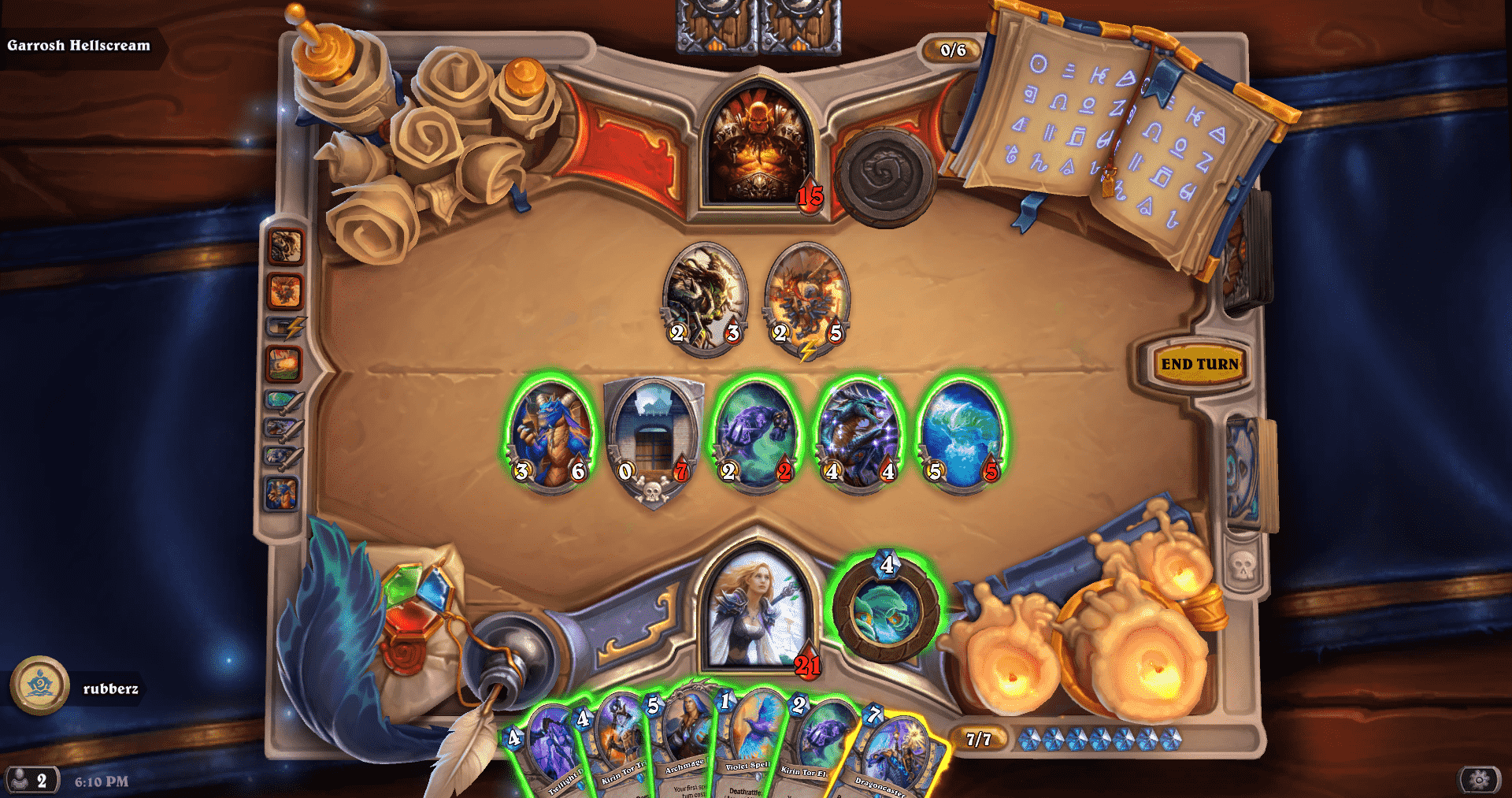 You start this match with four 0/10 Gates of Theramore minions on the board. They have Taunt and a Deathrattle which deals 3 damage to Jaina. Do your best to set up minions on the board behind the gates before Garrosh can bring them down while Garrosh attacks you with a plethora of Pirate minions and Warrior spells.

Thrall, one of the most renowned members of the Horde, confronts Jaina in this encounter after receiving shamanistic visions in the Maelstrom, a gigantic rift formed by the Well of Eternity collapsing upon itself. 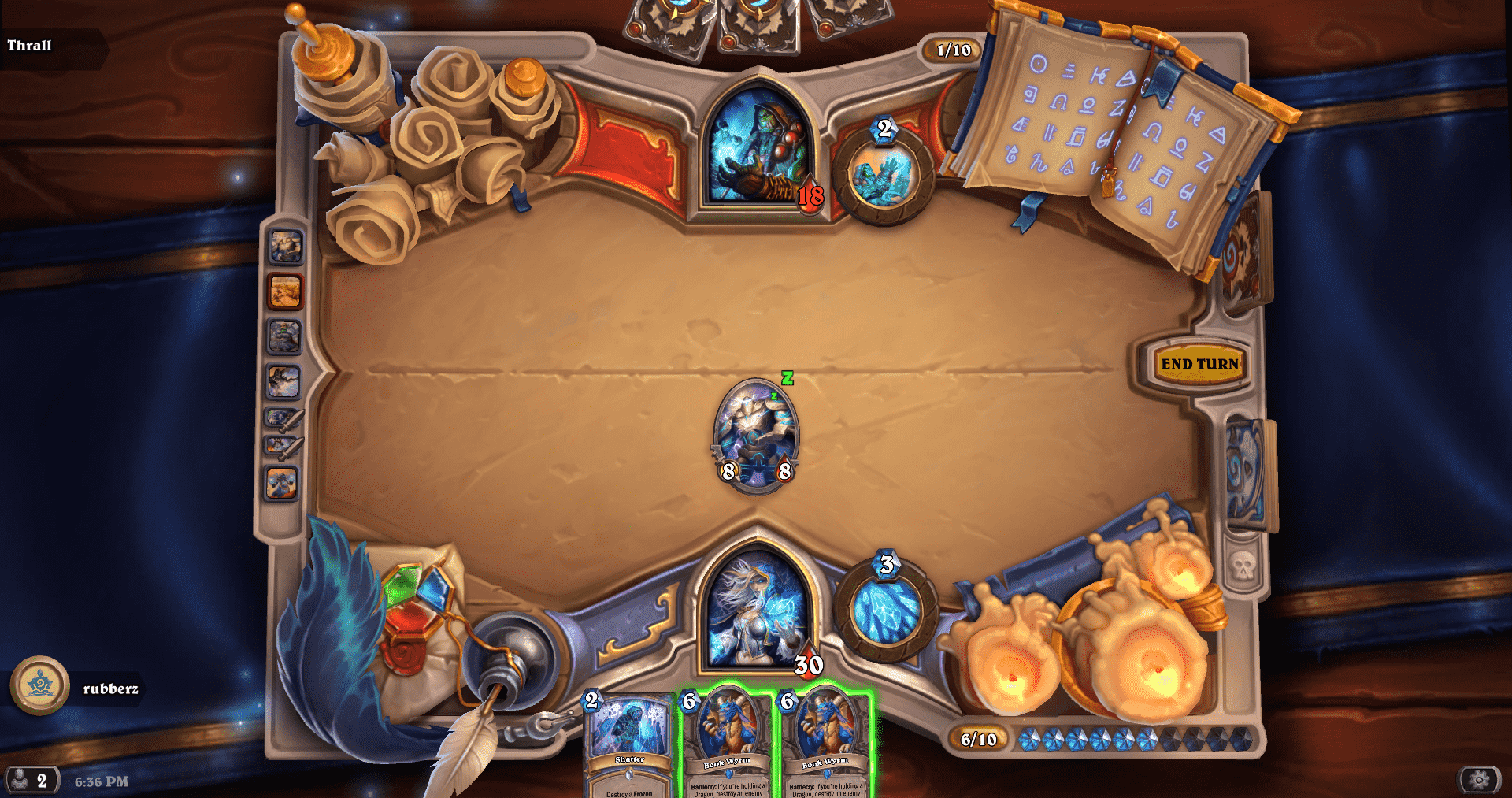 At this point you have plenty of powerful cards at your disposal such as Kirin Tor Elemental, Archmage Kalec and Focusing Iris. Your Hero Power, Icefall, should also be used liberally to clear Thrall’s minions from the board.

Jaina’s final challenge is against another Kirin Tor and Council of the Six member, Aethas Sunstrider. Aethas is a powerful Blood Elf mage who is proficient with the Arcane Mage skill tree. 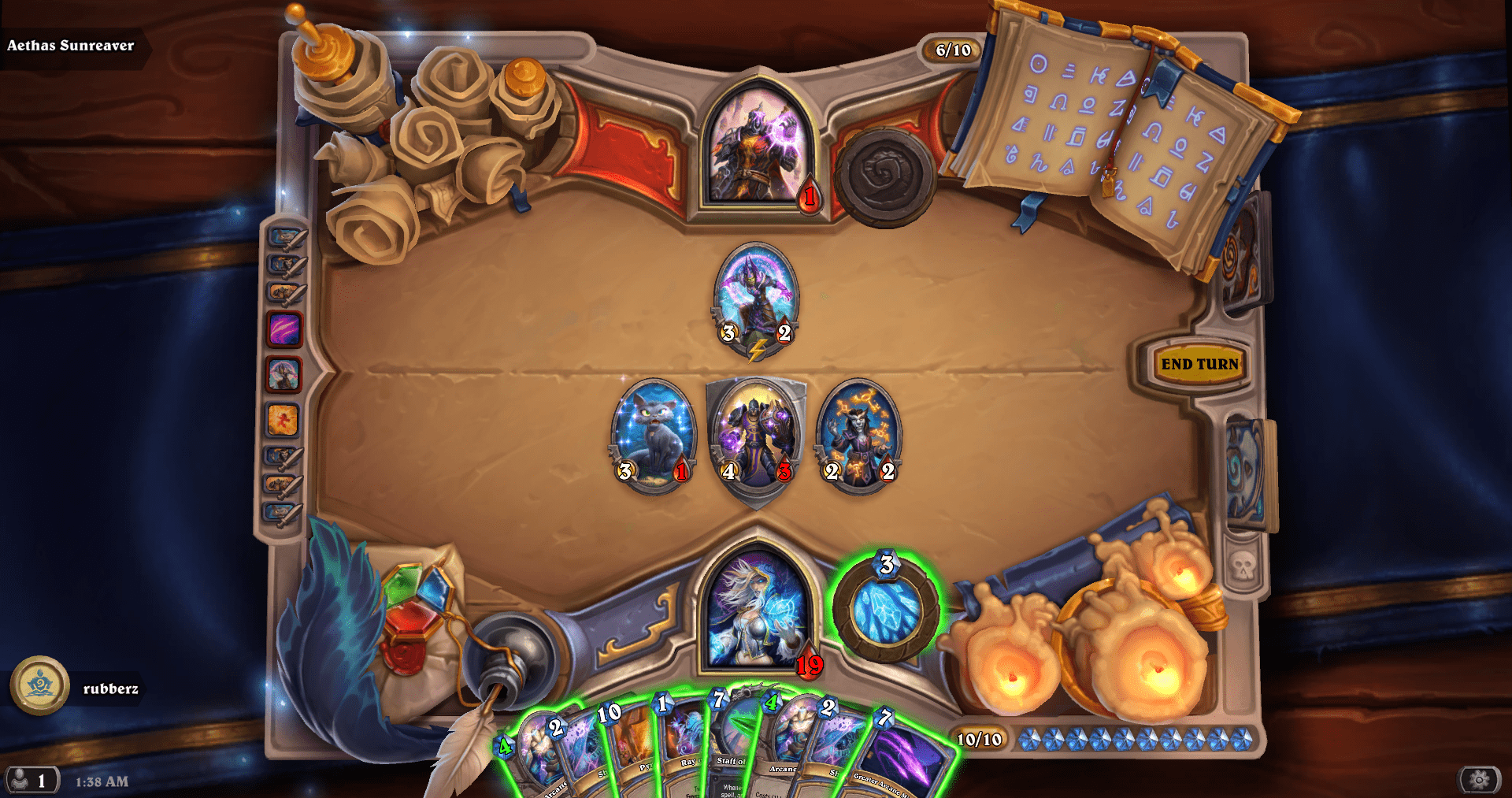 Did this Jaina Proudmoore Book of Heroes walkthrough help you assist Jaina in her journey from fledgling mage student to one of Azeroth’s most powerful sorceresses alive? Are you still having trouble with a certain encounter? Let us know in the comments.

RELATED:  Best new Pokemon in Scarlet and Violet for competitive battling
In this article:book of heroes, Featured 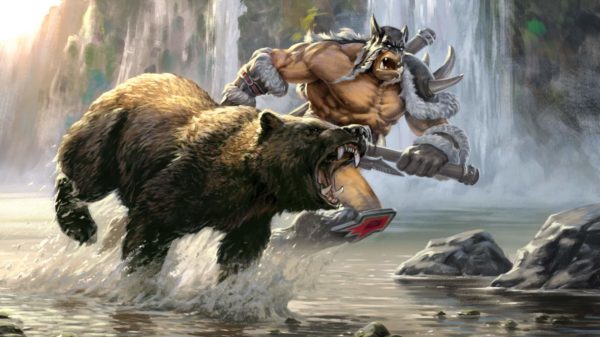