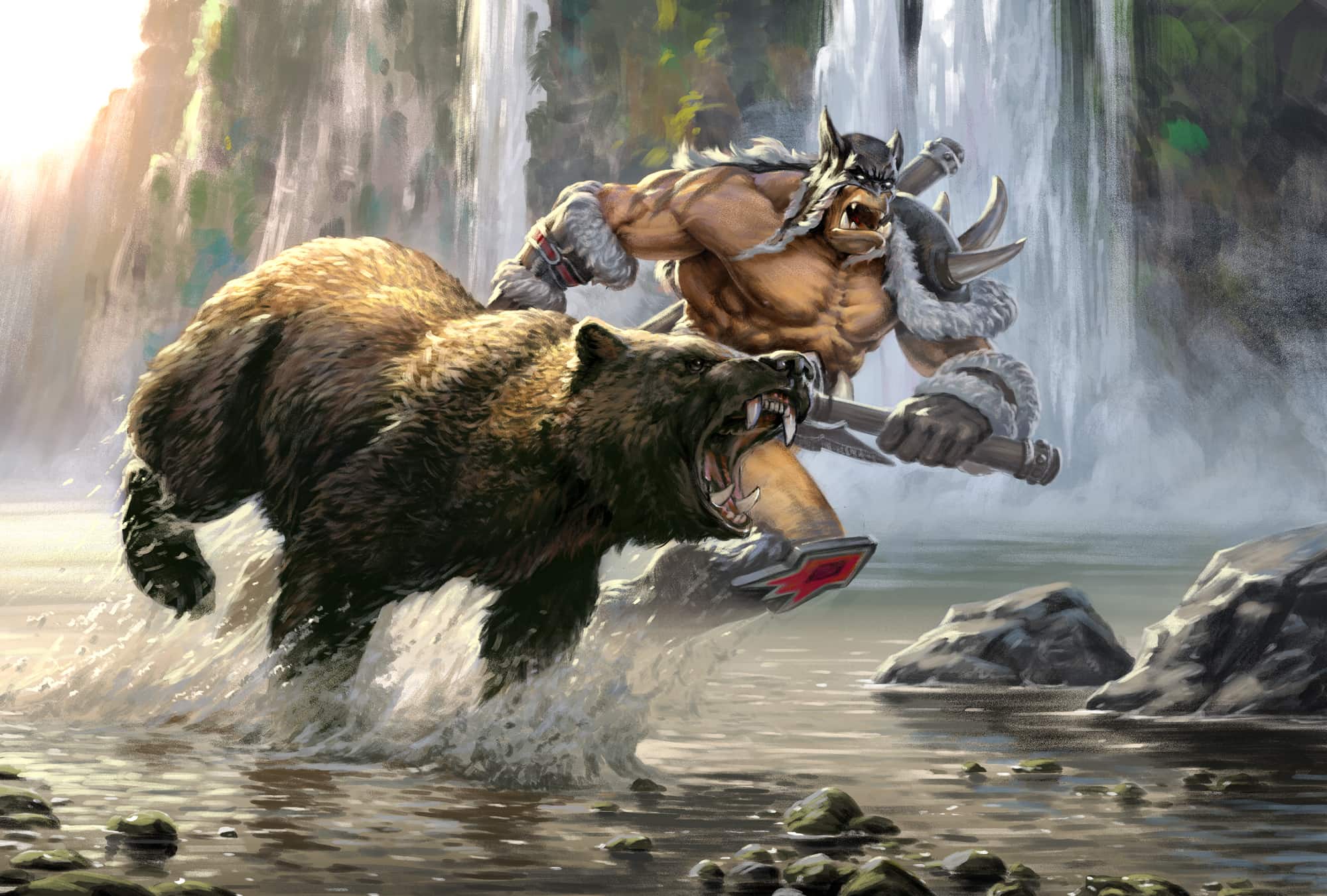 The second Hearthstone character featured in the Book of Heroes solo adventure mode (the follow-up to Jaina Proudmoore’s Book of Heroes adventure) is Rexxar, the half-orc, half-ogre Beastmaster Hunter.

The Rexxar Book of Heroes adventure follows Rexxar’s journey from his homeland in the Blade’s Edge Mountains, a land of sickle-sharp mountain and peaks and dusty canyons in Draenor; to him becoming an outcast of his own tribe, the Mok’nathal; to bestially-attuned nomad; and all the way to vaunted hero of the Horde — but before you can witness his entire story, you have to complete eight key encounters from Rexxar’s life. Our Rexxar Book of Heroes guide will help you through Rexxar’s narrative, from his early dispute with own father Leoroxx to his first meeting with bear companion Misha to a naval battle with Jaina Proudmoore’s father, Daelin Proudmoore. 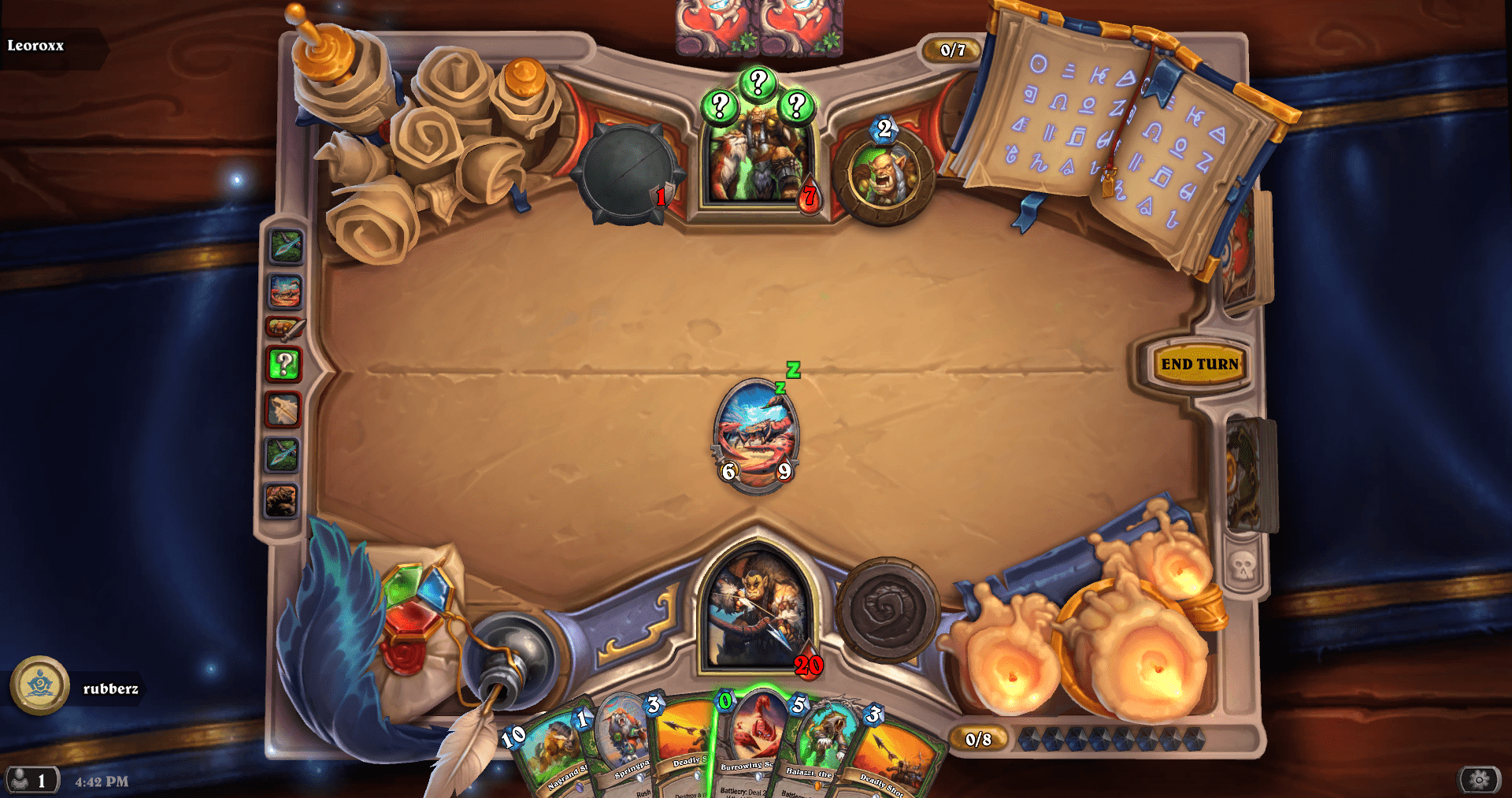 “Rexxar’s father thinks he knows best, but does he truly?”

Leoroxx’s Hero Power: (2) Reprimand: Reduce the Attack of an enemy minion by 1 for a turn.

The first encounter depicts a familial dispute between Rexxar and his very own father, Leoroxx. This is a straightforward fight, although you’ll have to play around Leoroxx’s Secrets and Hunter Weapons. 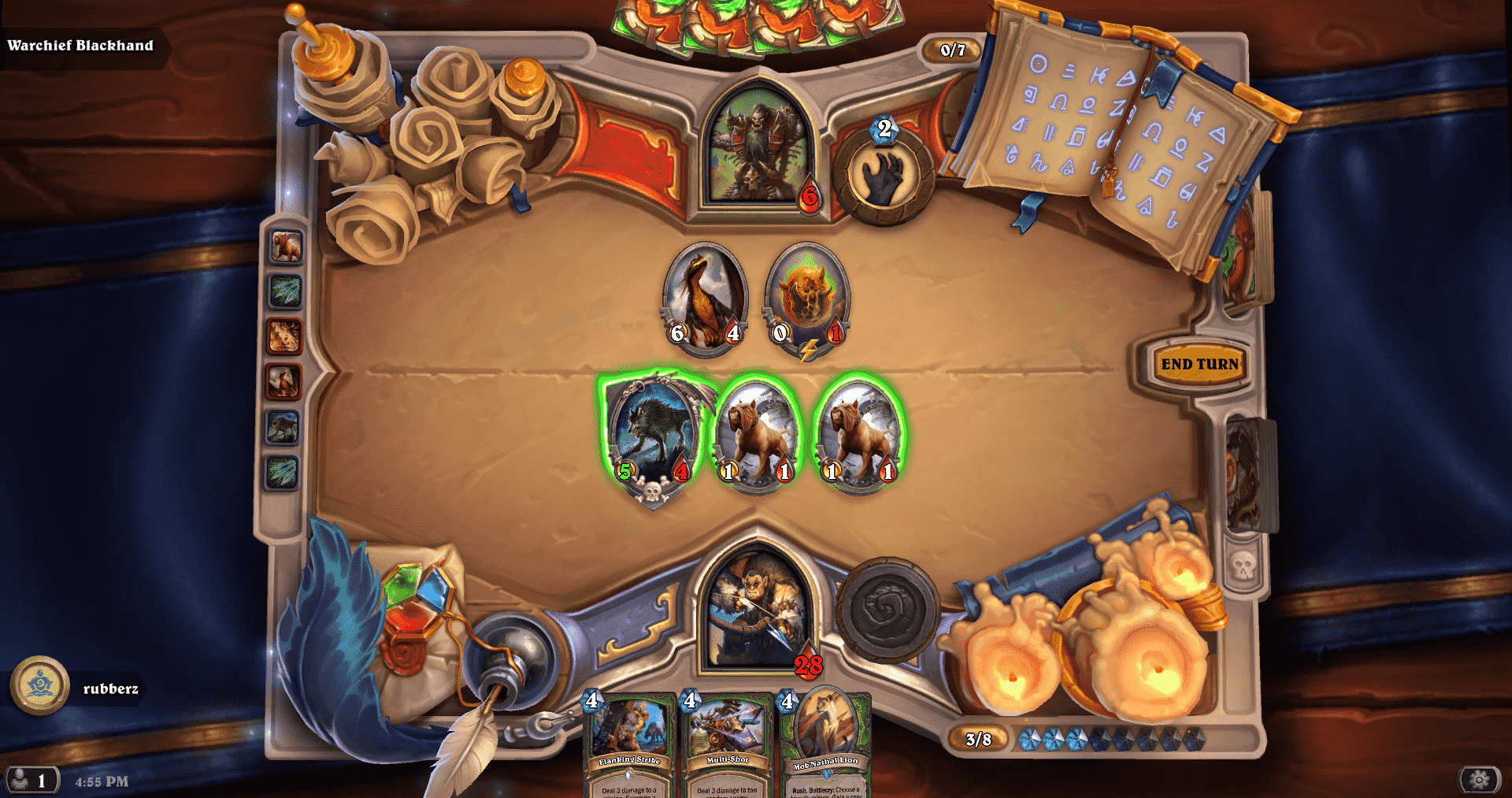 “Uniting the orc clans into the Horde, he has secured dominance over the land.”

After being banished from his home by his father Leoroxx, Rexxar seeks an audience with the Warchief of the Horde to persuade him to spare his people in the Mok’nathal Clan.

This is another straightforward fight where you’ll want to chip away as much health away from Blackhand with your Hero Power before going for lethal. 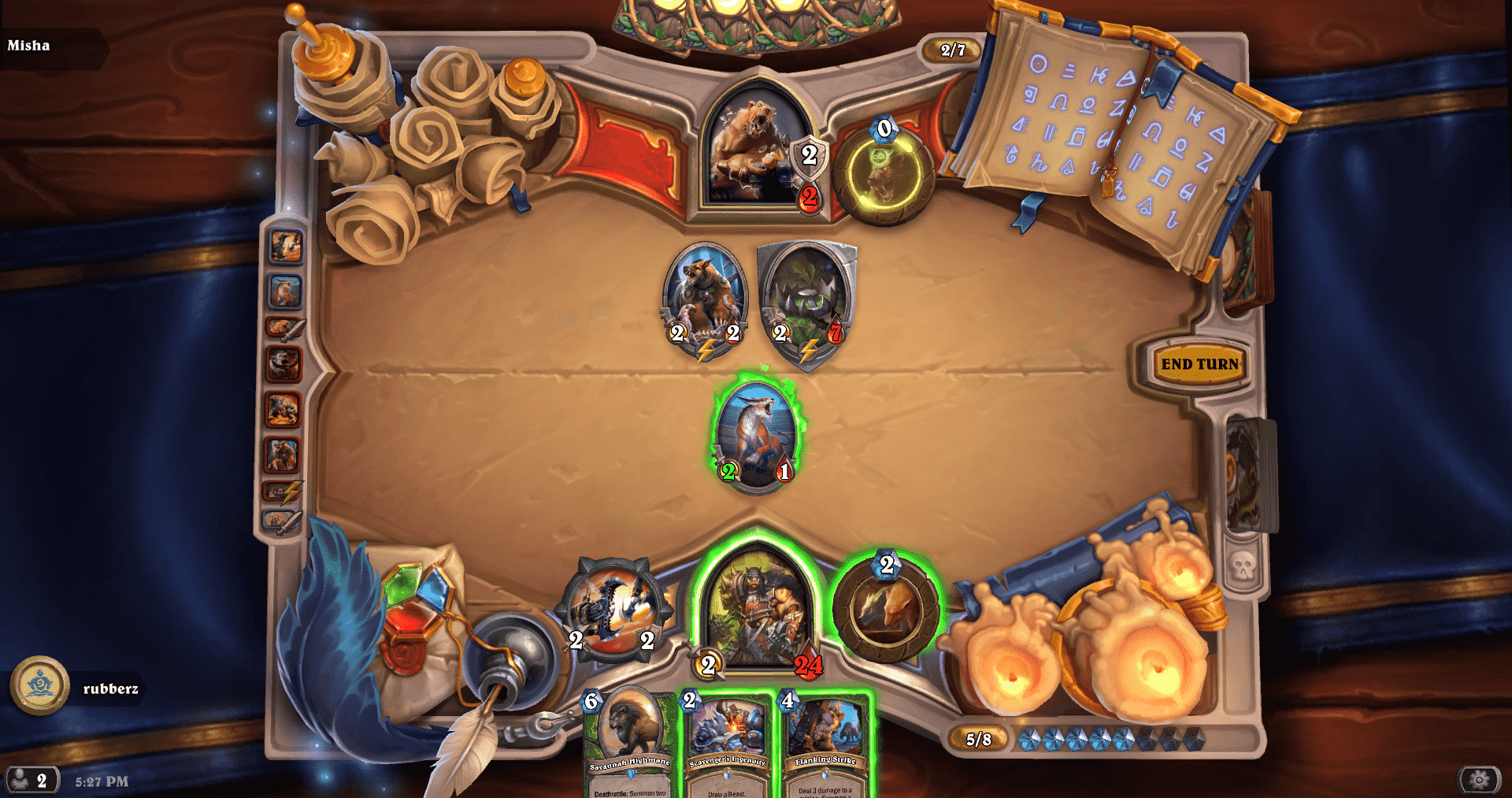 “Winning the trust of a bear isn’t easy. You need patience. And snacks.”

Misha’s starts the match with a 2/40 Vicious Bear Trap on her side of the field. The objective is to destroy the Vicious Bear Trap; once you’ve done that, the challenge is over. The problem however, lies with the Bear Trap, which deals 4 damage to Misha every turn. Misha has 30 HP, so by Turn 6, if she hasn’t used any of her Armor-boosting cards, such as Barkskin, Ferocious Howl or Claw, she’ll be in lethal territory.

You’ll want to destroy the Trap as quickly as possible, focusing all your damage on it and ignoring everything else; however, keep in mind that Misha’s Hero Power can also damage the Vicious Bear Trap as well if it’s the only minion or one of two minions on the board, so don’t minion stack your side of the field unnecessarily. 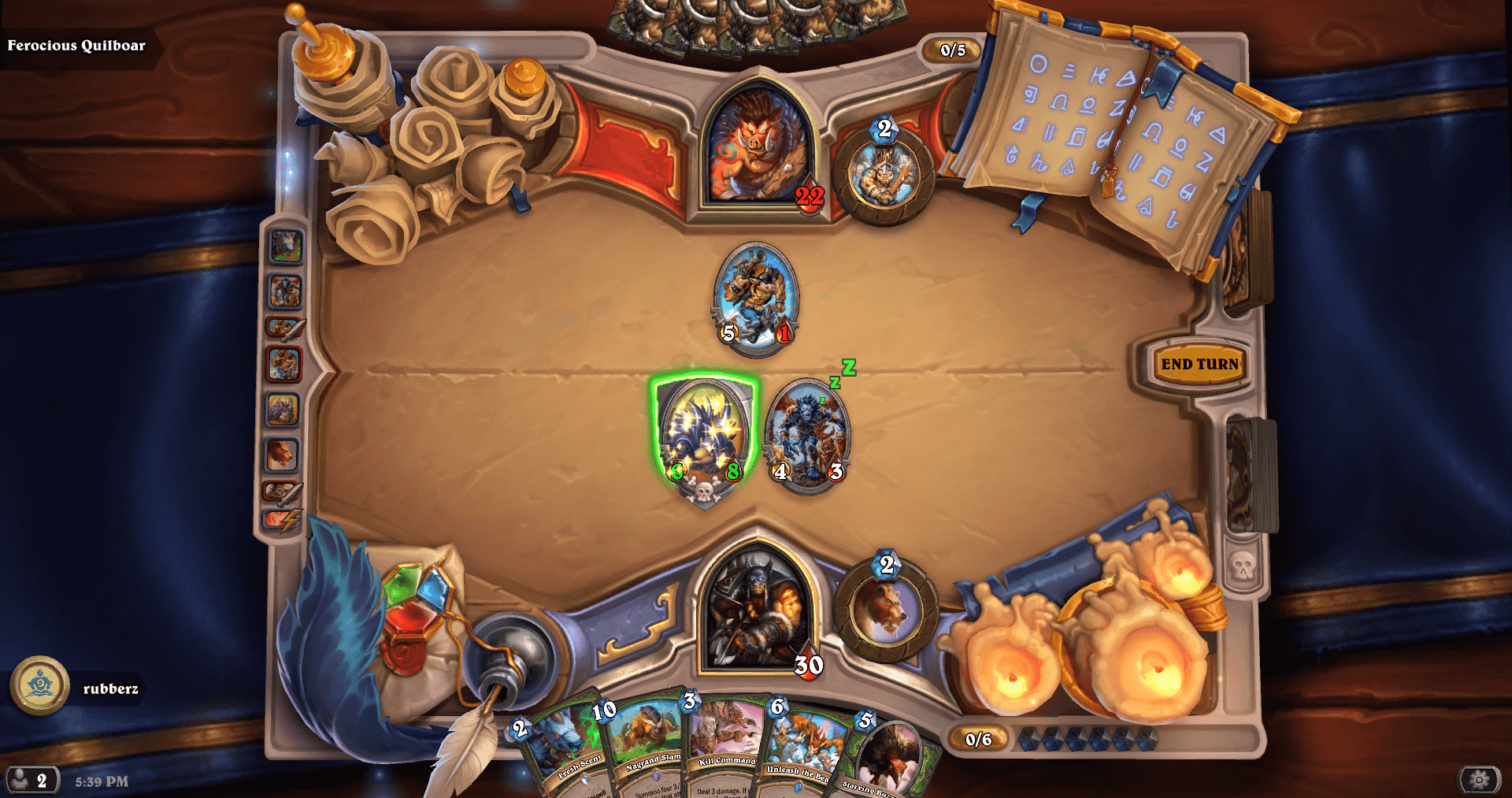 “These beasts are creating a disturbance. It’d be best to investigate.”

This encounter sees Rexxar come to the aid of Mogrin, an orc grunt entrusted with delivering an important message to Thrall in Orgrimmar during the events of Warcraft III.

After rescuing Misha from a bear trap in the last encounter, Rexxar’s Hero Power for this fight becomes the 2-mana-cost Call Misha, which summons the 4/4 Misha minion with Taunt; if Misha is already present on the field, the Hero Power instead restores 1 health to her.

To win this battle handily you should use your Hero Power nearly every turn possible in this encounter and either buff Misha with Fresh Scent or use her as a decoy to establish board presence with your other Beast minions. 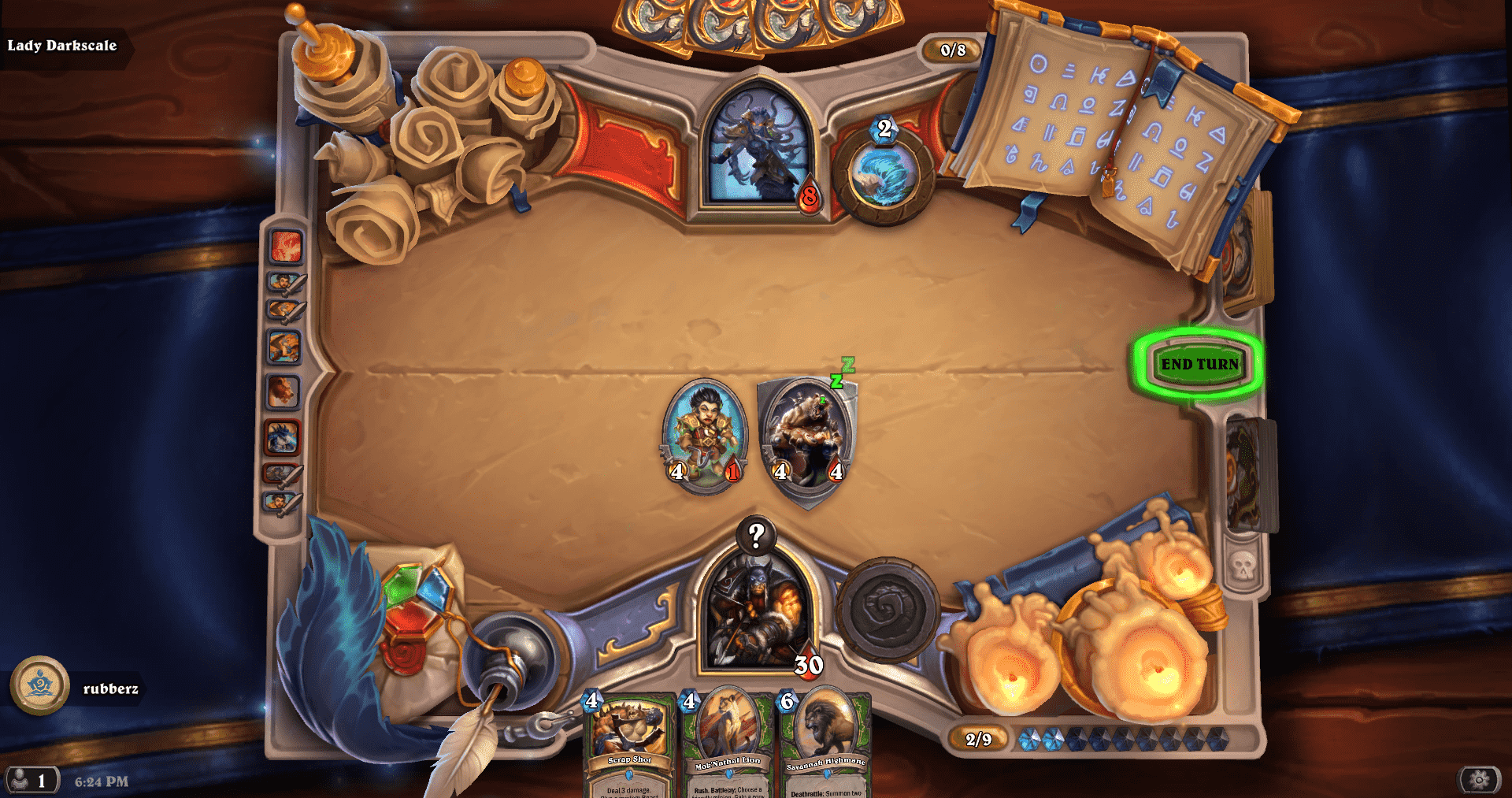 Lady Darkscale’s Hero Power: (2) Tornado: Deal 4 damage to a minion. Any excess damage continues to the left or the right.

The fifth encounter in the Rexxar Book of Heroes adventure is another reenactment of a Warcraft III battle; this time it’s Lady Darkscale, a naga sea witch who Rexxar faced down with Jaina Proudmoore and Chen Stormstout. 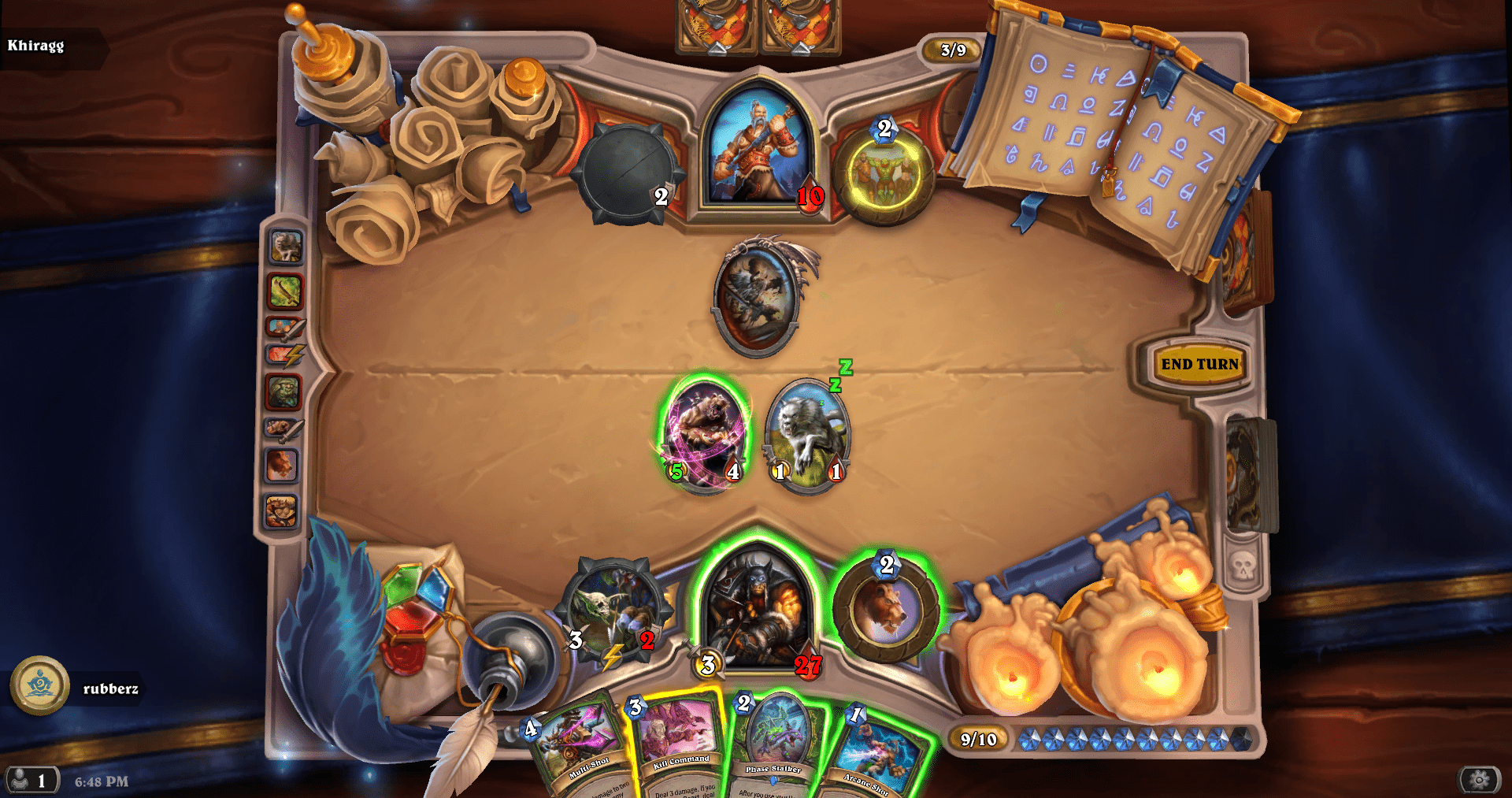 Khiragg’s Hero Power: (2) Kidnap: Put an enemy minion into a sack. (Except Misha.)

This encounter sees Rexxar saving Baine Bloodhoof from the clutches of a corrupt centaur named Khiragg. Khiragg’s Hero Power, Kidnap, is ironically identical to the one first seen with the Gnomenapper, a Tauren boss from the Witchwood solo adventure, Monster Hunt. 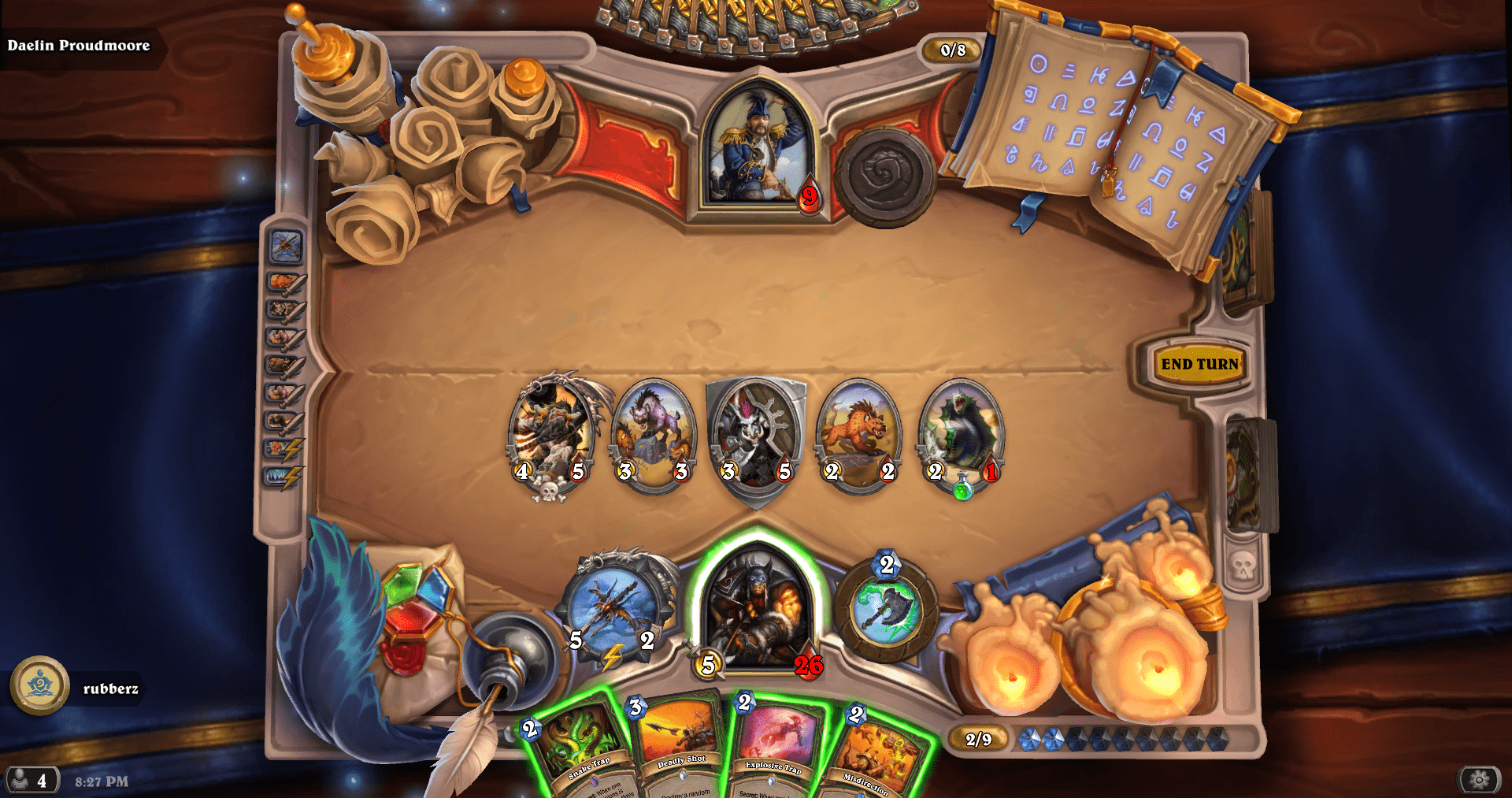 Kul Tiran Warship is a 2/6 Taunt minion which has the following card effect: At the start of your turn, summon 2 random minions from your deck.

Arguably the most difficult encounter in the Rexxar Book of Heroes adventure is the seventh challenge against Daelin Proudmoore, Lord Admiral and Ruler of the Kul Tiras — and also Jaina Proudmoore’s father.

Despite Jaina fighting alongside Rexxar (and in previous Challenges in the Rexxar Book of Heroes adventure), Daelin Proudmoore’s opinion on the Horde as unrepentant barbarians cannot be swayed. 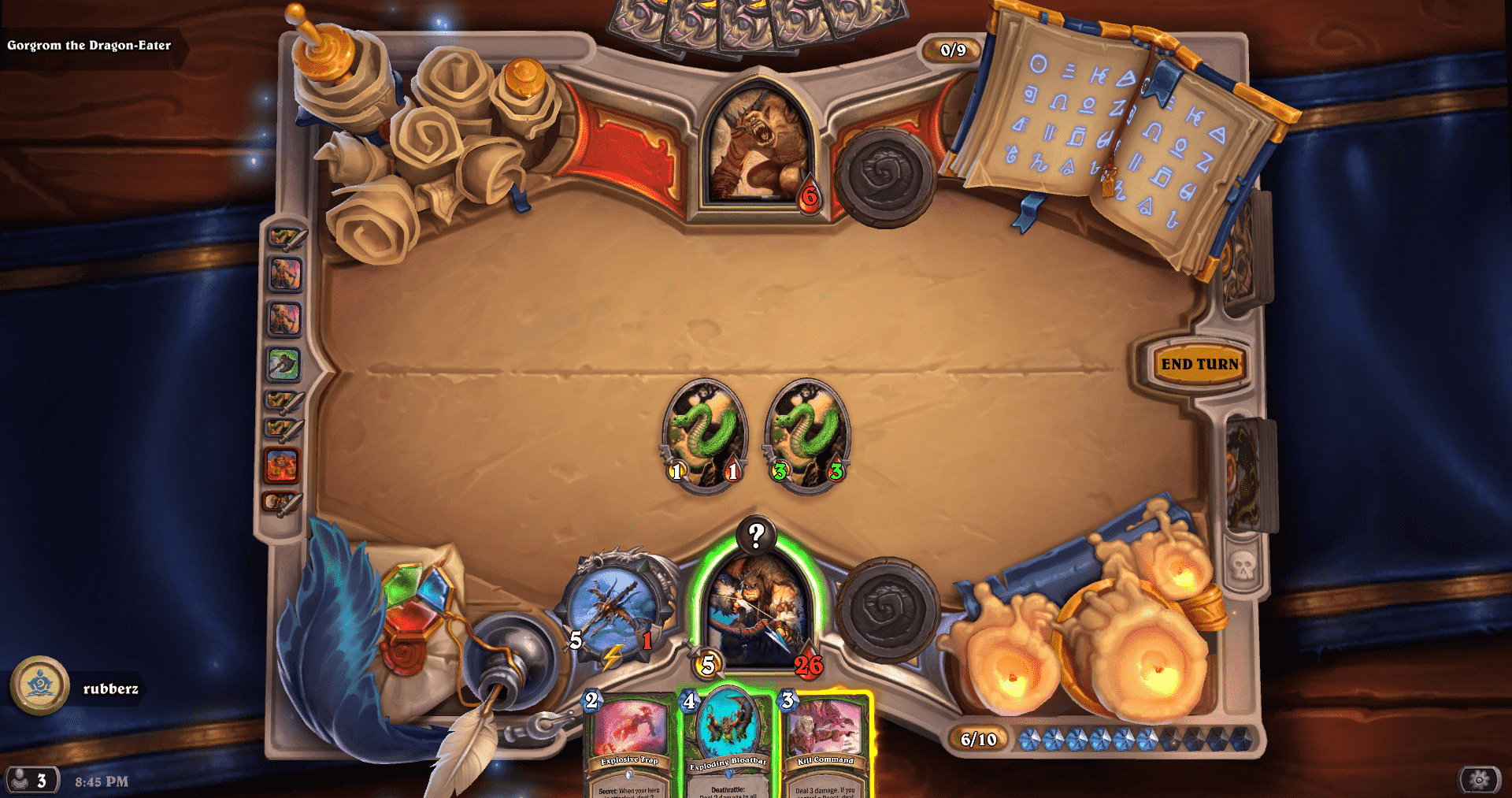 Gorgrom’s Hero Power: (2) Monstrous Growth: Gain 2 Armor. If you have less than 5 Armor, gain 3 Armor instead.

The final boss encounter sees Rexxar squaring off against Gorgrom the Dragon-Eater, one of the infamous Gruul the Dragonkiller’s sons.

This fight will require some strategic positioning of minions and judicious use of your special minion Spirit, but other than that it’s not too difficult a battle.

Did our Rexxar Book of Heroes guide/walkthrough help you clear the latest installment of Hearthstone‘s solo adventure? Do you have any questions on a specific boss or challenge? Let us know in the comments.

In this article:book of heroes, Featured 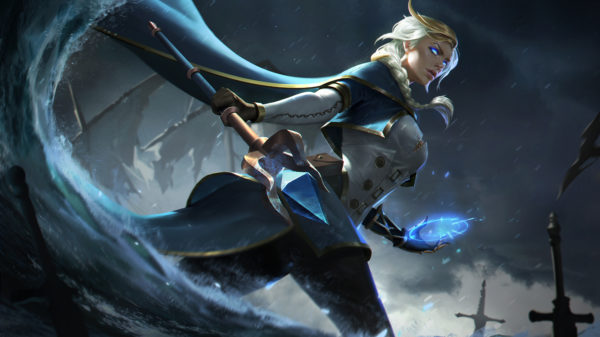 Heartstone fans might know Jaina Proudmoore as the default Mage Hero, but how much do you really know about the Daughter of the Sea,...