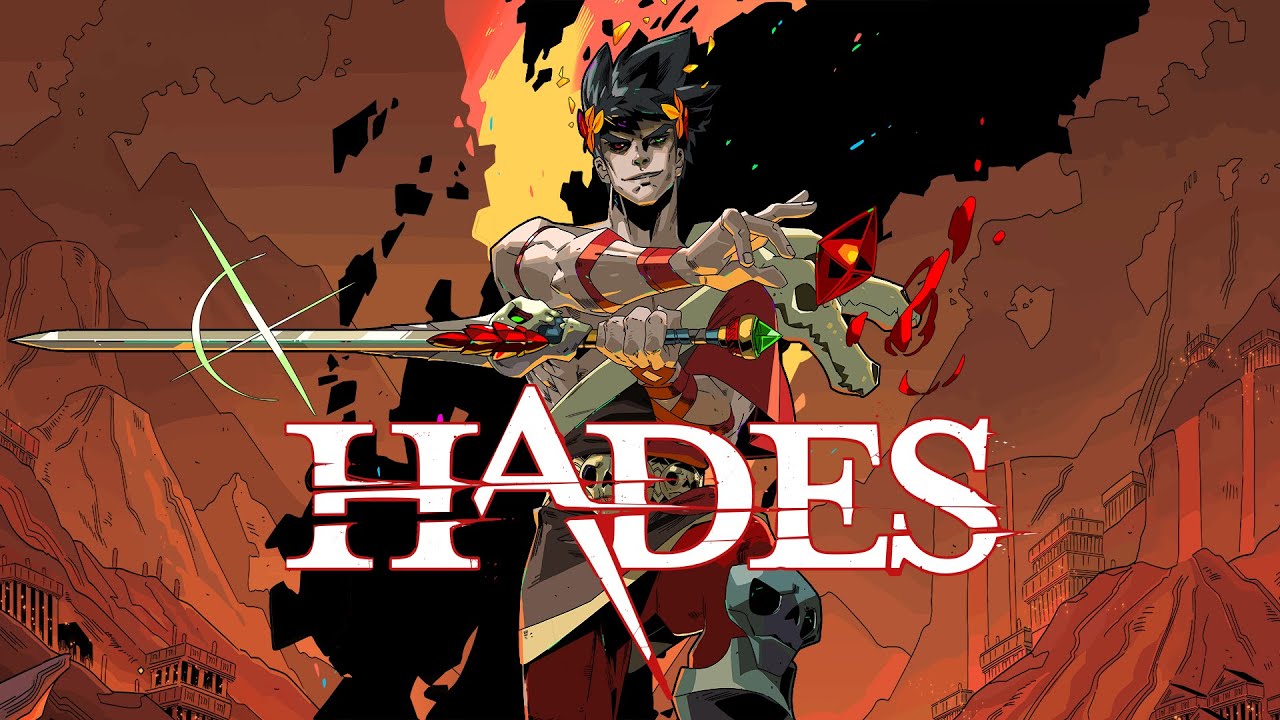 I have a Nintendo Switch, two eyes and haven’t crawled under any rocks lately so it seems like everywhere I turn someone is lavishing praise on Hades, the new roguelike dungeon crawler from Supergiant Games (creators of Bastion and Transistor).

On the one hand, it’s impossible not to be a little intrigued by all the noise Hades has conjured up. I’ve put a considerable amount of hours into roguelikes like Slay the Spire and Dead Cells, so to hear that Hades was on the level of, if not better (the game has a 10/10 rating on Steam, and a 92 average on Metacritic) than such top-tier offerings was as auspicious as a blessing from the gods themselves. On the other hand, as past experiences have taught me, all that buildup can easily lead to disappointment.

Remarkably, Hades lives up to the godlike hype. It manages this Herculean task by imbuing the roguelike genre with an engaging narrative, indelible characters and enthralling gameplay more seamlessly than ever before. It’s a beautifully rendered, sufficiently challenging, narratively rich, hellaciously enjoyable experience — and the most fun I’ve ever had with a roguelike (or any video game for that matter) in ages. 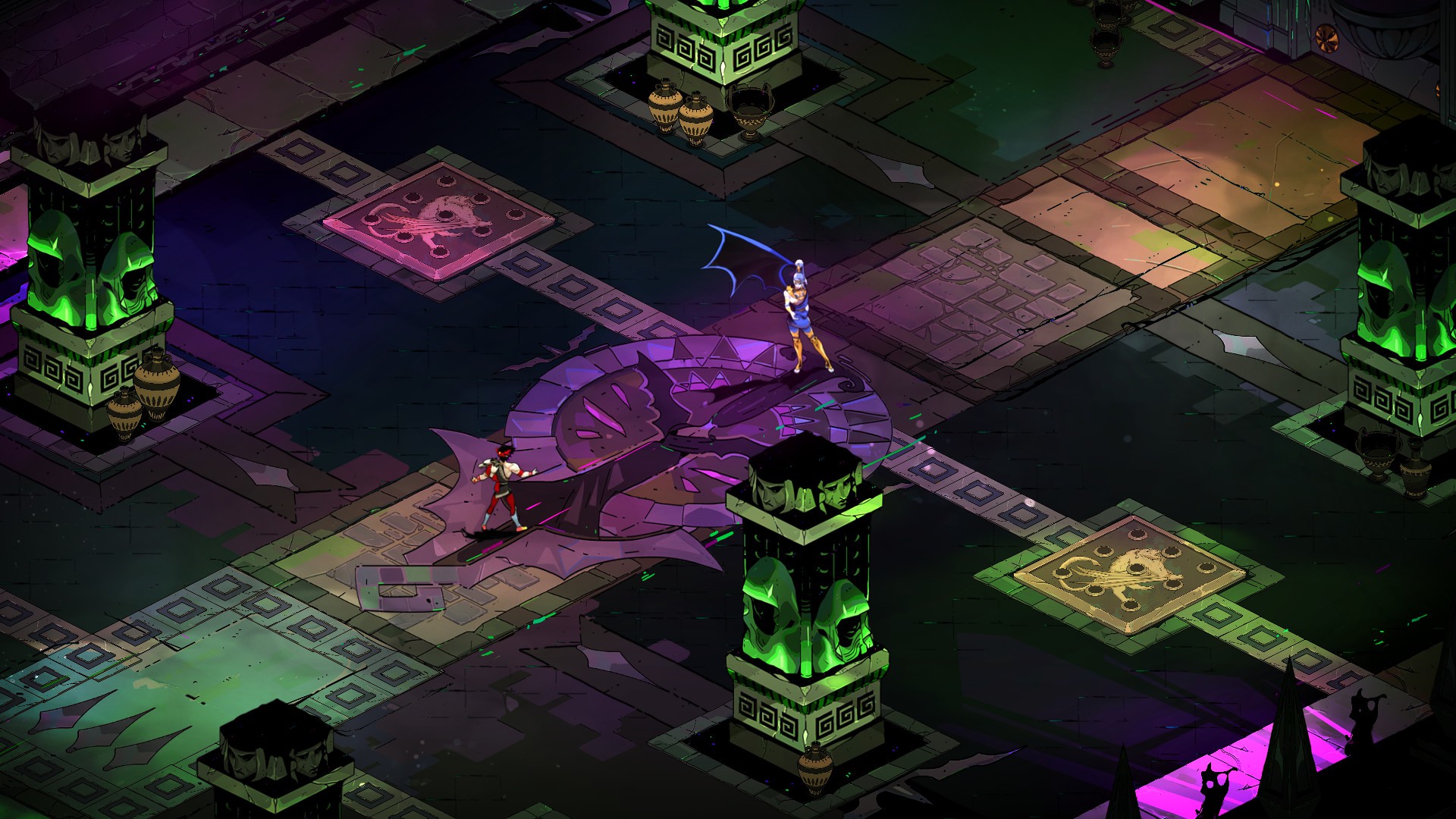 Zagreus takes on Megaera, one of the Three Fury sisters

Players take on the role of prince Zagreus, a sinewy, sarcastic young demigod with heterochromia (one red eye from his father Hades, and one green eye from his mother) and an overwhelming desire, like his ancestors did before him, to rebel against his father. More specifically, he wants to escape from the labyrinthine Underworld presided over by his father Hades and join his mother on Mount Olympus with the rest of the pantheon. (On the bright side, at least he’s not looking to start a war and overthrow his father like Zeus and his brothers did against the Titans, right? Or like Cronus and his fellow Titans did against Uranus?)

The Greek pantheon, as well as a multitude of demigods and other characters from the mythos, naturally plays an integral role in Hades and they’re brought to life in stunning fashion by Supergiant art director Jen Zee. Hades is as much an homage to Greek mythology as it is a modern day reinterpretation and it’s thanks to Zee’s sublime sense of character design that these centuries-old figures are immediately recognizable yet distinctive, visually unique and dripping with just enough modern day swag to set them apart from any other rendition of them we’ve seen before.

From major gods like the mighty, glorious bearded god of sky and thunder himself, Zeus, to the sensuous, pink-haired god of love and beauty Aphrodite to ancillary characters like the Charon, the boatman of the River Styx to Sisyphus, a figure famous in Greek mythology for bearing the punishment of rolling a boulder up a hill in Hades for all of eternity (only for it to perpetually fall back down to the bottom) — the lore is well represented. Just look at the character designs for the aforementioned Charon, with his wide-brimmed hat and skeletal face enshrouded in shadow and puffs of purple smoke; or Artemis, goddess of the hunt and wilderness, stooped as if in mid-pursuit of her latest quarry, bowshaft ornamented with forest birds and her earthy green-brown vestments comprised of branches, bone and animal furs, two of my personal favorite designs in the game and it’s not difficult to see what’s so impressive and absorptive about Hades‘s aesthetic. 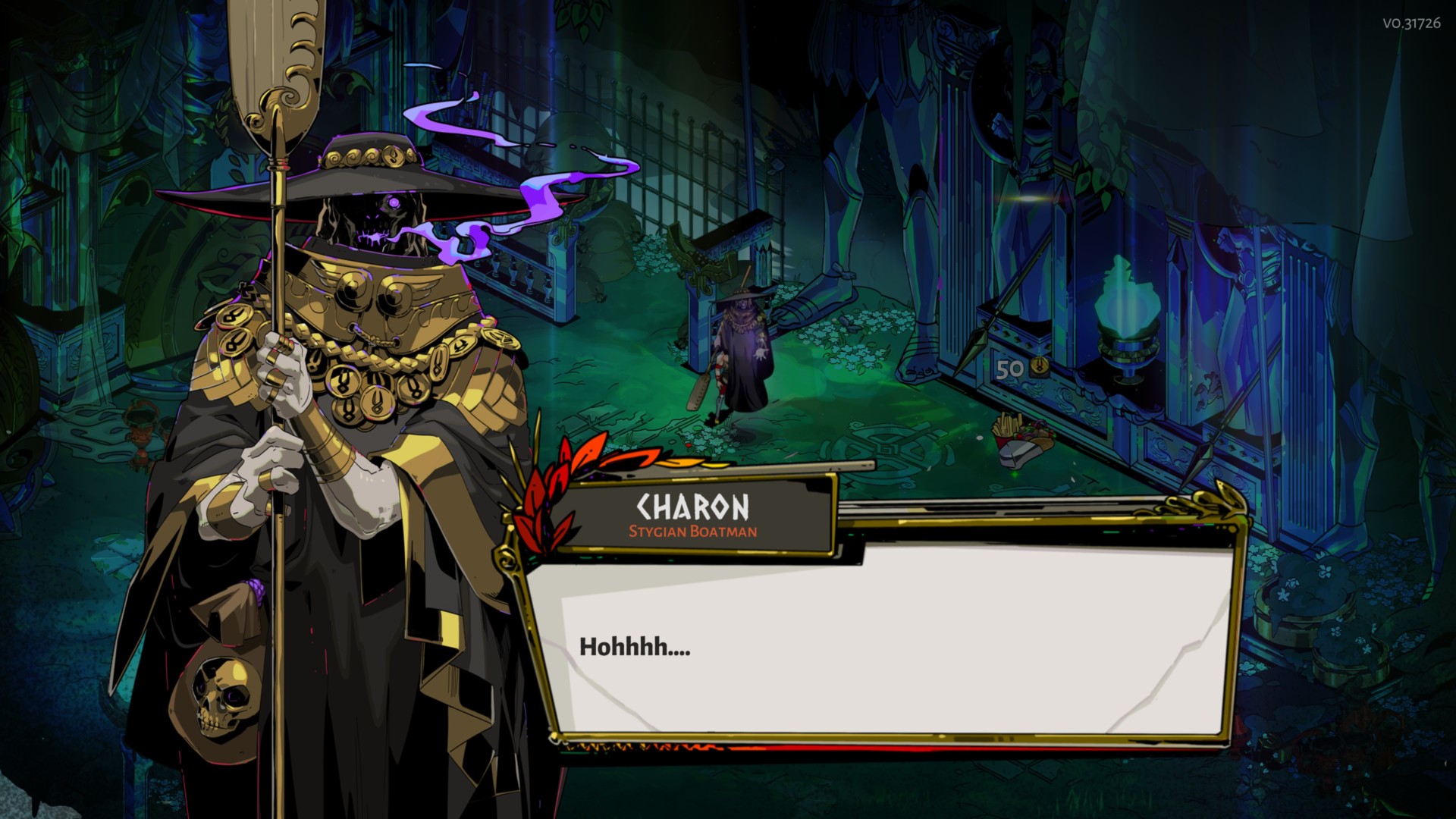 Charon, just one of the impeccable character designs by Jen Zee

The characters aren’t just for decoration either; there are over 10,000 unique voice lines in the game, all of which correspond with impressive consistency to the circumstances and encounters in which Zagreus finds himself; get squashed by a Wretched Lout and upon respawning from a crimson pool of dead souls (The Pool of Styx) in the house of Hades, the starting area of the game, (something you’ll do many, many times over) Hypnos, the embodiment of sleep will make a sardonic remark along the lines of “You got killed by a Wretched Lout? They’re really slow, have you tried dodging them?” Defeat a boss and you might find her later on in the House’s lounge area, explaining what an embarrassment it was losing to you. Or you’ll find NPCs that were once at the entryway to Tartarus mysteriously gone, with the only way to rediscover them found through a dialogue thread with another character. The world of Hades appears living and breathing, metamorphosing in much the same way Zagreus’ narrative does. It’s nuances like this, along with some of the permanent buffs that can be gained through the game’s currency, which set Hades apart from other roguelites and make the act of dying and reawakening in a place full of familiar faces far less frustrating than you’d imagine. Instead of wanting to throw the controller down in vexation after death, you’ll find yourself saying, “One more run.” And then all of a sudden you look on your Switch clock and it’s 3AM.

RELATED:  Pokemon Sword and Shield: How to find and catch Galarian Zapdos, Articuno and Moltres in Crown Tundra

The gods also gift Zagreus with different boons to aid him on his quest, each one corresponding to the god’s respective dominion; for instance, Zeus’ boons add to Zagreus’ weapons a powerful chain lightning effect which crackles between multiple foes; Aphrodite’s boons offer Zag increased survivability through her signature status effect, Weak, which decreases the damage weakened foes deal by 30%; Hermes gives boons that increase mobility and attack speed. And so on. The boons system, along with the game’s tight, responsive controls are extremely equitable; never do you feel as if the choice of boons pigeonholed you into a certain playstyle nor will you feel like the cause of Zagreus’ death was anyone’s fault with your own, no matter how treacherous some encounters become. 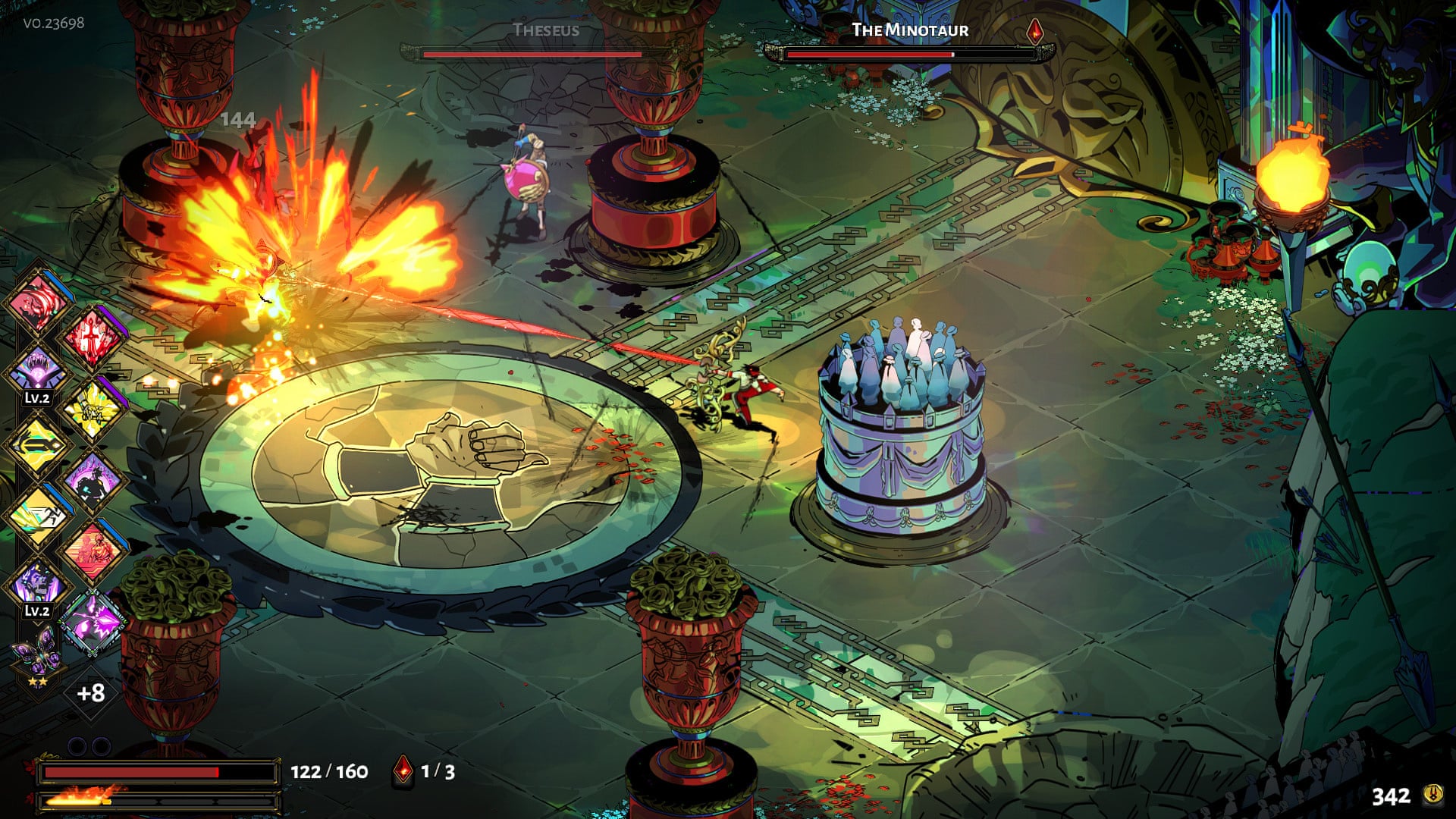 No matter how intense the battles become, the combat system remains tight, responsive and equitable

These encounters, although repetitive, never become tedious. The level maps are randomly generated, ensuring no two encounters are exactly alike and the playstyle of Zagreus’ combat loop can be drastically altered through use of different weapons. Zagreus starts out with a standard-fare dungeon crawler sword which he uses to slash apart his foes, but through the game’s permanent currency can unlock a greatshield which can be used to deflect and bash; a spear which can be thrown and telepathically retrieved; even the ancient Greek equivalent of a grenade launcher.

Even the music in Hades slaps. The soundtrack by Supergiant mainstay Darren Korb is like something out of a lost Mastodon album, with sludgy, astral riffs intensifying into thundering breakdowns whenever a chamber encounter becomes particularly difficult and/or during boss fights. The Hades soundtrack is actually available on Amazon Prime, and well worth a look.

All in all, Hades is a masterwork in roguelites and video games in general, irrespective of genre. It’s teeming with spirited characterization, meticulous worldbuilding, an awe-inspiring modern day interpretation of classical myth aesthetic and crisp, addictive gameplay. It’s also one of the few games which lives up to all the hype, so if you’re one of those individuals who becomes rightfully wary when a game gets lauded to no end, don’t be afraid to dive into Hades. Now if you’ll excuse me, I’ll see you in Hell.

Nintendo Switch: Hades review
Final Thoughts
All in all, Hades is a masterwork in roguelites and video games in general, irrespective of genre. It’s teeming with spirited characterization, meticulous worldbuilding, an awe-inspiring modern day interpretation of classical myth aesthetic and crisp, addictive gameplay.
Pros
Crisp, responsive controls and an equitable combat system
Masterful characterization and meticulous worldbuilding, especially for a roguelite
The visuals are a sexy, amazing reimagining of classic Greek myth and the soundtrack is equally superb
Cons
If you're not accustomed to roguelites, you might be taken back by how many times you'll have to die and start over -- but even that aspect is alleviated through Hades' currency system and a world that seems connected to your every action
9.5
Excellent
In this article:Featured, hades, supergiant 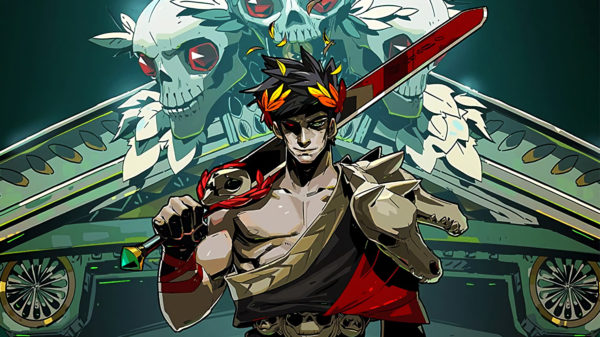 Hades tops the list of best-reviewed Steam games of 2020

Developer Supergiant’s Hades wasn’t only a game released this past year that was universally loved among critics (check out our very own Hades review...