Legends of Runeterra, the free-to-play digital collectible card game from League of Legends creators Riot Games has finally come to the end of its open beta phase and will enter official launch mode with the onset of its brand-new Rising Tides set.

Check out the full press release from the official Legends of Runeterra website:

LoR is officially launching with Patch 1.0, featuring the new Rising Tides set, iOS and Android support, all kinds of new progression and personalization, and a whole lot more.

Thank You from the LoR team

Wow. The past few months have flown by, and we’d like to express a deep appreciation for everyone who has played Legends of Runeterra during Open Beta! We’ve learned so much from playing alongside you. With the help of your feedback and playtesting, we’ve iterated our card balance, progression systems, and even our performance settings to try to provide the best possible experience, and we know the game is better for it. Our goal is to continue our exploration of Runeterra, sweet outplays, and awesome Champion moments right there beside you for years to come. Thank you for your excitement and passion, we wouldn’t be here without you!

For everyone who is joining us for the official launch, welcome! You’re jumping in at the perfect moment, with full crossplay between your PC and Mobile accounts so Legends of Runeterra is available wherever you are, a progression system that’s rewarding however you want to play, and a ton of awesome cards to collect and play with. We can’t wait for you to start your journey, and we’re committed to making your experience as exciting and enjoyable as possible. We hope you dive in, and let us know what you’d like to see next!

– Jeff, Andrew, and the Legends of Runeterra development team

The Rising Tides expansion charts new territory with the addition of Bilgewater, the next region of Runeterra, as well as 11 new Champions and 120+ new cards! 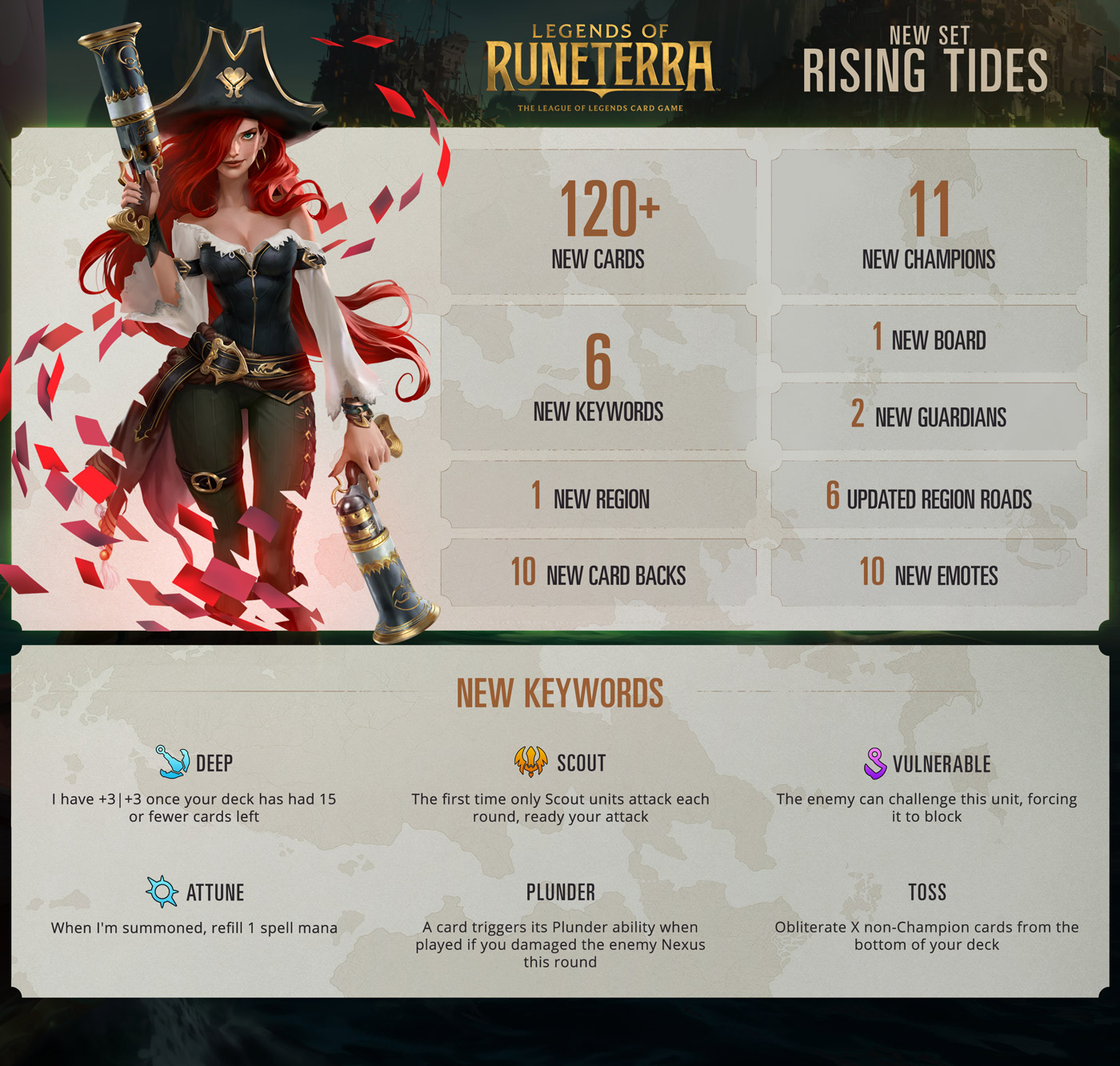 In the treacherous harbor of Bilgewater, locals live and die by one code: take whatever you can. Pirate gangs never pass up a chance to plunder, swindlers and rogues keep the next big score in their sights, and monsters of the deep devour entire ships without warning.Bilgewater joins LoR’s cast of regions for even more deckbuilding possibilities, and brings a slew of options to take enemies by surprise and shoot holes in their plans. You win by bombarding your opponent with attacks they just can’t deal with, and when it’s time to sink or swim, you’ll have all the firepower you need to pull it off.

Rising Tides features a full regional roster of five Champions and 60+ cards for Bilgewater, as well as new cards and a new Champion for all six existing regions. Attack from all new angles built around new keywords or mechanics, or see what kinds of new twists you can add to your favorite strategies—it’s all in the cards.

We’ve revealed a bunch of Rising Tides cards over the last few weeks, but not all of them. Starting today, you can head to one of the sites below and see the full catalog of new cards in Rising Tides!

Rising Tides comes to PC with Patch 1.0, which will go out at approximately 10 AM, April 28 PT.

NOTE: If you hold off on redeeming your weekly vault until you’re on Patch 1.0, it will be able to include cards from Rising Tides!

Right alongside Rising Tides, LoR is officially launching on iOS and Android!

Once we release Patch 1.0 to PC tomorrow (~10 AM, April 28 PT), we’ll distribute the mobile client to the Play Store and App Store. Depending on where you live, it may take anywhere from 4 to 48 hours past that time for you to see the app in your store.

On April 30, mobile should be fully live in all launch regions and LoR will officially be launched!

Note: LoR will not be launching in China or Vietnam at this time.

While a Riot account will not be required to access LoR on mobile, we strongly encourage you to use your existing Riot account (or create one), as a Riot account is required for cross-platform play and sharing your account progress between PC and mobile. (We also can’t help you out with account recoveries if it’s not a Riot account.)

As a special thank you to beta players and everyone who joins us at launch, all accounts that log in to LoR by 11:59 PM, May 7 PT will receive an exclusive Moonstruck Poro Guardian.

The next day, we’ll begin distributing the reward, and you should see it in your collection within 24 hours. If you still don’t see your guardian after 48 hours, please contact Player Support. Don’t worry, your poro pal will wait for you.

To help get new folks started in LoR, we’ve added a one-time per account track of first-week login rewards. All existing accounts as of Patch 1.0 will get to run through the track—enjoy!

Bilgewater joins the regions of Runeterra with its own Region Road, and all Region Roads are now extended so you can pursue all the new cards (and regional card backs!) in Rising Tides. New and returning players (or those who just like to take their time) can now earn extra XP for early levels in the original regions. 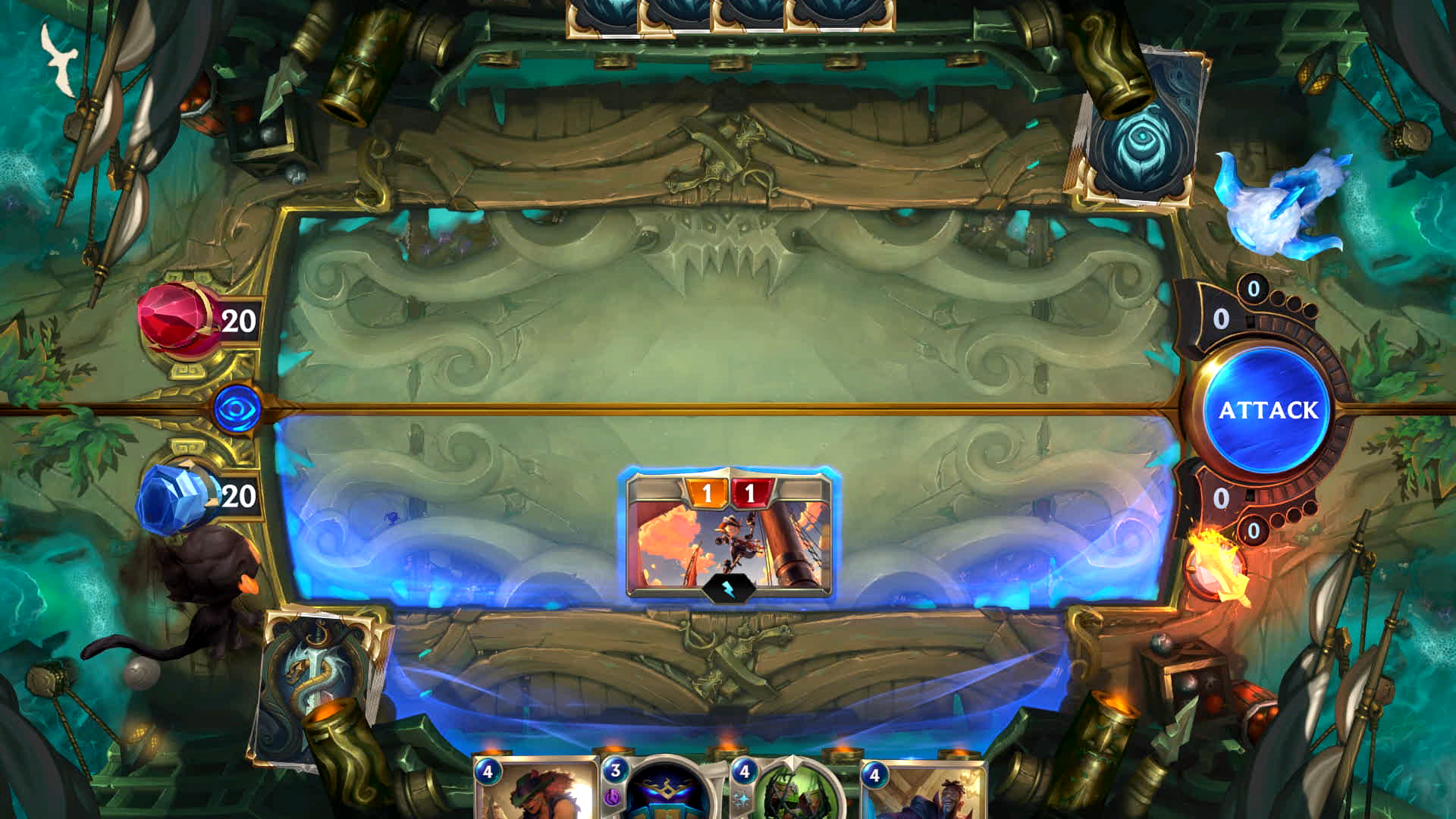 For legends who take bold risks for big rewards. 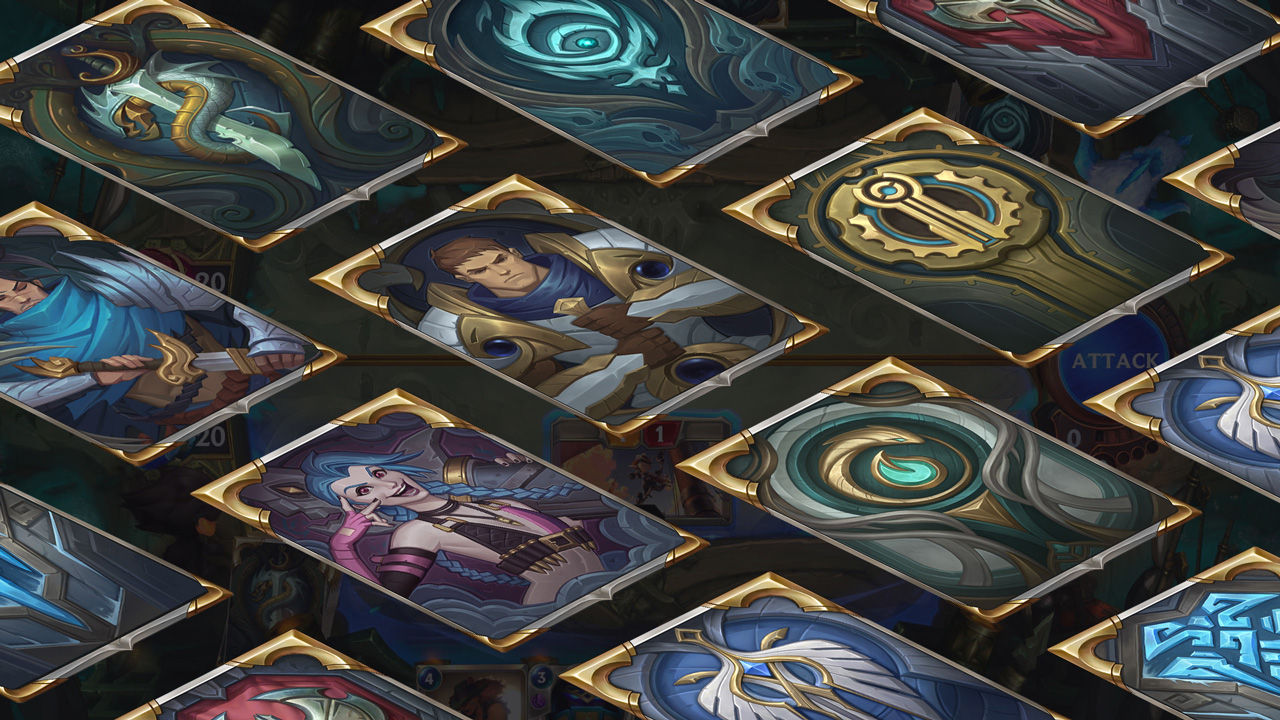 To go along with all the new options, we’ve added the ability to customize and save individual deck loadouts for boards, guardians, emotes, and card backs. Whether you want to make sure your favorite guardian is always along for the ride or accompany your strategy with the perfect theme, you can now set up every deck just right.

Launch also brings the end of the Beta Season and the start of LoR’s first post-launch ranked season—the Season of Plunder. Beta participants will earn a Beta Season-exclusive icon based on the highest tier they reached. Beta ranks will be partially reset for the new season, then you’ll have about two months to climb as high as you can before the Season of Plunder ends and the next Ranked reward is granted (reward details coming soon).

We made this change so that longer games will retain more interesting decisions even late into the game when boards are filling up. We want you to be able to keep playing the sweet units you draw, if you want to, and until this patch, you were essentially locked out if you had a full board of 6 units—you couldn’t play any more from your hand. Now, you can replace one of your units on a full board with the new one played from hand—choose the one you want to replace and it gets Obliterated.

We’ve got a ton of Expeditions updates for Rising Tides, with both eight new archetypes to draft and updates to all existing archetypes.

We’ve made a variety of adjustments to smooth out the new player experience, and added new challenges and AI decks for Rising Tides.

Are you excited for the official launch of Riot Games’ answer to Hearthstone? Legends of Runeterra Patch 1.0 will release at 10AM PST on April 28th and April 30th on iOS and Android platforms.

RELATED:  Nintendo to remaster popular Mario games on the Switch for series' 35th anniversary
In this article:Featured, legends of runeterra, riot