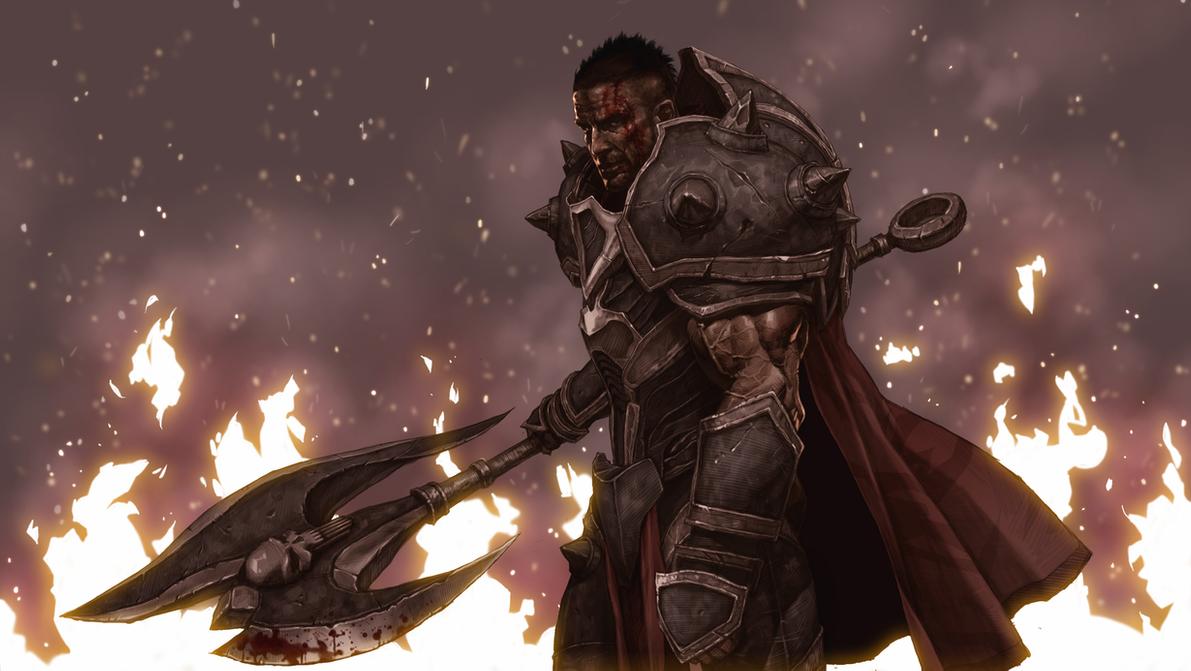 In the last card art analysis, we took a look at Scarmother Vrynna and the story behind her scars.

In today’s Legends of Runeterra card art examination article we are going to look at Darius’ art.

At first sight, nothing special to note, apart from the two dead soldiers on each side of Darius. They have a very Freljord vibe with their long beards and their horned helmets.

Now if we watch the Legends of Runeterra Darius Champion Showcase video from Riot’s YouTube channel and stop the video at around 0:06, we can actually see what’s in front of Darius at that moment. 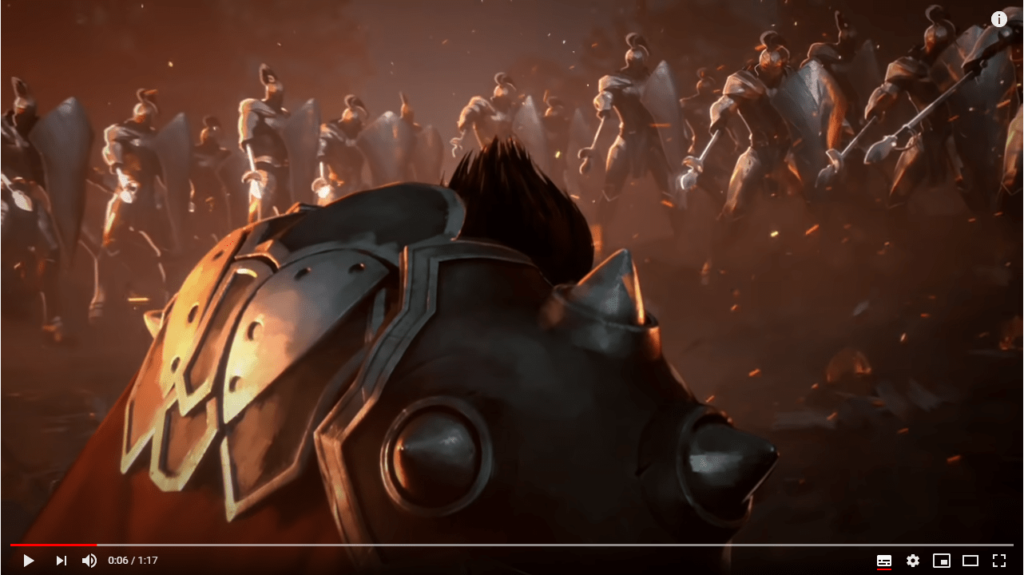 A lot of soldiers with shiny armor, spears, shields and something strange on their helmets, like a sort of crest, or a ponytail.

We’ve already seen a similar soldier in Legends of Runeterra. 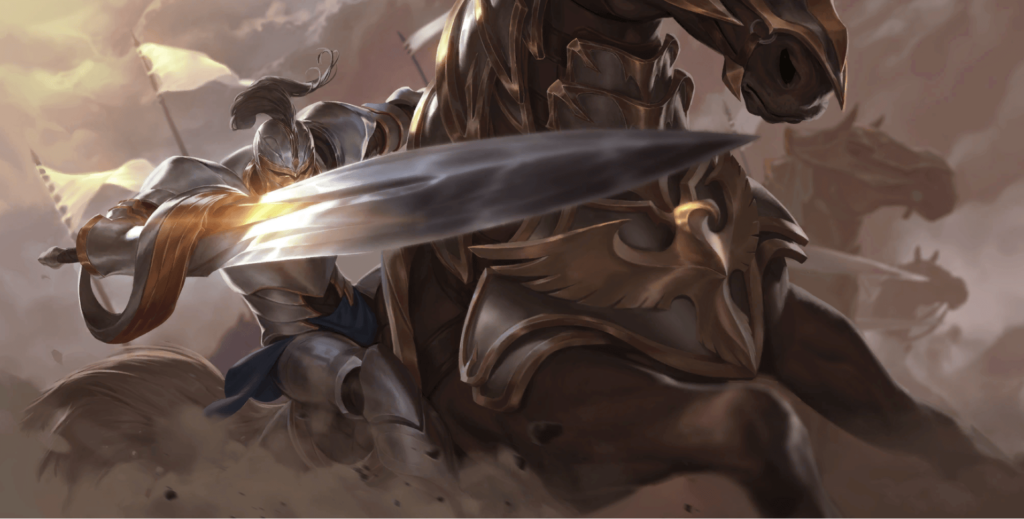 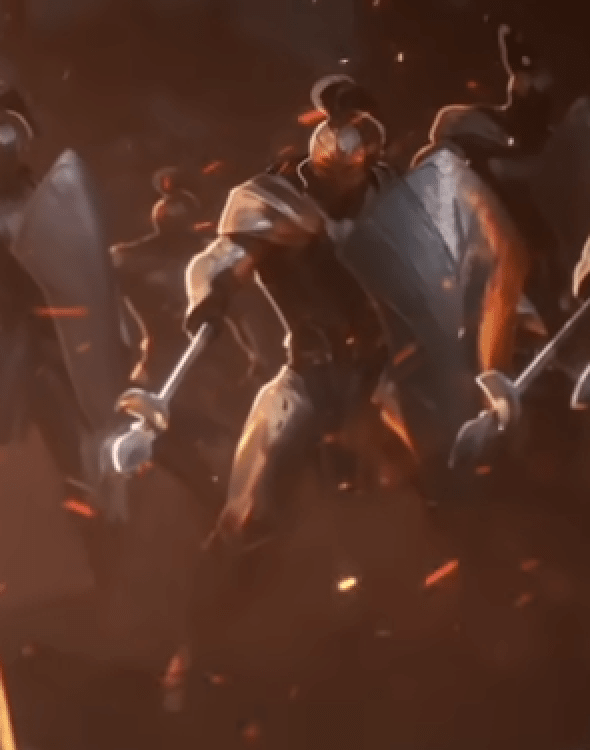 I think that we can safely assume that the soldiers surrounding Darius are therefore from Demacia. They may be Vanguard Cavaliers who just left their horses to capture Darius, or maybe they are another elite unit from the Vanguard, like the Vanguard Lancers maybe?

I personally think the helmet is a sign that they are from an elite unit, even among the Vanguard, which we already know is an elite unit of the Demacian army. Let me explain why I think that. I had a look at all the Demacian art containing Demacian soldiers on horses, namely Cithria of Cloudfield and Cithria the Bold. 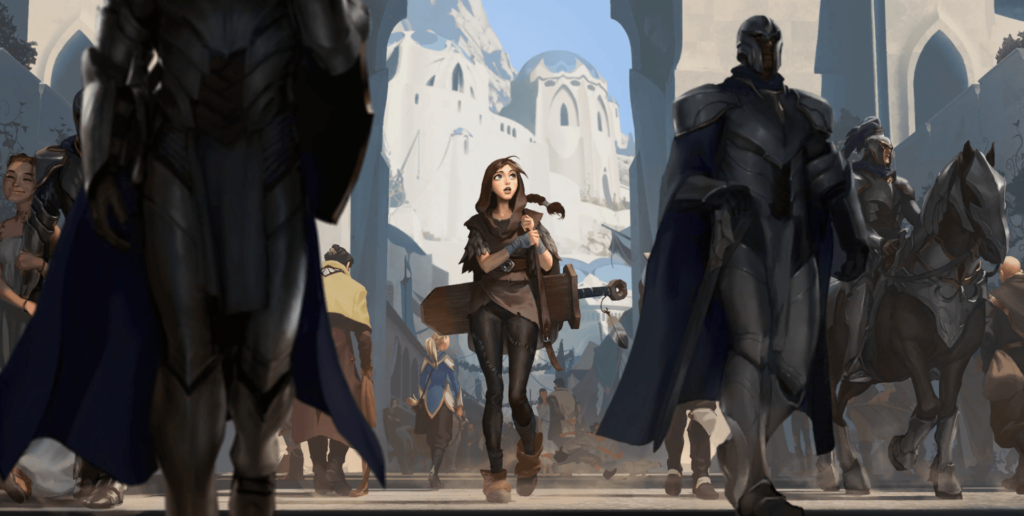 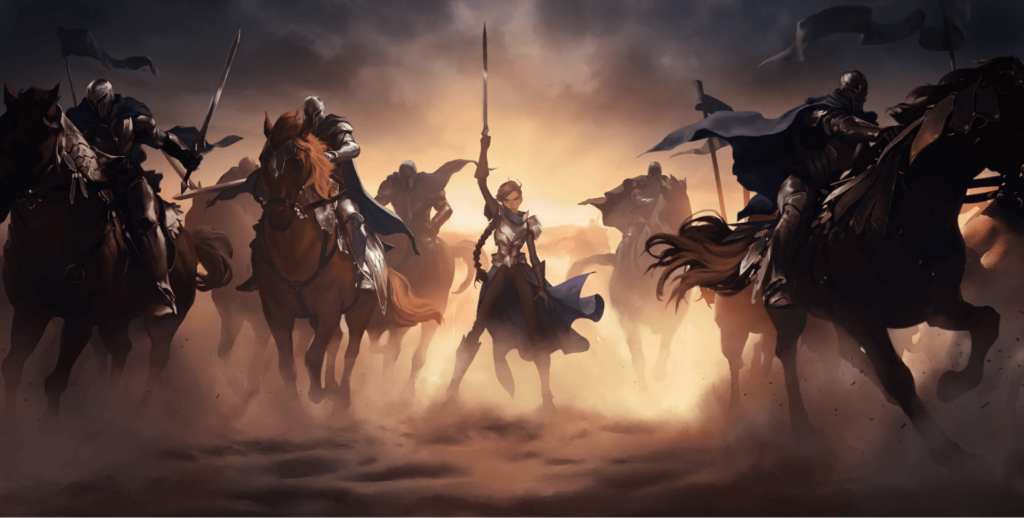 First, in the art of Cithria of Cloudfield, we can see a Demacian soldier on a horse. This soldier has a helmet sporting a sort of ponytail/plume on top, although it has a different shape (it looks less like hair and more like fur or feathers) and the rest of the helmet also has a different shape. The one constant is the armor of the horse is very similar to the one in the Vanguard Cavalry art. Maybe he’s an officer in the elite cavalry regiment? Or maybe it’s a helmet that they use when they are not in mission, as it appears to be more comfortable and less protective (more space to breathe, etc.)?

In the art of Cithria the Bold, we can see several soldiers on horses but none of them have the special helmet with the plume. None of the horses have heavy armor but we still know that they are in the Vanguard since we know that Cithria is in the Vanguard; that’s why I think that there may be two different regiments of Vanguard Cavalry — the normal one that we see in the art of Cithria the Bold and a more elite regiment with ponytailed helmets and armored horses (like in Vanguard Cavalry’s art). And that’s also why I think the soldiers surrounding Darius are not just from the Vanguard but from an elite regiment of the Vanguard.

In any case, going back to Darius, one thing is for sure: he’s surrounded by Demacian soldiers (who may or may not be from an elite unit of the Vanguard). This is weird because the two dead bodies beside him really don’t look like Demacians; they look more Freljordian with their long beard and their horned helmets.

Here’s my theory for that. There is a story called Turmoil which is about Cithria and a Vanguard squadron escorting a mage from the allied nation of Arbormark.

It is said that Arbormark is a nation which is between Demacia and the Freljord. The man from Arbormark is described as a “massive man clad in bearskin,” so we could assume that they are physically closer to the Freljordians than to the Demacians (bearskin is typically the kind of clothes the Freljordians would wear, the Demacians much less so). Perhaps the two Viking-looking warriors that are lying dead next to Darius are actually warriors from the Arbormark?

This would mean that Noxus may have attacked them to extend their empire (as they did numerous times), and since the Arbormark is an old allied nation of Demacia, the Demacians sent their troops to help them. That’s how we end up in the situation of the Darius showcase video. Another detail that might indicate that the dead warriors are not from Freljord is that there is absolutely no snow anywhere in the picture, so it is likely that this scene is taking place south of Freljord — which is exactly where Arbormark is located.

RELATED:  Legends of Runeterra: How Scarmother Vrynna got her scar

As always, share your thoughts and theories in the comments.

EDIT: I think the Legends of Runeterra: Launch Announcement and Trailer might confirm that the two spears are actually the same spear and that the soldiers in front of Darius might be in the Vanguard Cavalry. Look at the sequence between 2:27 and 2:31, it looks like the difference in the spears is just due to the angle you look at it! 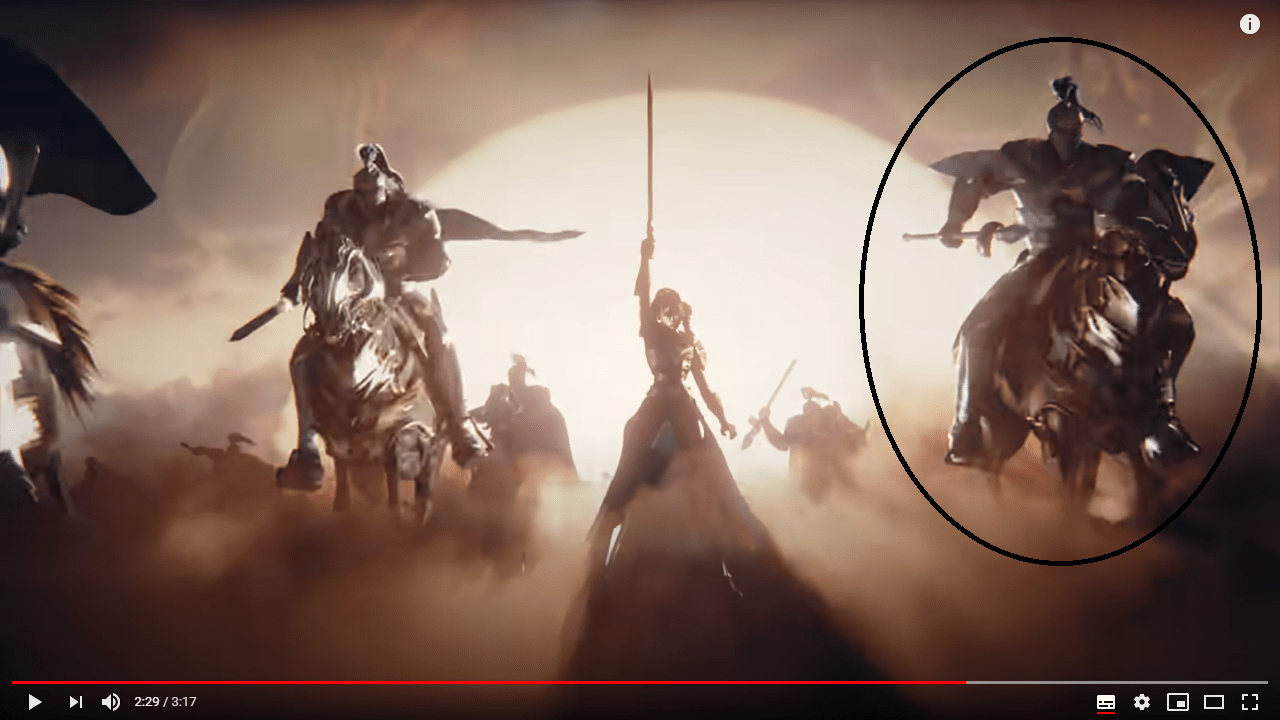 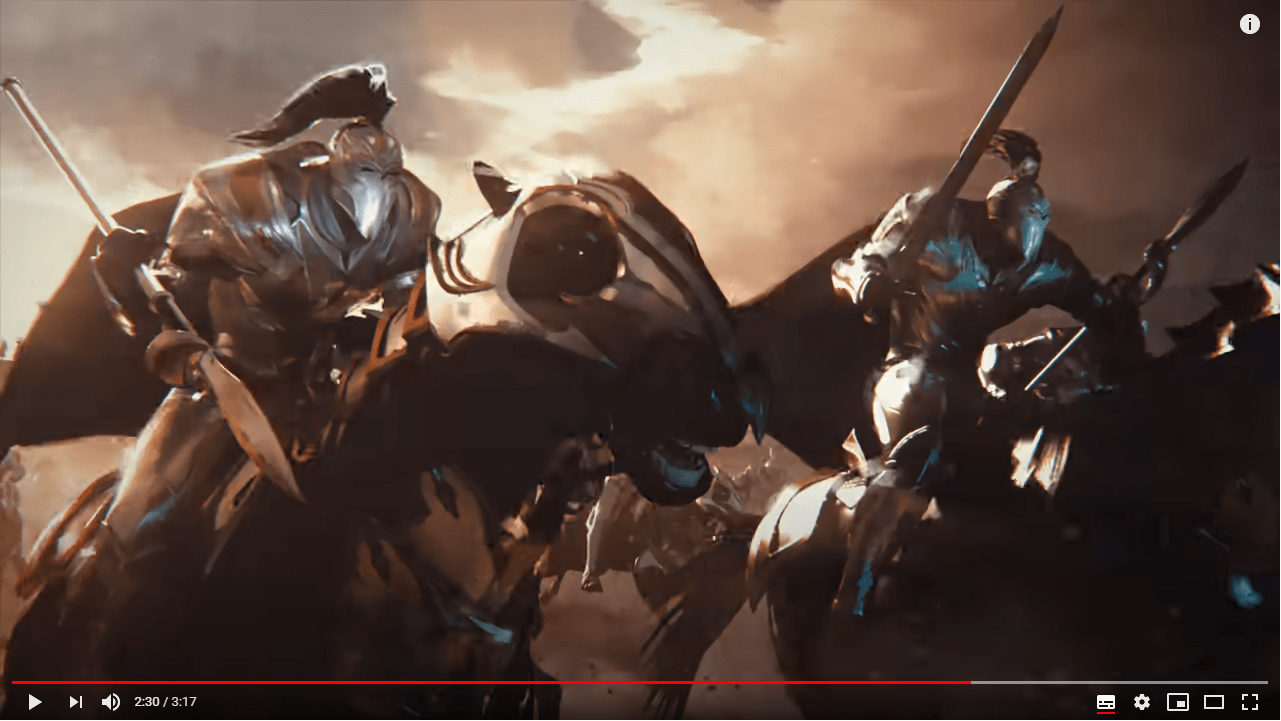 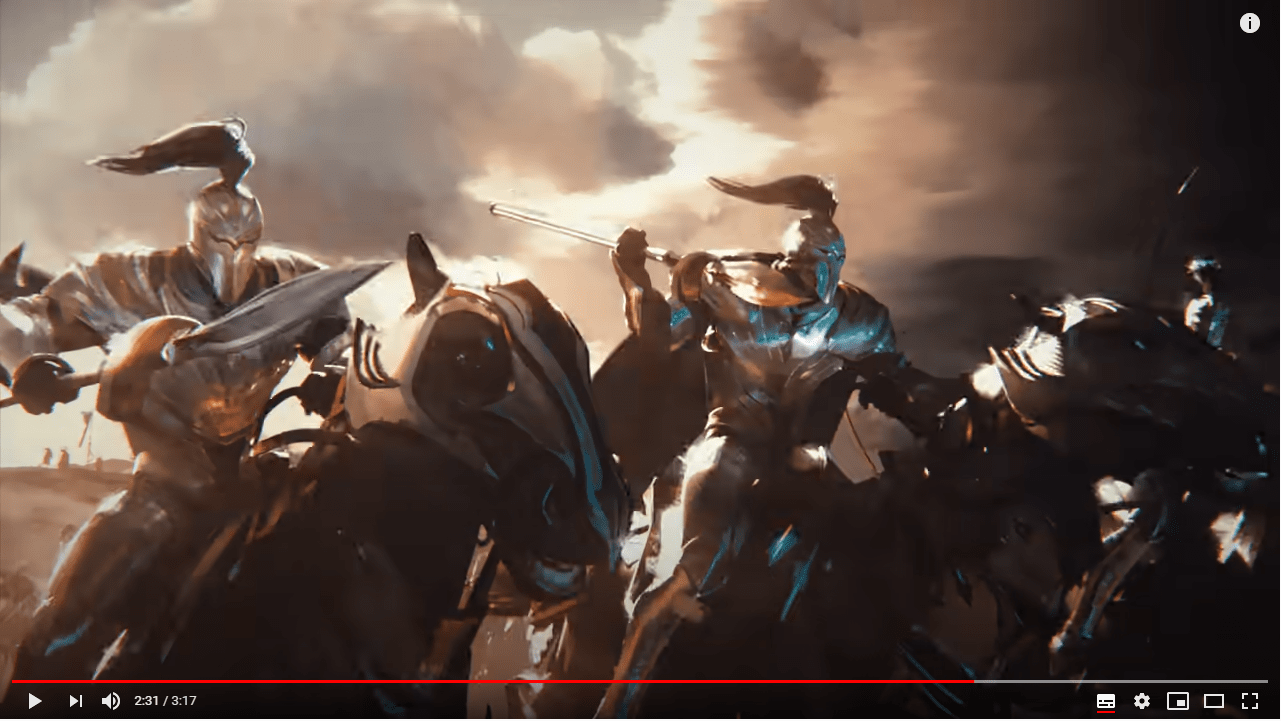 The last one is almost identical to the art in Vanguard Cavalry. Now the only interrogation about the soldiers in front of Darius is the shield, which does not appear in the launch trailer either. Maybe it is attached to the horse and they pick it up when they get down from the horse?

The other interesting thing to notice here is that Darius seems to be allied with the Vanguard Cavalry in the trailer. We know that the trailer is not canon obviously but the scene in Darius Showcase video could be a reference to the launch trailer! What do you think?