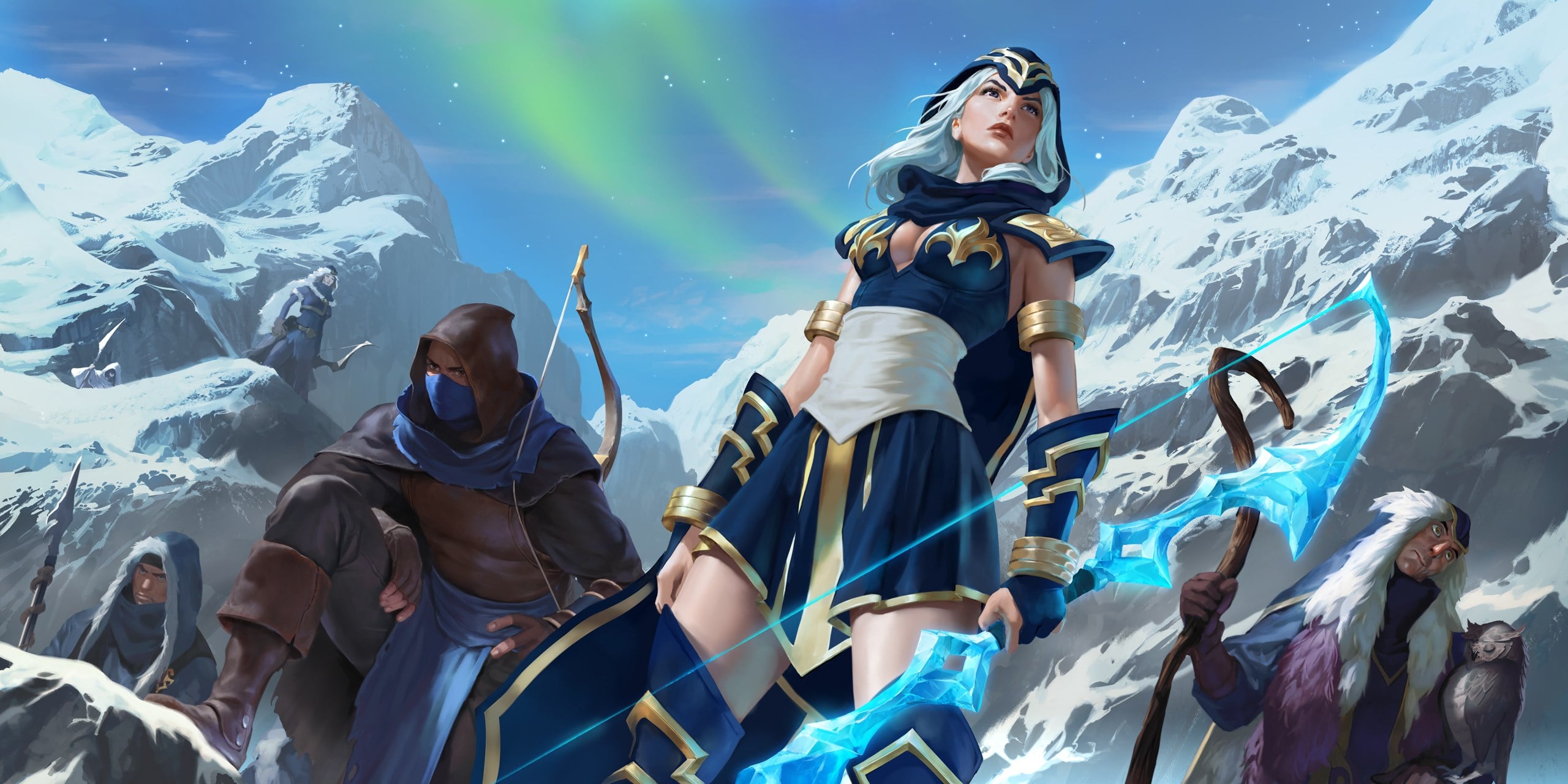 Let me open this with a disclaimer: I’ve played League of Legends for all of fifteen minutes. I have an aesthetic appreciation for the game’s presentation, art style and visuals, as well as the flavor and charisma of the characters — but for some reason I just never got around to actually playing the game.

I know a decent amount when it comes to World of Warcraft lore, so playing Hearthstone and laying down cards like Hogger, Ragnaros the Firelord and Sylvanas Windrunner brought with it an added layer of fulfillment. Unfortunately, I don’t have that kind of knowledge when it comes to League of Legends/Legends of Runeterra, so I’m pretty much going in blind.

TL;DR: I’m rating the Legends of Runeterra art based on vibes and the first impression the artwork and character give me, not necessarily how the card’s in-game effect equates to the character’s lore or playstyle in League of Legends.

My favorite Legends of Runeterra art

Although it was difficult to narrow it down to just the list below, as every single piece rendered by SIXMOREVODKA is breathtaking stuff, here’s my favorite Legends of Runeterra art so far.

(All art, unless otherwise specified comes courtesy of the Berlin-based art team SIXMOREVODKA, who signed exclusively with Riot Games in 2014.) 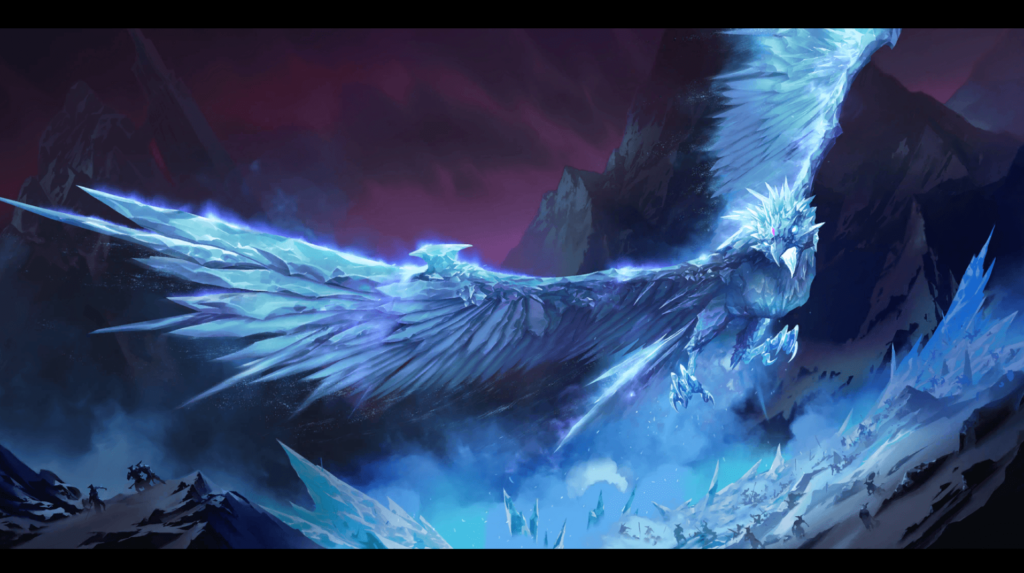 My pride and my soul, my White-Eyes Blue Bird.

Swooping through the cold tundra like a more beastly version of Articuno, this glacier-blue cryophoenix looks every bit as intricate and stunning as a finely honed ice sculpture and as deadly as a harpy eagle.

Love the contrast between the bruise-colored skyline and the charcoal mountains with the wintry lighting of Anivia’s glacial-feathered form.

Much like the Chillwind Yeti or Fen Creeper card art from Hearthstone, Phantom Prankster is a card where the fragment of the illustration chosen for its focus belies the full picture of what’s really going on.

For instance, here’s what Phantom Prankster’s card looks like: 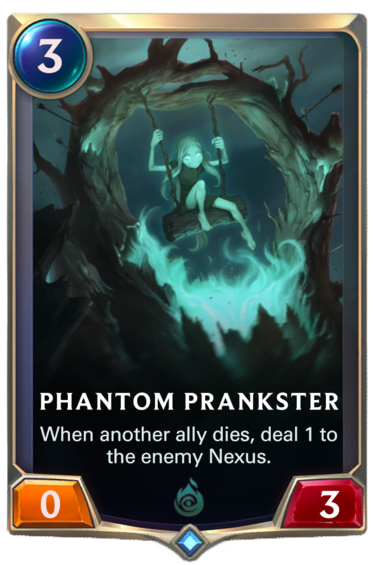 Now take a look at the full art: 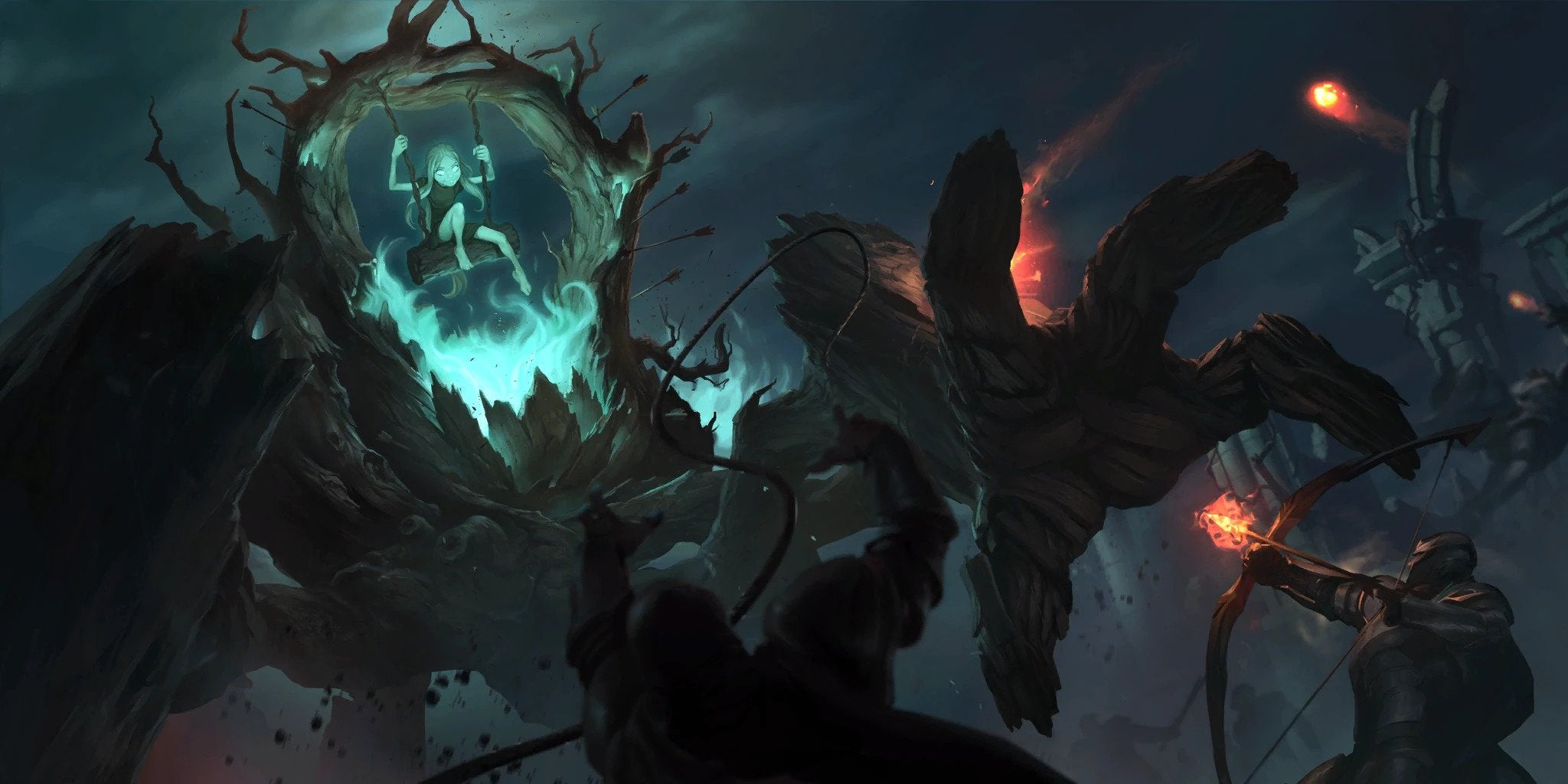 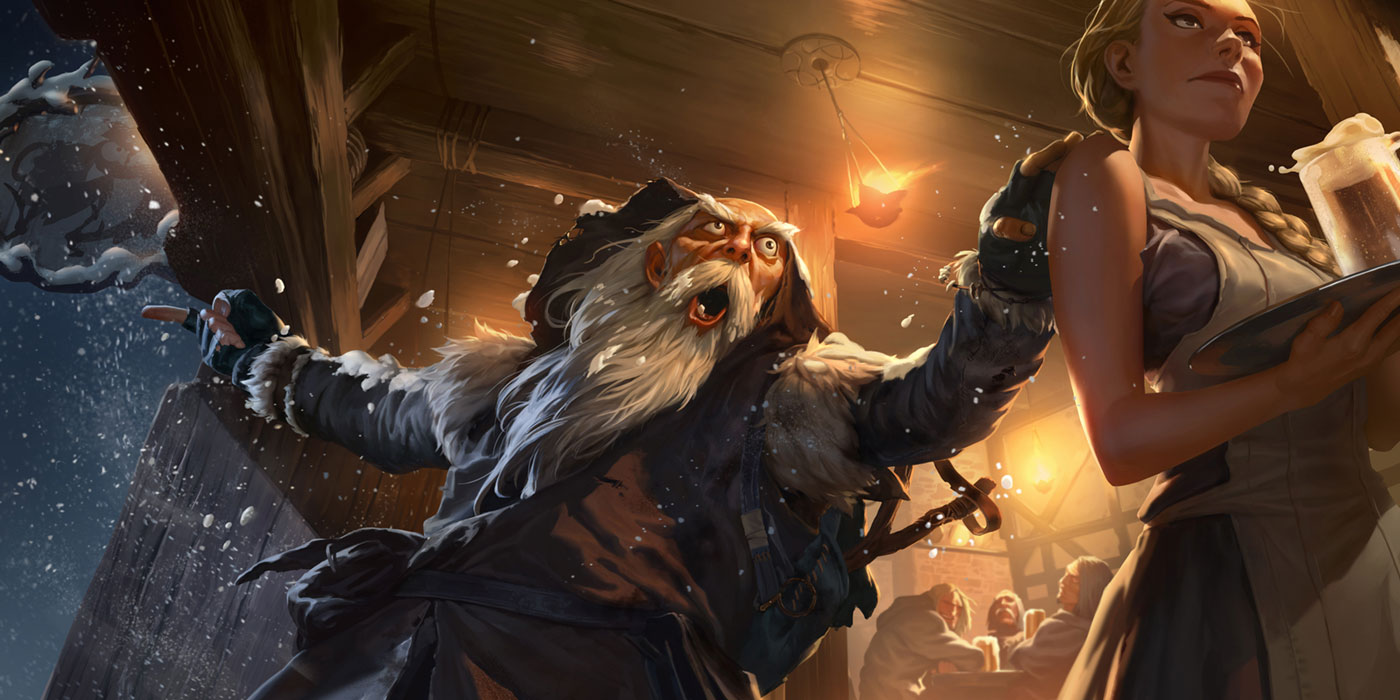 Narrative art is one of my favorite types of art because it can utilize the power of its visuals to tell a story and invoke emotions.

Legends of Runeterra has some remarkable examples of this, including cards with cohesive, synchronous art sequences like Babbling Bjerg/Kindly Tavernkeeper.

“Y-You’ve gotta believe me! It was huge, I tell you, HUUUGE!” Bjerg, who apparently the locals have labeled pejoratively with the nickname “Babbling,” blathers as he storms through the front door of the tavern, eyes wide as saucers, snow drifting from his long, grey beard. “Up there in the mountains! Teeth as big as tombstones! 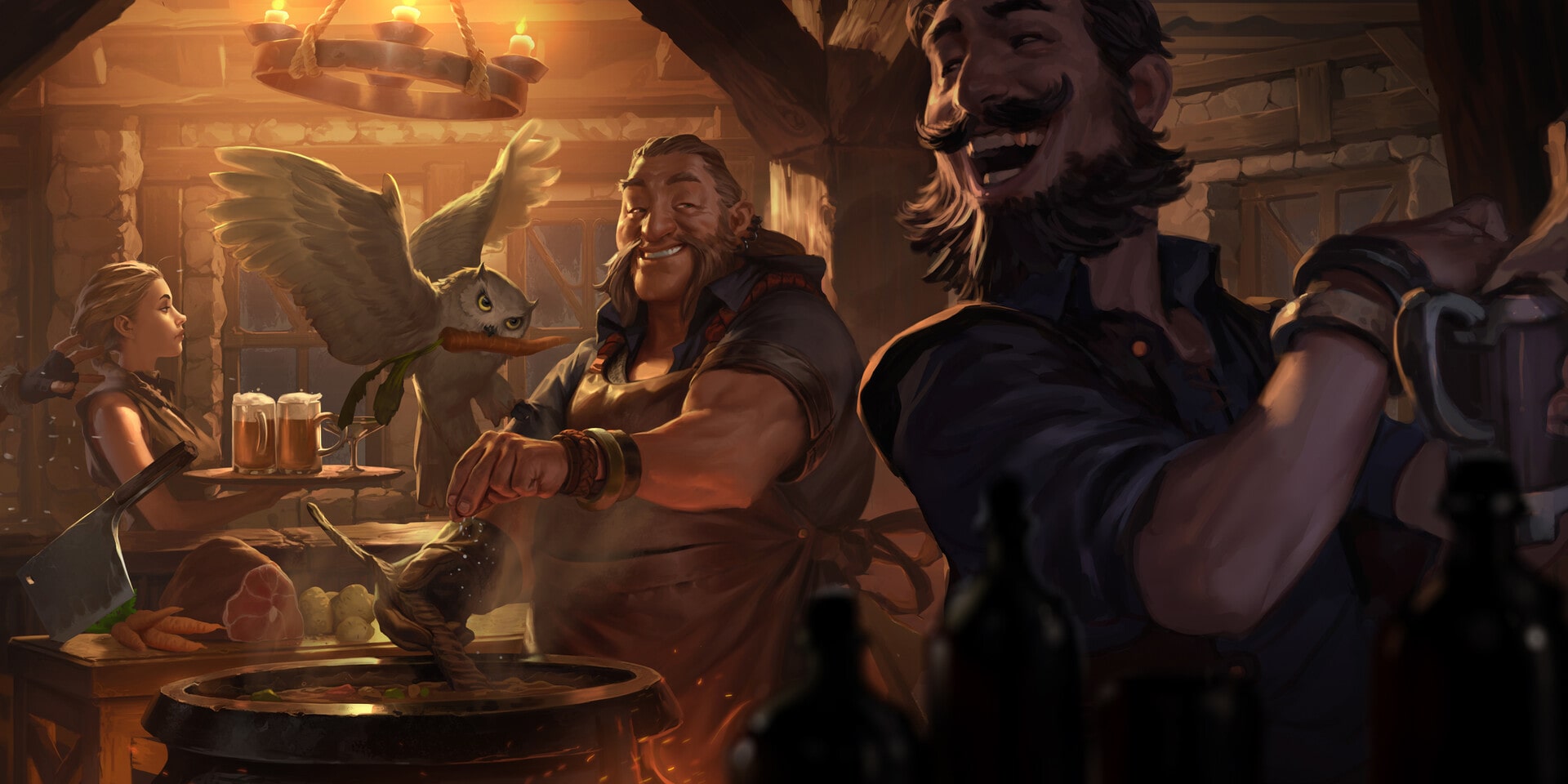 You can see Bjerg’s hand reaching for her in the Kindly Tavernkeeper art as well. 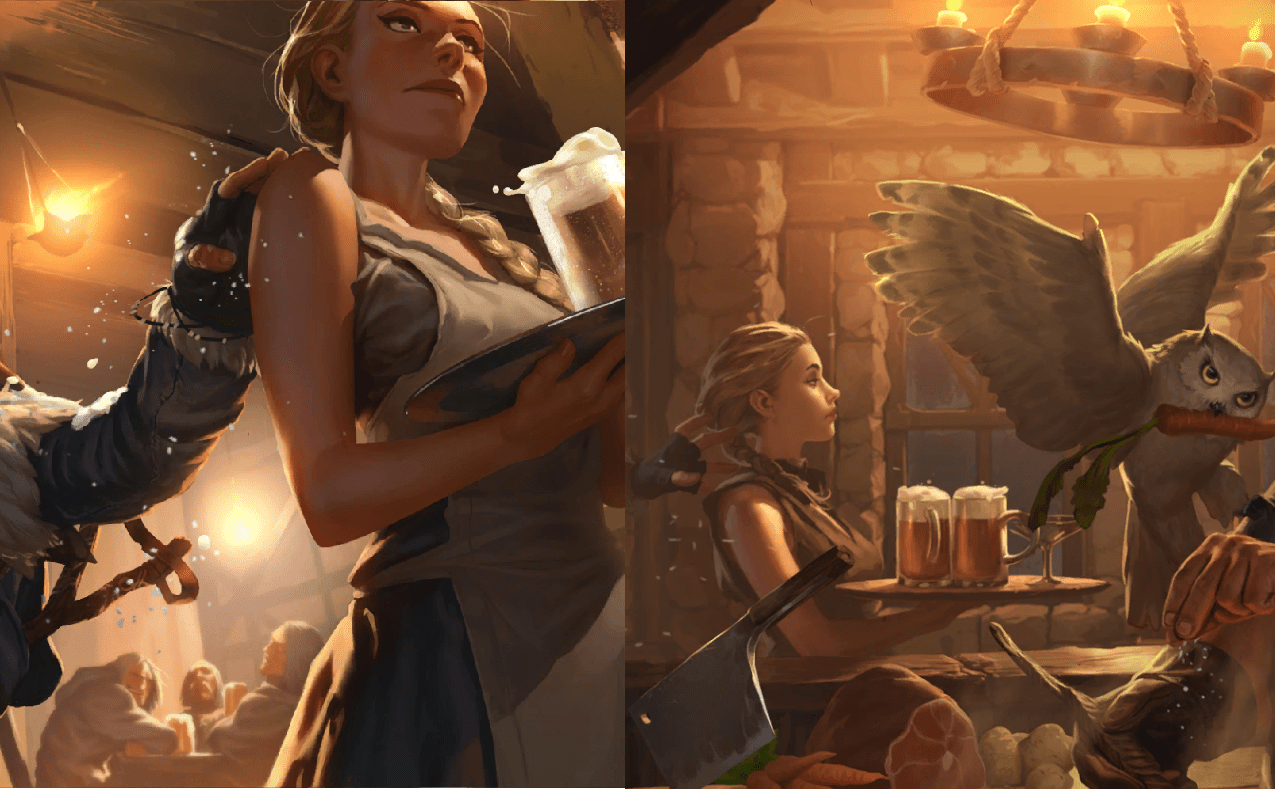 Bjerg also appears in the art for Ancient Yeti, where he’s discovered an enormous creature encased in a block of ice; he’s referred to as Bjerg the Wanderer in the flavor text, a slightly less insulting cognomen.

And Icy Yeti, where he can be seen fleeing for his life from a now enraged beast who has escaped from the block of ice.

Bjerg also appears in the next card, which apparently reveals that an enormous yeti might be the least of he and the townsfolk’s worries…

“I dug myself out from the rubble to find a scar seared into the land around me. Smoldering ash lay where my companions had stood, and in the distance a looming form moved on…” – Bjerg the Wanderer 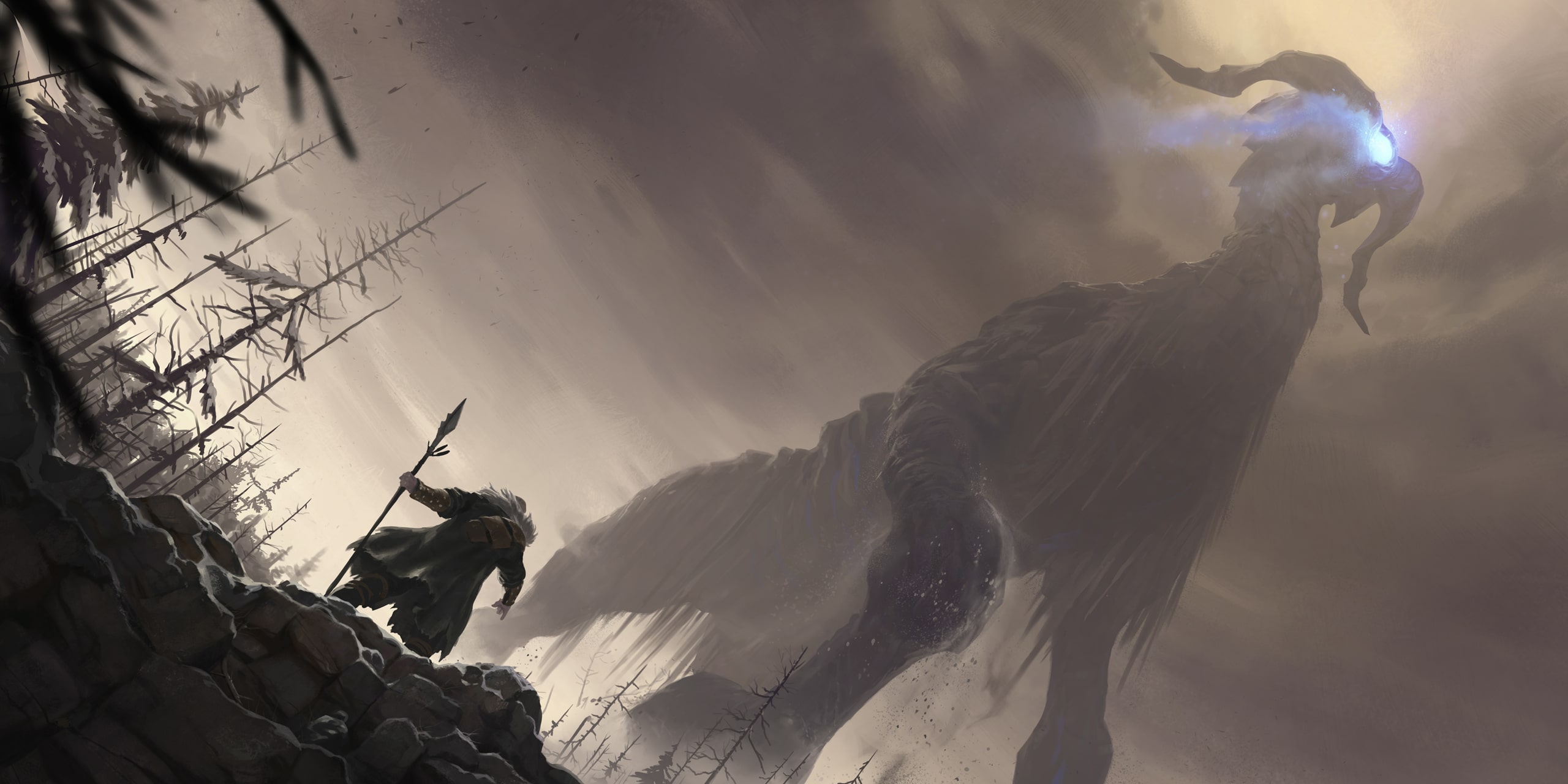 Anyone else getting a bad case of megalophobia?

Maybe the townsfolk should ease up on poor Bjerg and start listening to him before they’re stomped into snow-powder by ice behemoths. 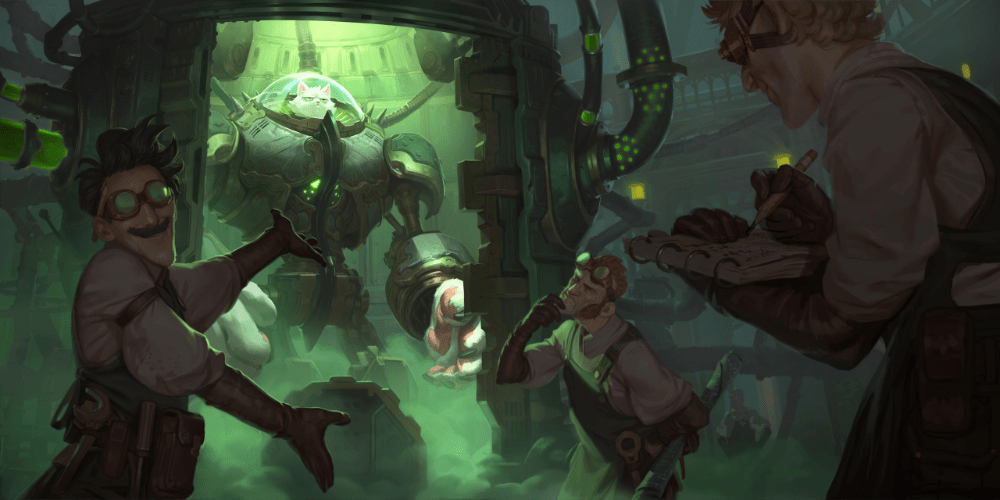 What can be said about this fur-midable Robo-Cat depiction that could paws-ibly make it any better? Nothing, that’s what. It’s purr-fection.

(Er, sorry about that. Had to fill my dad joke quota for the month.) 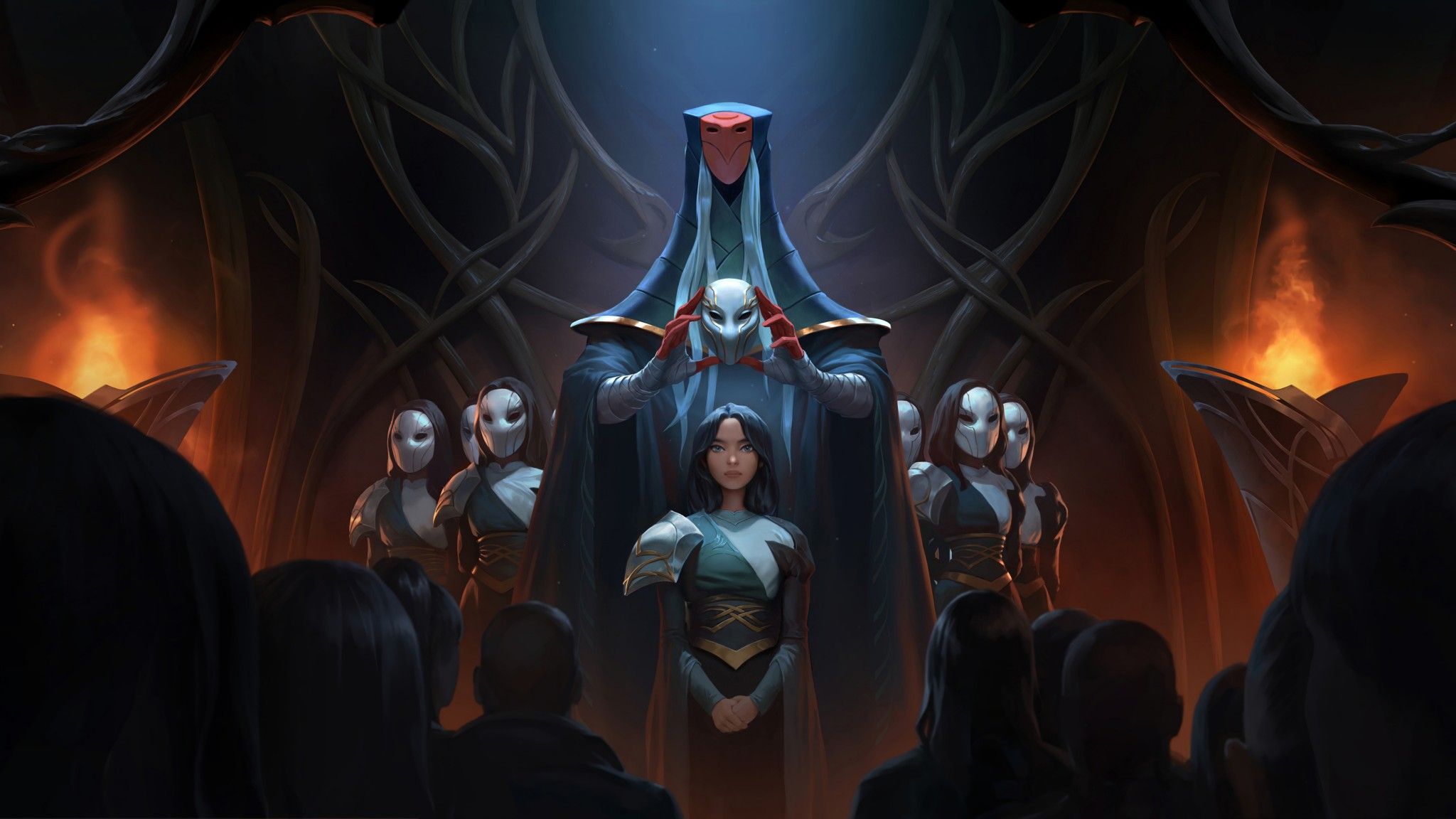 “On this day, yours will become the face of discipline, training, humility, and balance. Today, you become Kinkou.”

I have a rough idea of what the Kinkou Order is in League of Legends, but I’m getting definite Court of Owls (from Scott Snyder’s Batman run) vibes from this piece. The Court of Owls is a secret society in Gotham City that has existed since colonial times and which kidnaps children to train them as deadly assassins called Talons.

I know the Kinkou Order likely doesn’t dabble in activities even a fraction as evil as kidnapping children but still — what the hell is that long-necked, robed, nightmare-fuel creature placing the mask on the illustration’s focal point character?!

Another great example of sequential storytelling through narrative art (I mentioned I really like that type of art already, right?) in Legends of Runeterra is the Cinthria progression, which depicts a bildungsroman, or a story featuring a young protagonist coming of age with succinct and compelling proficiency.

Beginning with Cinthria of Cloudfield (“Each night before bed, my mother would tell me stories of Demacia’s greatest heroes as she sharpened her sword. My dreams were full of adventures, and today I’ll begin a story all my own.”), which depicts Cinthria staring in wide-eyed wonderment at the Great City of Demacia: 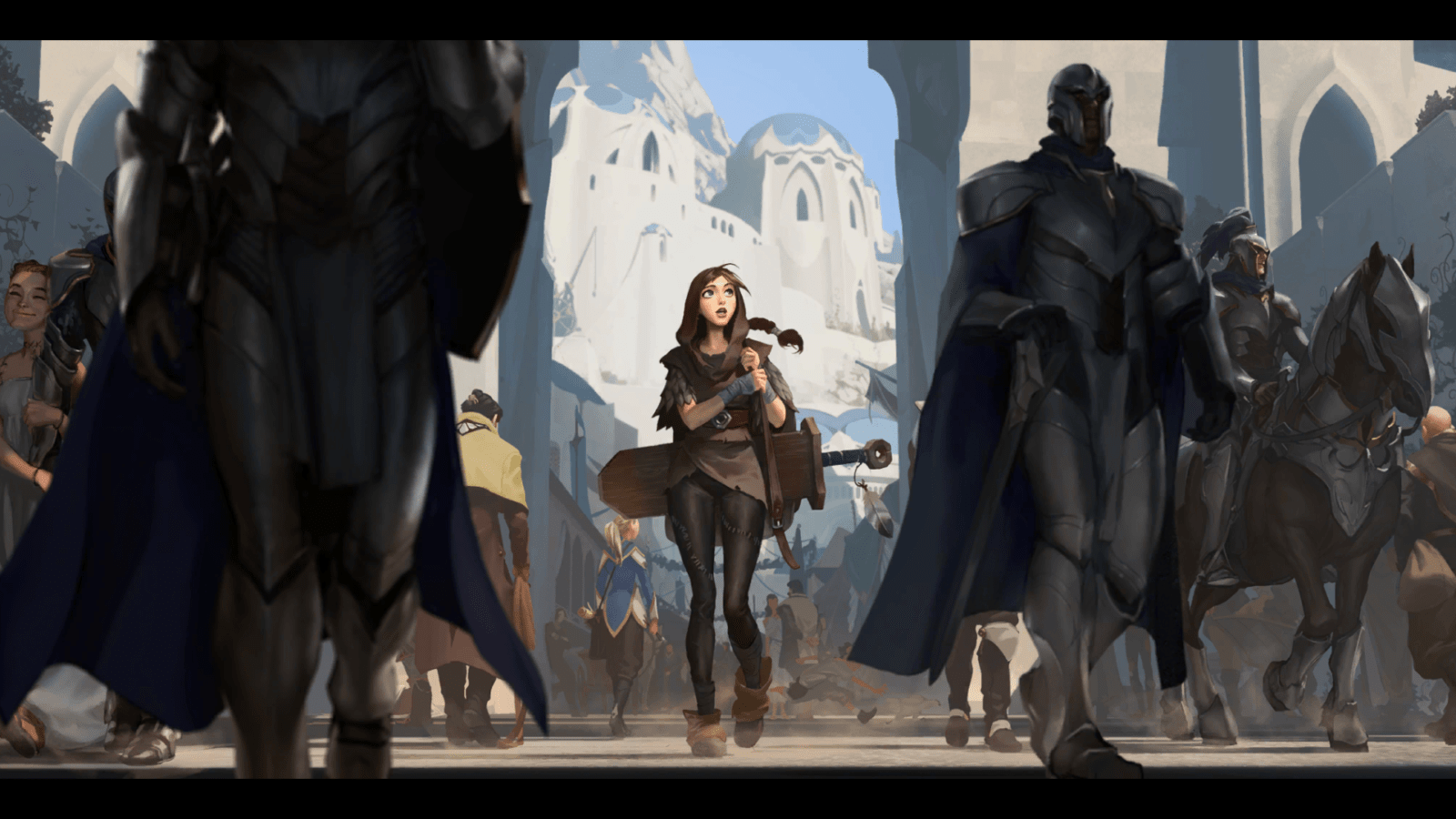 Progressing to Vanguard Squire, where Cinthria is cutting her teeth as an initiate in one of the most prestigious and elite order of Demacian warriors: 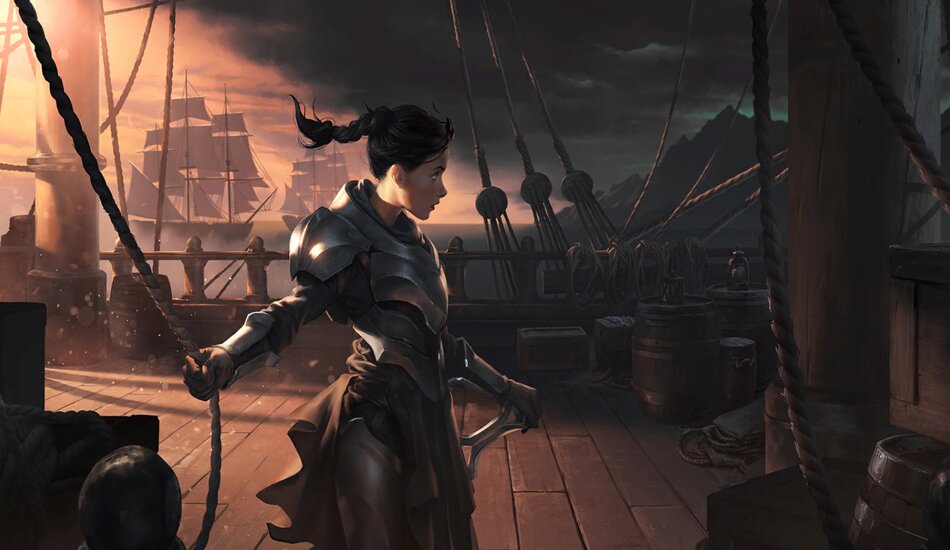 And ending with Cinthria the Bold (“Legends, tales–they were never just fiction to me. They were adventure calling my name. I left Cloudfield to discover my own adventure, only to find I would have many. And they’re just beginning.”), where Cinthria has realized her full potential and become a full-fledged, high-ranking officer in the Dauntless Vanguard.

“I cannot be broken!”

Scarmother Vrynna looks crazy tough. Like a hard-ass conflation of Ygritte the Wildling from Game of Thrones, Cable from X-Force and Cruella de Vil from 101 Dalmatians. When you first saw her card illustration in Legends of Runeterra, you probably thought to yourself, “I wouldn’t want to get on her bad side.” 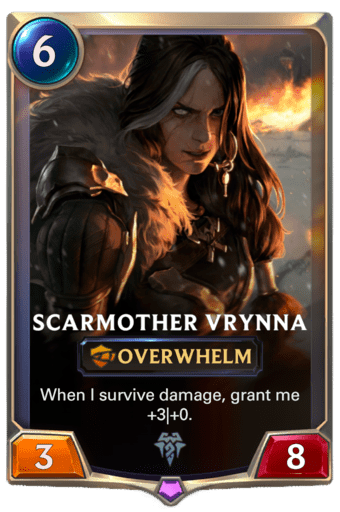 Then you read her card flavor text: “I would die shivering in the cold before sharing a hearth with Ashe’s weaklings. But if they desire warmth, I will give it to them.”

First part sounds real stubborn but, wait, what was that? She’s going to give Ashe and his “weaklings” warmth? Maybe underneath that rough exterior Vrynna really has a heart of gold, after all? 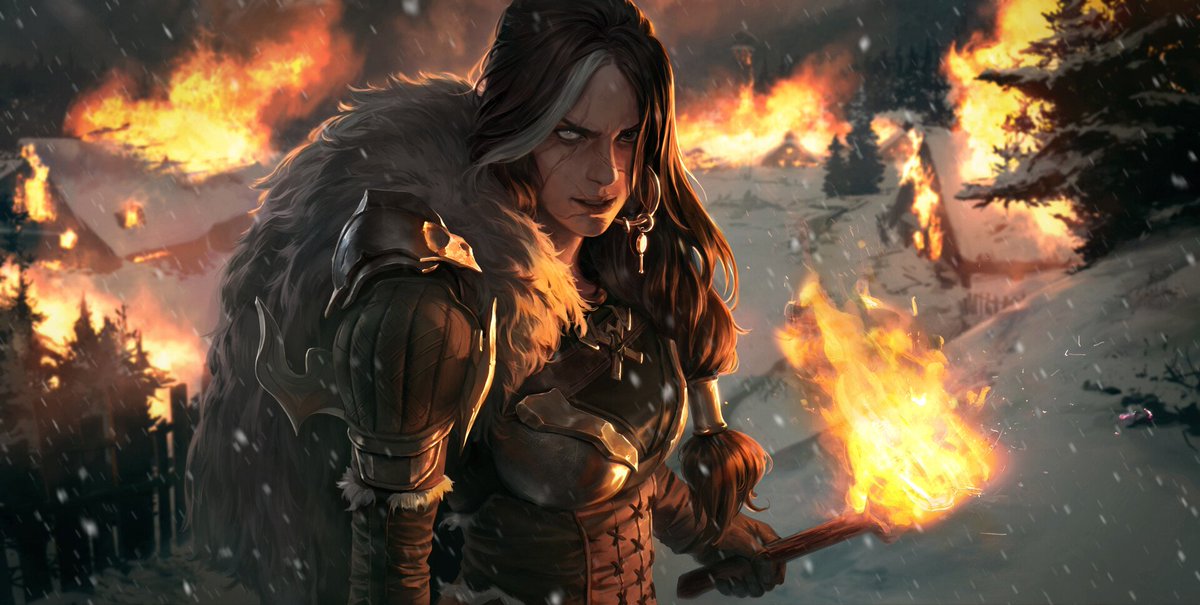 “During winter’s reign, we heard the tread of Footsteps ‘cross the snowy floor. In its wake, new vine and leaf emerged to rearrange The forest floor and herald season’s change.” — Shon Xan poem 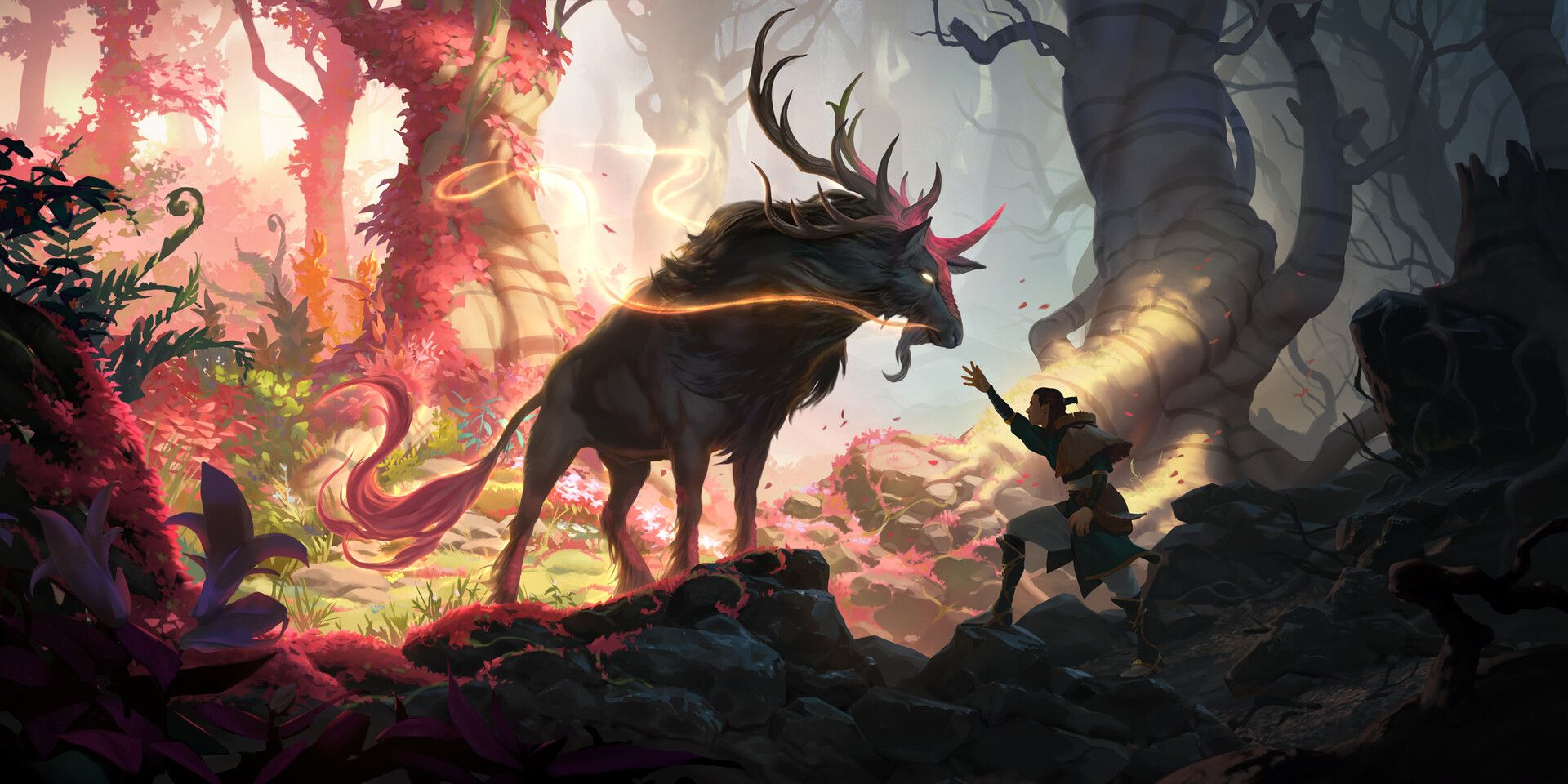 This is some straight-up powerful art. It represents a meeting of two worlds, with the imposing elk-Herald standing on the lush, thriving side of the forest and the man reaching out with a mixture of hesitance and composure on the shadowy, withered side.

I love the way the bright, orange-pink hues of the trees and flora on the Herald’s side contrast with the cold, dark rocks and gnarled deadwood of the opposite. I love the Herald’s glowing, ethereal whiskers which trail behind it like they’re underwater, tendril-like. I love how the illustration evokes a strong sense of reverence for nature but also an overall sereneness as well.

Kato the Arm, Shiraza the Blade 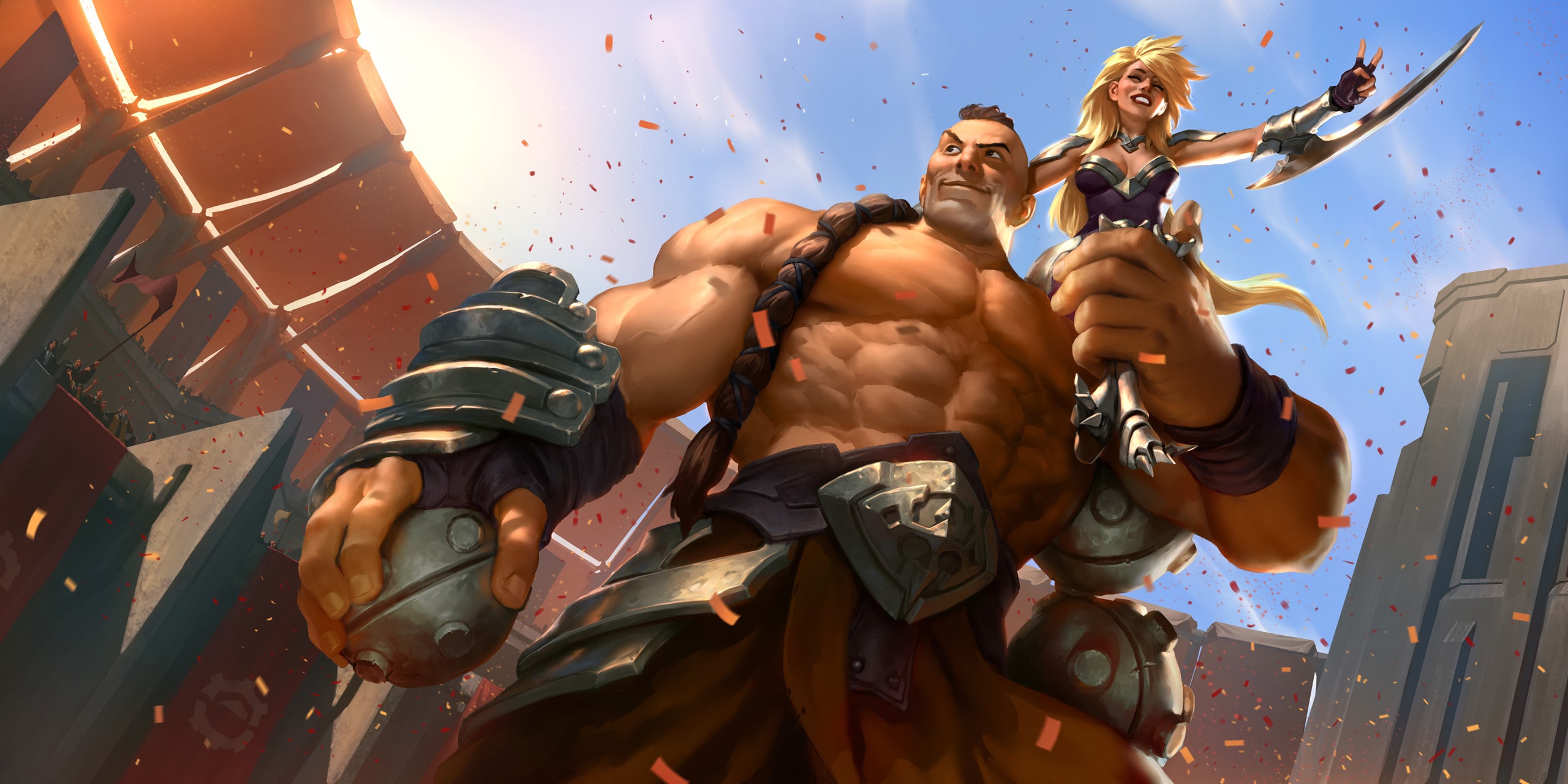 Kato the Arm and Shiraza the Blade are a pair of cards which depict a duo of gladiators who may or may not be romantically involved. They also perform a maneuver in gladiatorial combat which is an homage to Colossus and Wolverine’s Fastball Special from the X-Men. I dig. 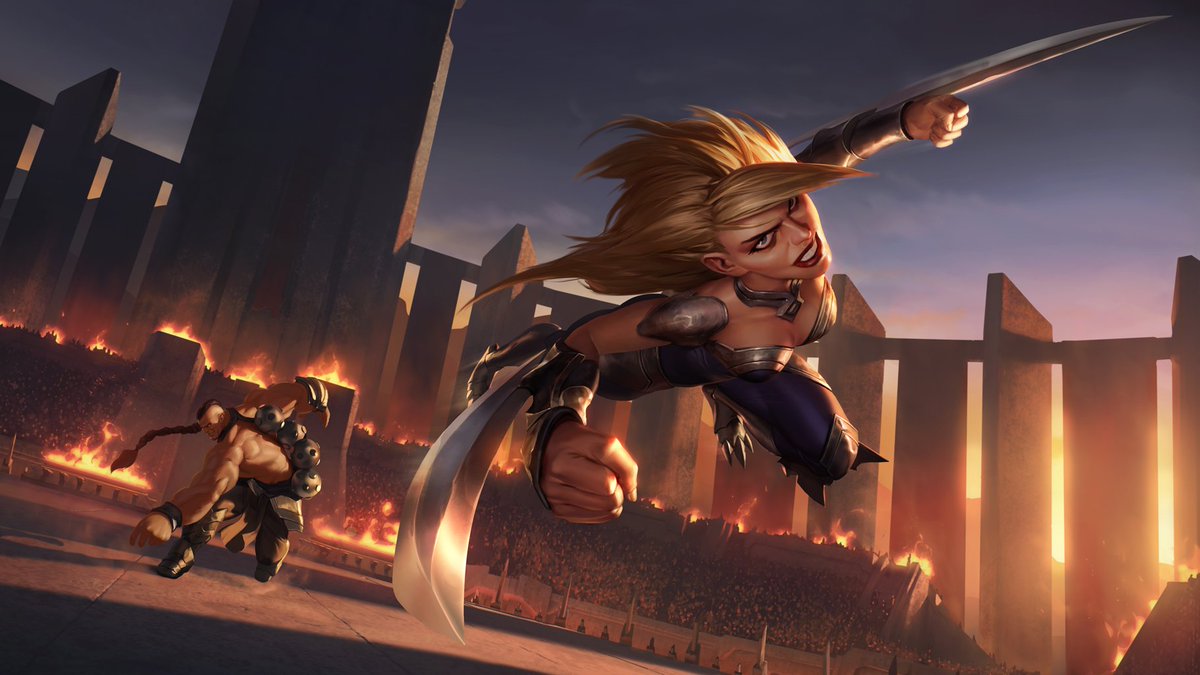 Oh, Kato and Shiraza are definitely f—–, by the way. 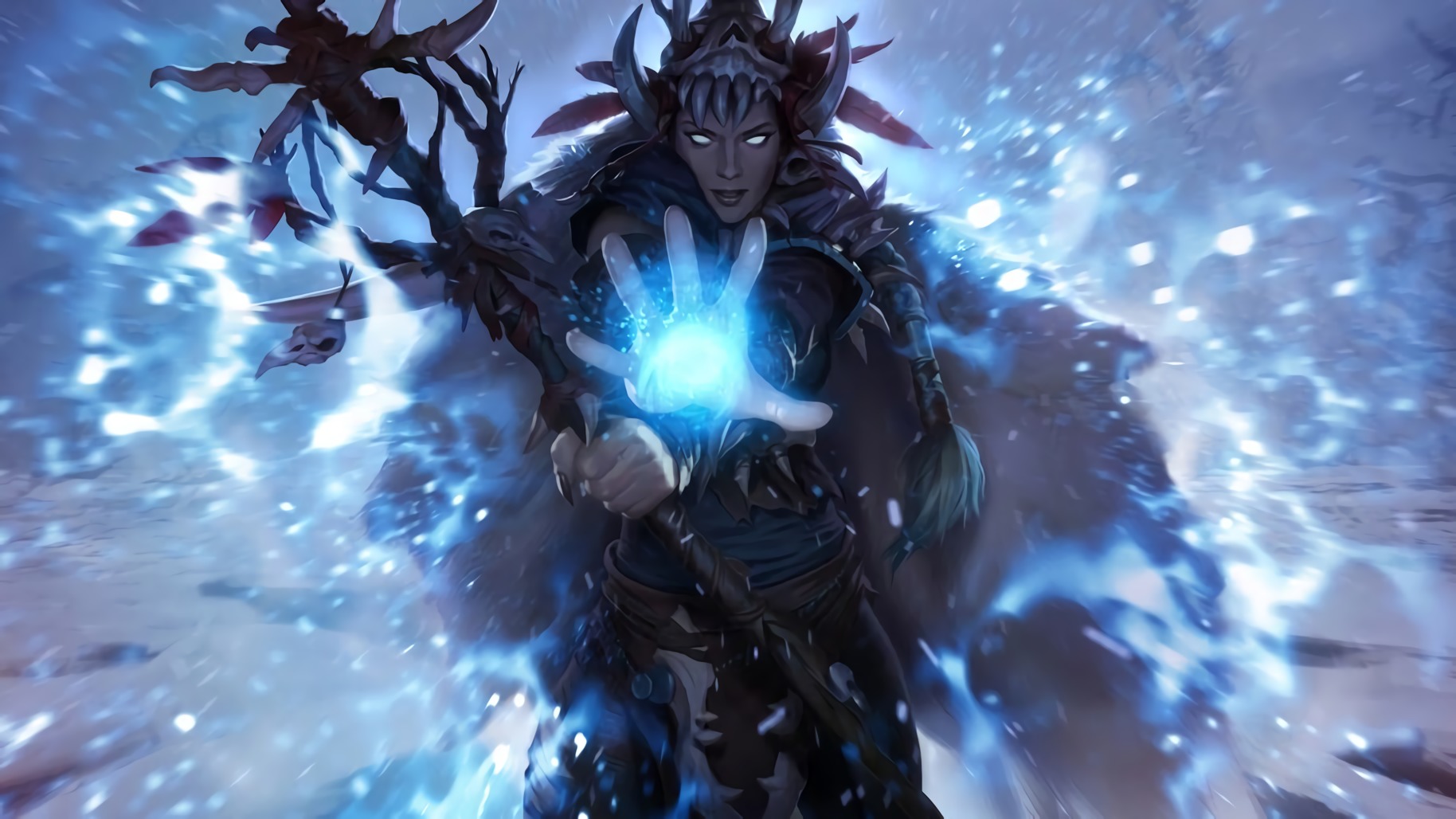 Maybe I’m still salty that Moorabi was an underpowered Legendary card or Freeze Shaman never became a viable archetype in the competitive Hearthstone meta because I like Rimetusk Shaman’s art a whole lot.

I like the close-up, full frontal angle of the composition. I like how the background is a blurred burst of snow and ice. And I really like how the Shaman looks like she’s charging up an icy Hadouken, ready to blast whomever’s in her way. 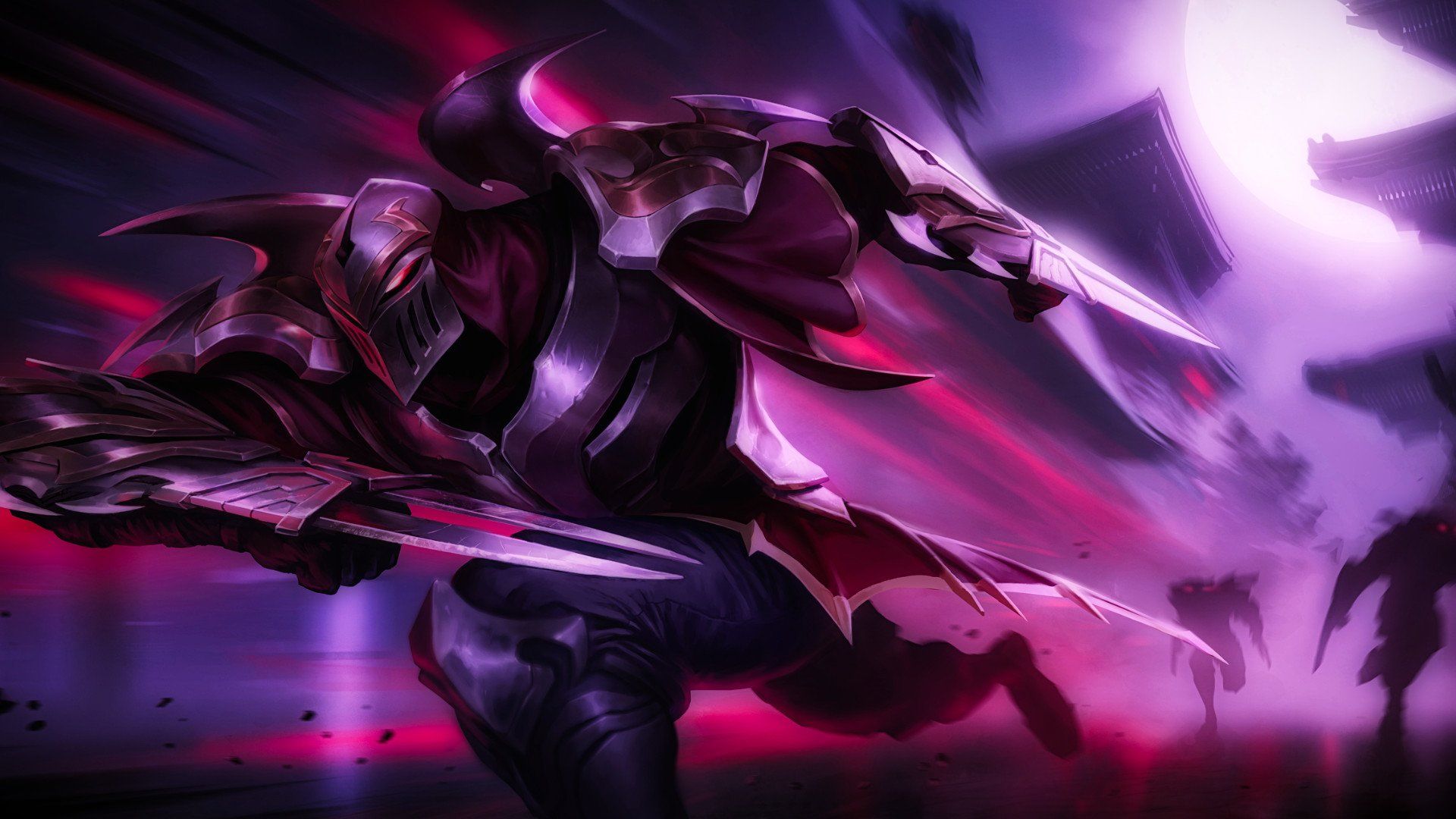 I’m gonna be honest: I like this piece because no matter how old you get, ninjas will always be pretty cool. And Zed is one dope looking ninja — like a mix of Lord Zedd from Mighty Morphin’ Power Rangers and The Shredder from TMNT.

I’m feeling the perspective of this piece; the sense of dynamic energy and the way Zedd and his Living Shadows look like they’re slicing a path between the thatched-roof pagodas. 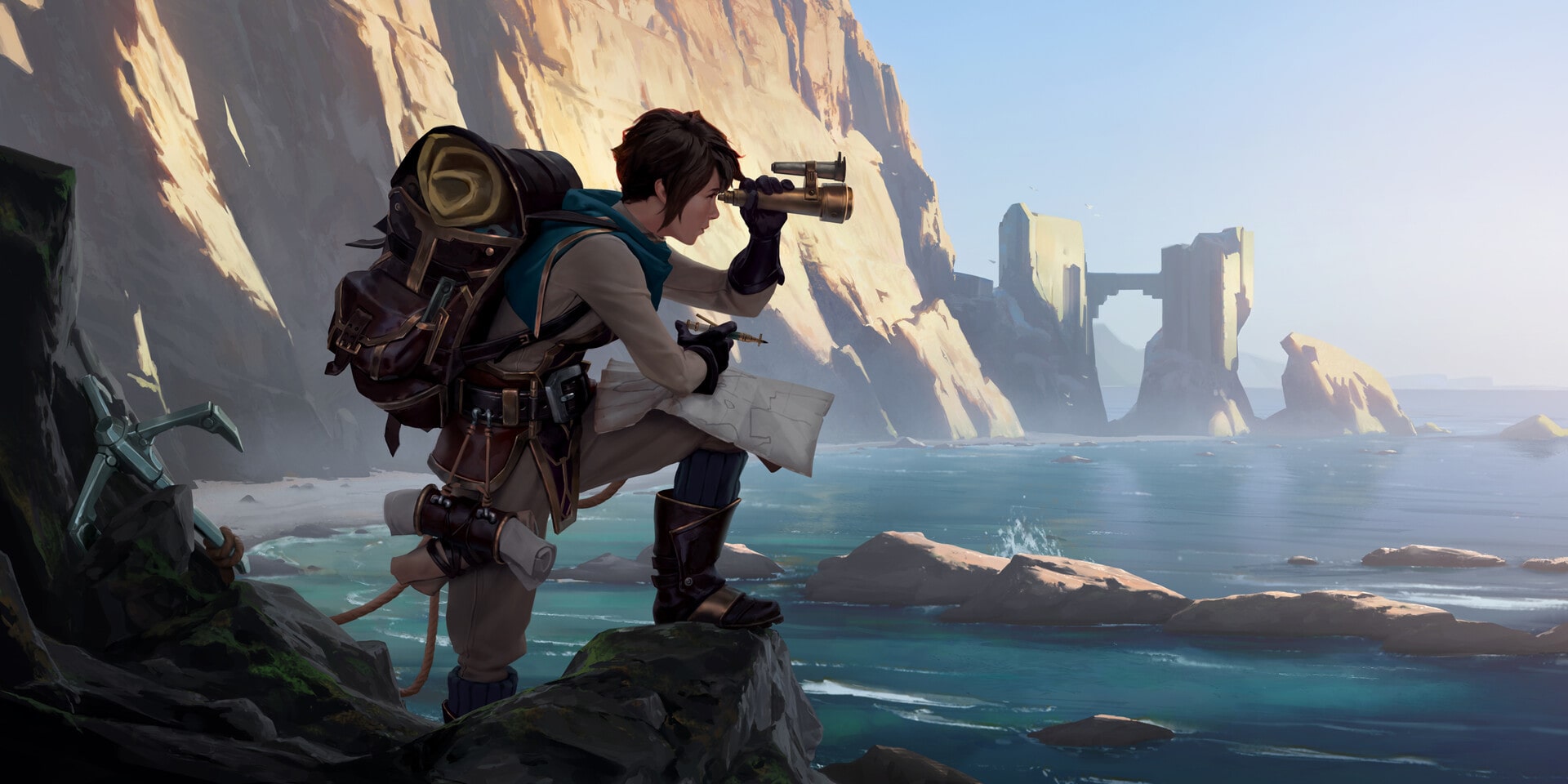 If this piece by Monika Palosz doesn’t make you want to go for a long walk on the beach or out adventuring on the open sea… you’re probably not into that sort of stuff.

Notwithstanding, still an awesome, inspiring piece. I can hear the ocean waves lapping the rocks; hear the chatter of seagulls; smell the salt water; and feel the grit and determination in this intrepid mariner as she goes about her business.

Which Legends of Runeterra art composition is your favorite? Did I leave out a particularly striking piece that should have made the list? Let me know in the comments.

In this article:Featured, legends of runeterra, riot