It might be hard to believe it these days, considering Mario has had his mustache in everything from sports to puzzle to party games (and with the recently released Paper Mario: The Origami King being the thirteenth RPG game starring Mario), but the thought of Mario in a role-playing-game was once considered inconceivable.

That’s why when Super Mario RPG: Legend of the Seven Stars was announced back in 1995, a collaboration of unprecedented, epic proportions between highly revered developers Nintendo and Square, expectations were high. And maybe a little bit puzzling too. Could even the great Shigeru Miyamoto and talented Square developers like Chihiro Fujioka pull off one of the most epic video game team-ups of all time? Perhaps an even better question at the time: Why put their efforts into a role-playing-game starring Mario, a seemingly disparate combination?

“‘Why make a Mario RPG?’ is actually something that many of the employees at Square asked, too,” Super Mario RPG director Chihiro Fujioka said in an interview with FamiCom Magazine back in 1995. “But I think it’s turned out to be quite a natural combination of Square’s expertise and Nintendo’s expertise.

In Square’s case, that expertise was RPGs; with a number of critically acclaimed, narratively-galvanized, character-driven gems such as the Final Fantasy series, Secret of Mana, Breath of Fire, Chrono Trigger and Secret of Evermore under their belt.

Nintendo’s expertise? Among myriad other things, Mario, the most iconic video game character of all time.

Yoshio Hongo of Nintendo (F-Zero, Earthbound) believed such a dream collaboration between the two respected video game developers would fill a void for a wide variety of gamers, especially in a territory where Square had not yet found much success: The United States.

“Square’s RPGs sold well in Japan but not overseas. There have been calls from all ages, and from young girls, for another character to which they could become attached. Mario was the best, but had not been in an RPG,” Hongo said in an interview with Maximum: The Video Game Magazine. “Nintendo’s director, Mr. Miyamoto also wanted to do an RPG using Mario. There happened to be a chance for both companies to talk, which went well.” 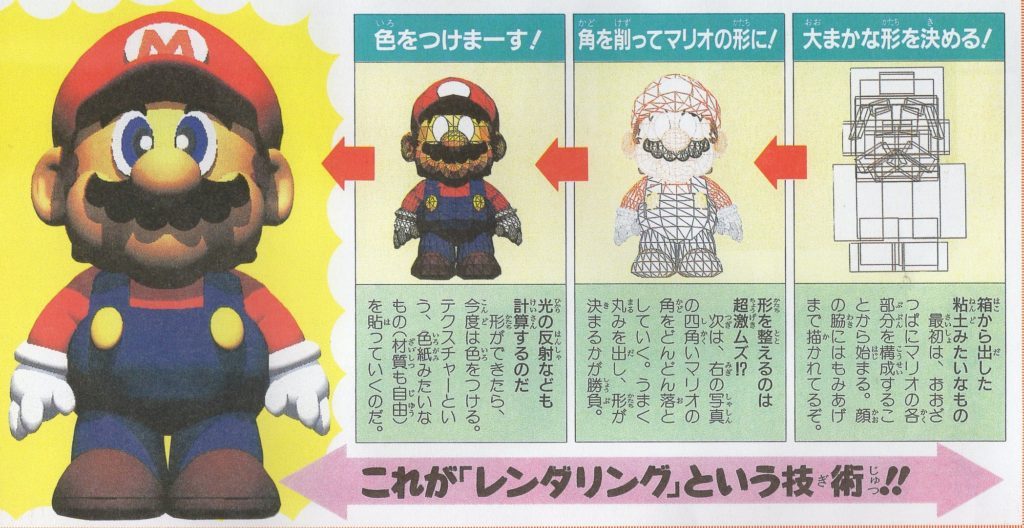 A breakdown of the design process for Mario’s 3D-rendered look.

That talk cemented the idea of what would become Super Mario RPG. As for the incongruity of interjecting Mario, a side-scrolling, platform-hopping, Goomba-stomping, dynamic action hero into the much more deliberate, menu-laden, stat-driven, turn-based world of JRPGs — the challenge of the synthesis and the thrill of the unknown was part of the allure for Fujioka.

“During a business meeting with Nintendo, the topic came up of us working on something together,” said Fujioka. “Nintendo has Mario, and Square has RPGs… well, why not simply stick the two together? Being entirely different things, we had no idea how this would turn out… but that’s actually what made it so exciting.”

Exciting, but still a challenge, particularly when it came to balancing the game’s flavor. The recipe had to be just right: an RPG that retained the essence of Mario and vice-versa.

“Getting everything straight during that first phase of the development really took a long time,” said Fujioka. “Mario is Nintendo’s character, so there was a lot of back and forth with them, searching for a way forward that would satisfy both Square and Nintendo. Miyamoto is also on the main team, so yeah, I mean it just took a really long time before we could get down to brass tacks.”

“Naturally, all of our staff has a lot of love for Mario, so there were a lot of strong opinions flying around. ‘This isn’t Mario!!!’ or ‘Mario would never do this!’ or ‘It’s not Mario if we don’t have this!'”

In other words, Square couldn’t just throw Mario into an RPG like Secret of Mana or Final Fantasy and call it a day.

“The main concern for all involved was that we didn’t want to make a ‘normal’ RPG that simply [substituted] in Mario characters, like some cheap Final Fantasy sprite-swap,” Fujioka explained. “And yet, the basic core of the game was Mario. I mean, the title has ‘RPG’ in it, so we knew that much, but should it be an action RPG, a turn-based RPG, or something else?”

Square and Nintendo chose something else.

“Our answer was it’s a Mario RPG, which means an RPG featuring things that only Mario can do: jumping, dashing, and so forth.”

This meant designing a unique form of RPG which hinged upon Mario’s movement.

“I think the essence of Mario lies in his movement,” Fujioka explained. “The way he jumps, jumping on enemies to destroy them, transforming with mushrooms, running like mad after you get invincibility from a star… in other words, how the controls feel. Mario games are very tactile—you’re always pressing buttons.”

“We really wanted to make an RPG where the player is always engaged with the controls. In RPGs, there’s usually a lot of waiting. The majority of the time is probably spent not pressing any buttons, in fact. But pressing buttons, the controls themselves… that’s a huge part of the fun.”

Incorporating Mario’s dynamic sense of movement into an RPG game, something that wasn’t usually done at the time was a major reason for the isometric 3D view, which allowed for Mario to jump onto tiered platforms, evade enemies to avoid going into battle and of course, punch question blocks for coins and other trademark Mario rewards. 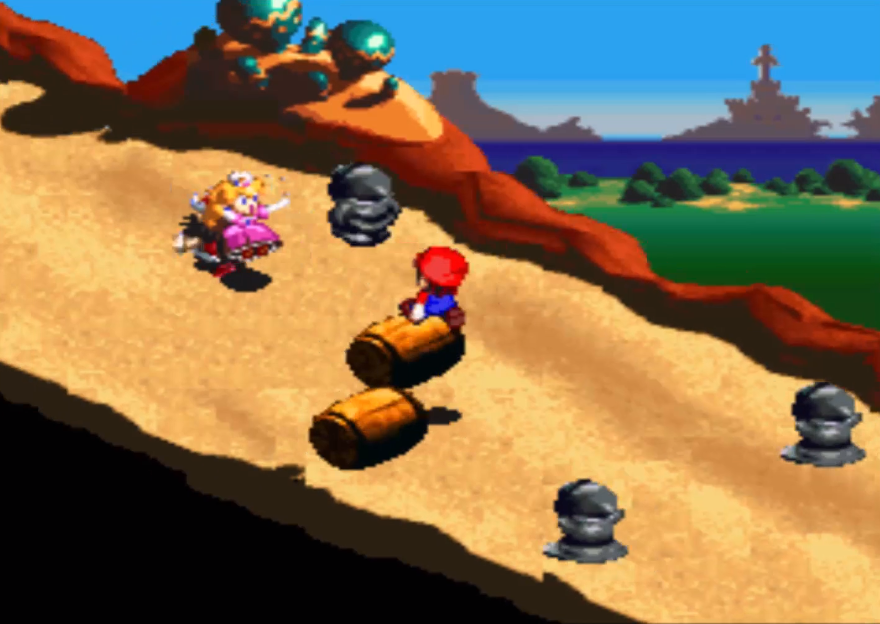 Super Mario RPG’s 3D isometric view made Mario’s movement, like running and jumping an integral part of the RPG.

“I think our decision to use an isometric view—3D, in other words—really brings the world of Mario to life,” Fujioka said. “The usual complaint about isometric visuals is that yeah, they look pretty, but they make the controls difficult. While that’s true, the 3D isometric view allows us to show Mario’s world in a way never seen before, so I think it was the right choice.

Then, for the control problem, we solved that by allowing Mario to move in all 8 directions, as opposed to the usual diagonal-only movement of isometric games. That includes dashing and jumping: this is Mario, after all, so we talked about how he needed to do more than just walk around the field.”

As for what it was like working with legendary video game designer Shigeru Miyamoto, Fujioka explained the process as good-natured and informative. “We had periodic meetings with Miyamoto, and he thought the majority of our ideas were interesting. He would rarely say a certain idea was ‘bad’; rather, he would point out how if we changed this, or re-arranged that, it would be more interesting, and more ‘Mario’-like. He gave us a lot of advice like that, which we used to adjust things in the game.”

Miyamoto, one of the most influential video game designers of all time, stressed one tenet above all others when it came to Super Mario RPG — make an RPG that was fun for everyone. One deep enough to sate Square’s devoted RPG fanbase but intuitive enough for those who might have been newcomers to the genre to appreciate as well.

“One day we were talking with Square, and they revealed that they wanted to create an RPG that would have worldwide appeal, with characters that both children and adults could love,” Miyamoto said in a 1995 interview with Game-on! Magazine. “We had many meetings and discussions after that, and eventually hit upon the idea of a Square-Nintendo collaboration that would feature both our strengths.”

Being a Mario game, a family friendly adventure was important to Miyamoto. “Another big point was to make ‘an RPG where no blood is shed.’ I think the game will be warmly received by Mario fans, RPG fans, and video game fans alike.”

Mario receiving the iconic Hammer, the only weapon Miyamoto wanted him to wield.

This approach made Square have to reconsider one of their most long-held RPG tenets: weapons. “Before we even started making Mario RPG specifically, we had this pre-conception at Square that RPGs==weapons,” said Fujioka. “As our conversations progressed with Miyamoto, however, it became clear that this would be weird for a Mario game, that it didn’t seem to fit. When we realized that, it was a huge change in the direction of the development. We had always imagined the enemies would have weapons though. One thing we did leave in was the hammer, which Miyamoto insisted on having. Personally, I think getting hit with a hammer is more painful than being cut by a sword, but… (laughs)”

Dispelling some of their longhold RPG developmental techniques was stymieing to Fujioka and his team at Square, but liberating as well. “It may sound strange for us to put it this way, but Square has made various kinds of RPGs: Final Fantasy, Seiken Densetsu, Romancing Saga… and those established series can actually act as restrictions on our ideas. Once we freed ourselves of them, we were able to say, ok, let’s just make a world that brings out the best of Mario.”

Of course, the team couldn’t leave everything they wanted in the game. When asked if there were any elements from Mario which he wanted to incorporate that didn’t make it into the final version of Super Mario RPG, Fujioka brought up Mario’s Mushroom transformation. “We wanted to have the mushroom mechanic—where little Mario eats the mushroom and becomes big Mario, and so forth—but we were unable to realize it. Partly it was hardware limitations, but it just looked weird for Mario to be walking around the map in different sizes (laughs). It’s too bad, as we had wanted to include some dungeons that you’d only be able to reach as little Mario.”

What did you think of Shigeru Miyamoto and Chihiro Fujioka’s reflections on the developmental process of Super Mario RPG? If you could ask them any other questions about Super Mario RPG‘s creation, what would they be? Let us know in the comments.

In this article:Featured, super mario rpg 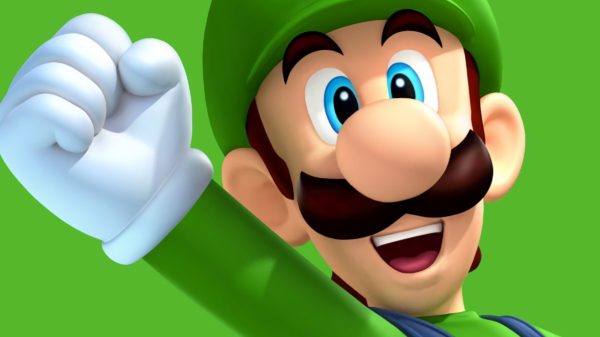