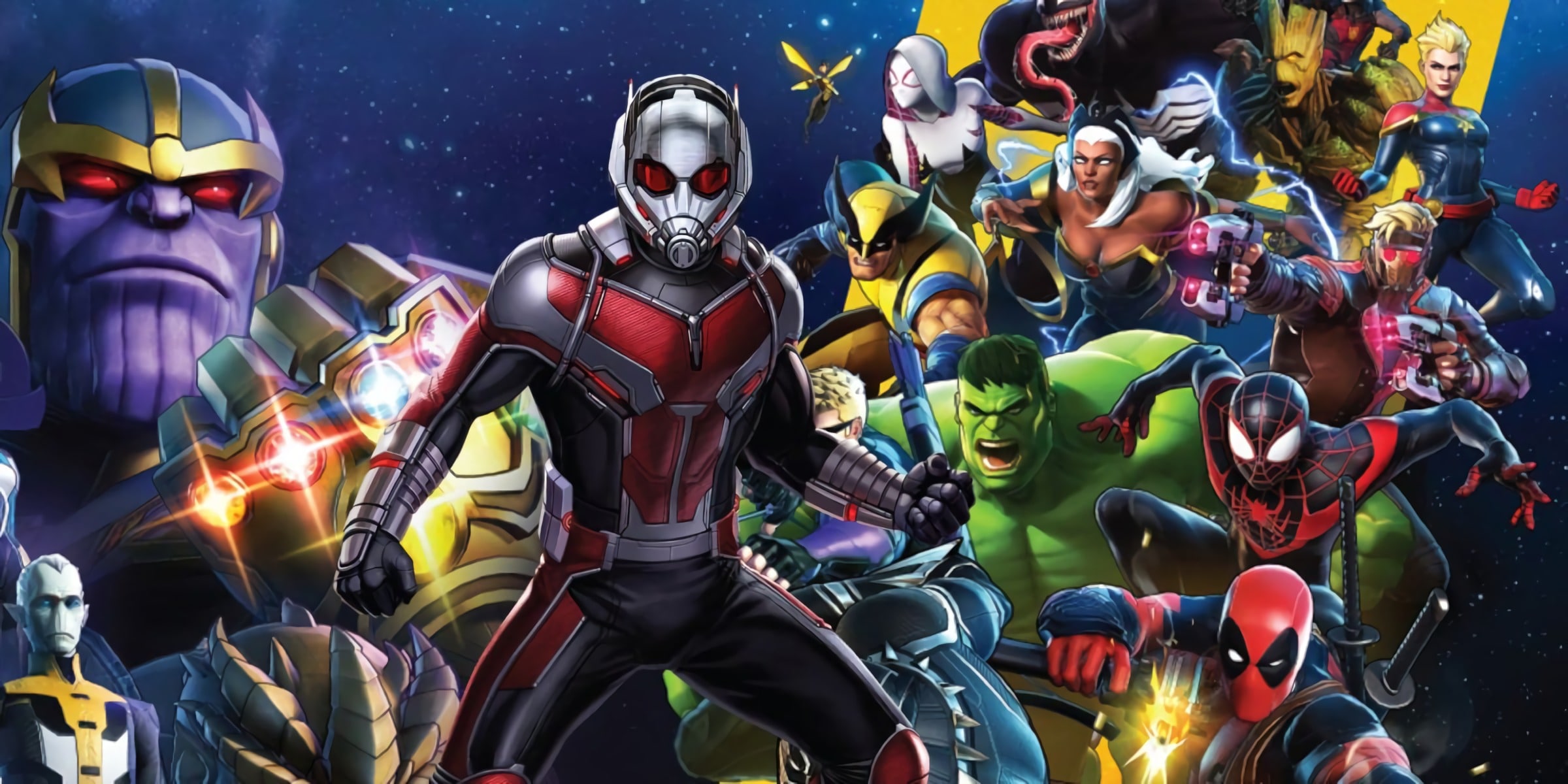 Warning: Spoilers for the Marvel Ultimate Alliance 3: The Black Order — Shadow of Doom expansion ahead.

You unlocked the Fantastic Four (and Dr. Doom). You dismantled countless Doombots. You annihilated Annihilus. And you finally vanquished God Emperor Doom himself on Ultimate difficulty (check out our Marvel Ultimate Alliance 3: Shadow of Doom walkthrough if you didn’t). And now you’ve gained the ultimate reward, the final secret character in Marvel Ultimate Alliance 3: The Black Order…

Don’t get me wrong. I’m not downplaying the fact that you can play as Thanos with the freaking Infinity Gauntlet equipped in the least; Infinity Thanos is an absolute beast befitting of the most powerful being in the Marvel universe.

But there’s something about another Thanos that feels a little disappointing from both a varietal and missed opportunity standpoint (and who in their right mind is going to choose regular Thanos over Infinity Thanos now?)

The following are some characters I think would’ve made more distinctive and intriguing character inclusions in Marvel Ultimate Alliance 3 than Thanos (Infinite): 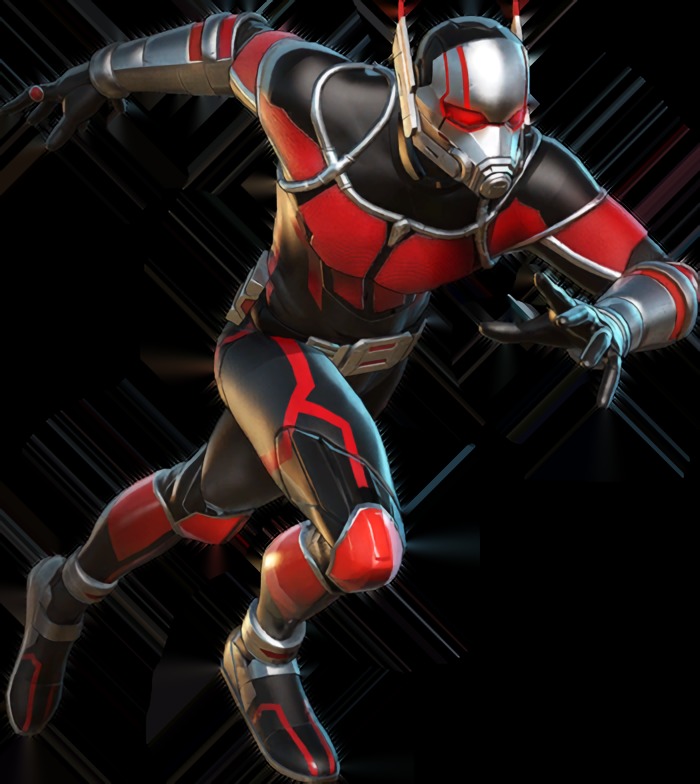 Wasp is already a top-notch choice in Marvel Ultimate Alliance 3; so why isn’t her partner in Pym particles, Ant-Man a playable character?

Ant-Man already makes an appearance in a big way (he’s literally as tall as a skyscraper) as an NPC in the Avengers Tower level when he comes to the heroes’ aid against Ultron and Ultimo but I was disappointed to see a distinct lack of an “Ant-Man has joined the Alliance” screen thereafter.

Ant-Man’s skill-kit could include an array of Pym Particle-employing maneuvers like shrinking and growing attacks as well as fun utility moves like calling in strategic ant reinforcements. And of course, some sweet Ant-Man/Wasp synergy thrown in for good measure. 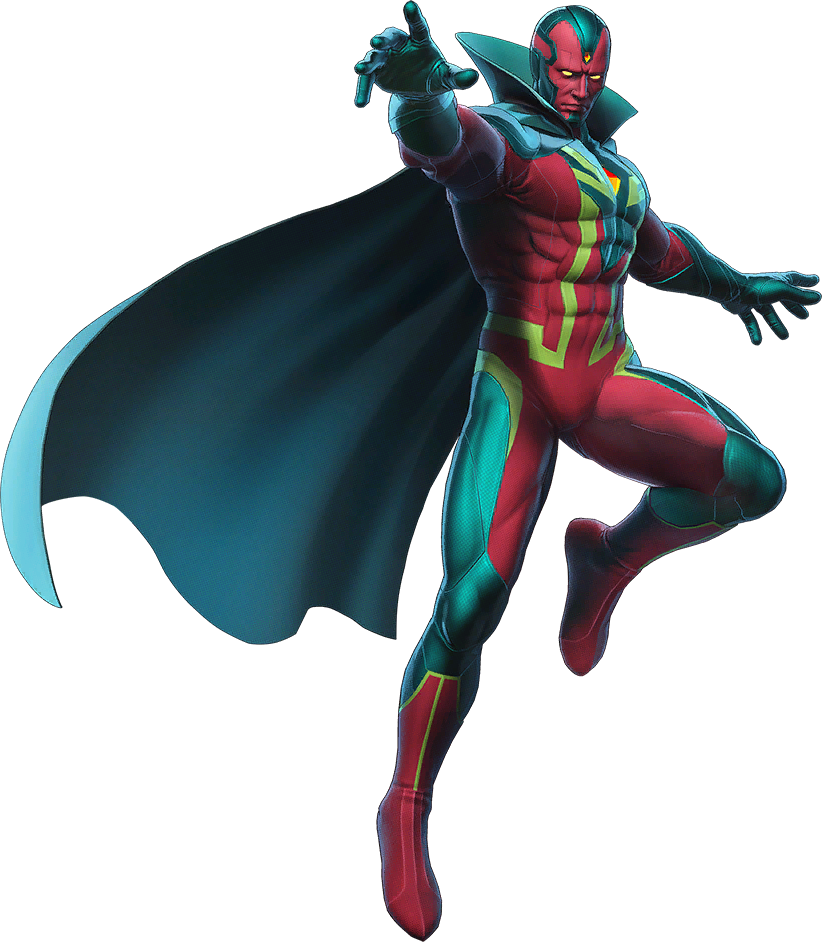 Another NPC and longtime Avengers member not included as a playable character in Marvel Ultimate Alliance 3 is Vision. Vision is involved in the Avengers Tower portion of the MUA3 story mode but doesn’t join the Alliance after assisting them in their battle against Ultron and Ultimo.

As an artificial life-form/android called a synthezoid, Vision’s powers include flight, superhuman strength, agility and durability and analytical abilities (as well as the capacity to process information and perform computations with superhuman speed and accuracy).

In addition, Vision can fire energy beams from the Solar Jewel on his head and change his density — which ranges from a ghostly intangibility to a state of solidity ten times greater than depleted uranium (which grants him a diamond-esque near invulnerability, amplifies his strength and makes him immovable).

One Special Ability I’d look forward to most in Vision would be going intangible, thrusting a hand into an enemy and then rematerializing it — a maneuver Vision calls “physical disruption.” 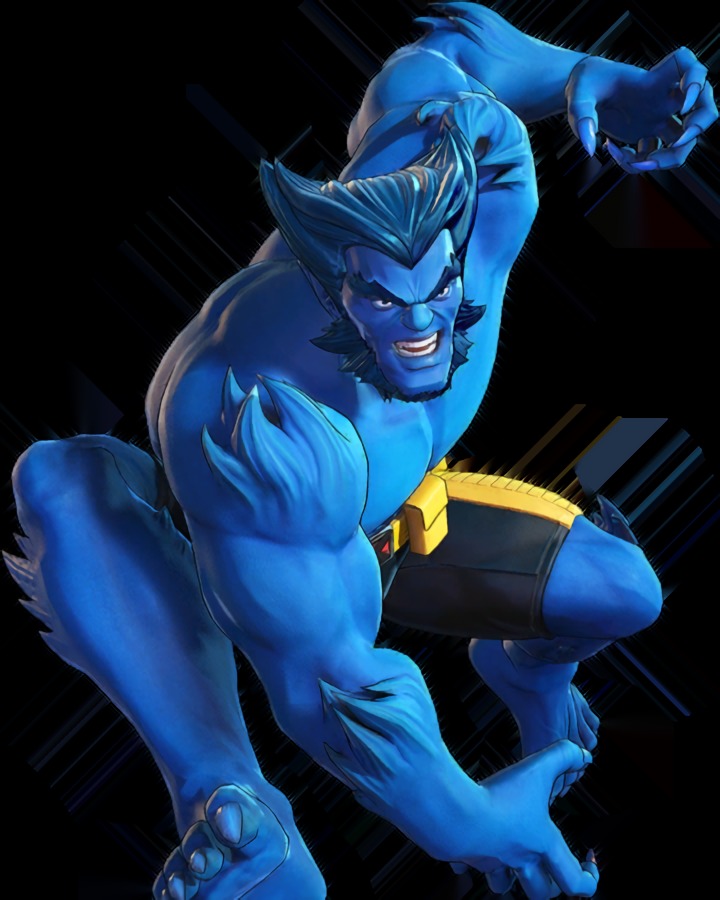 Although he lends his name to the Beast’s Bountiful Bonuses rewards and adds color commentary for the Danger Room mode, Dr. Henry McCoy AKA Beast never leaps his way onto the Alliance as a playable character.

Which is a shame, considering Beast was one of my favorite heroes in the X-Men Legends games. Despite his blue-furred, animalistic appearance, Beast possesses a genius-level intellect and it doesn’t take a research scientist to realize that Beast’s particular blend of acrobatics and technological know-how would make him a compelling addition to any squad in Marvel Ultimate Alliance 3. 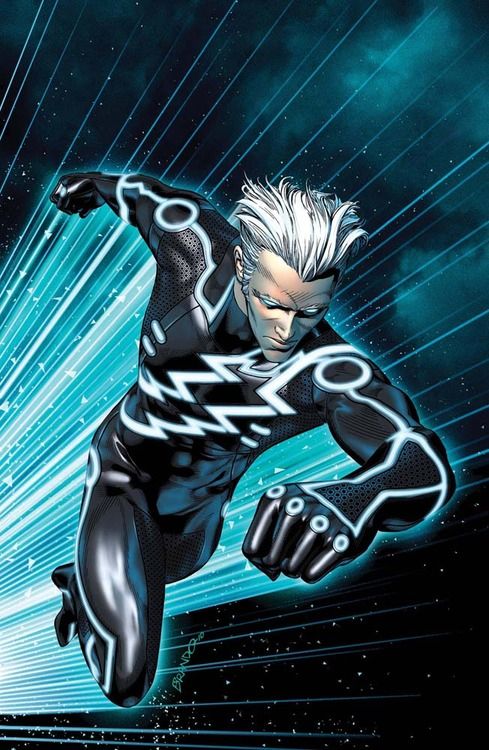 Super-speed is a superpower that would add an insanely fun and novel element to Marvel Ultimate Alliance 3 and Piotr Maximoff, AKA Quicksilver is one of the fastest superheroes in the Marvel Universe.

Just imagine speed-runs to the end of a level in a Danger Zone session with Quicksilver. That being said, super-speed has the potential to be imbalanced in-game, so it’d have to be implemented fairly. 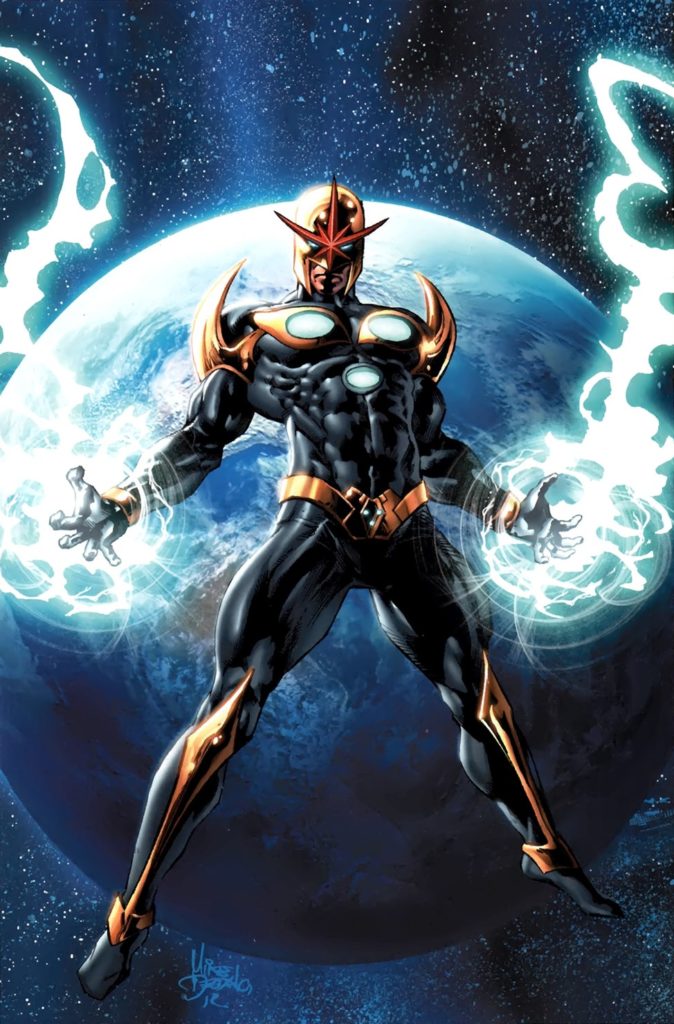 Imbued with the power of the Nova Force, Nova is the champion of Xandar and protector of the universe. Nova’s powers include flight (moving faster than the speed of light), super-strength and energy projection. Although this skill kit would make him nearly identical to Captain Marvel, there are a few interesting abilities Nova possesses which could set him apart:

The Worldmind: The Worldmind is the collective knowledge of Xandarian culture which Nova can tap into like a supercomputer; using the Worldmind, Nova can download profiles of enemies of which he knows little about, hack into highly secured computer networks or access cumulative information from thousands upon thousands of years for advice. 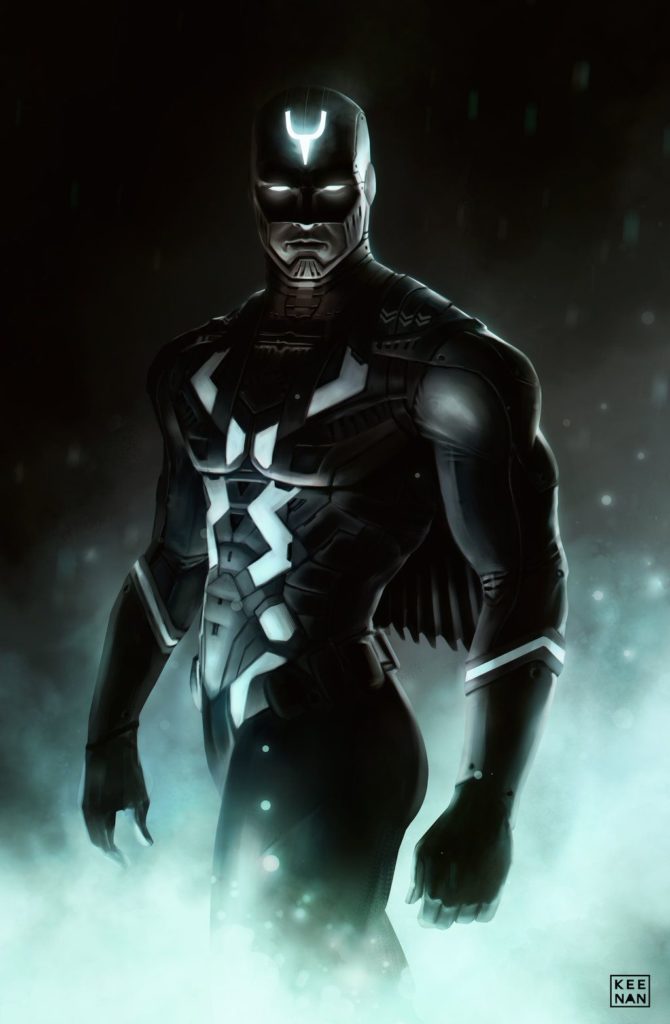 On top of superhuman strength, speed, durability, stamina, agility, flight and reflexes thanks to his Terrigen-mutated Inhuman physique, the King of the Inhuman’s most notable claim to fame is his quasi-sonic scream — which is so powerful it’s said his slightest whisper can level a mountain.

Black Bolt may be a lesser known character in the Marvel Universe but he’s hung with the likes of the Incredible Hulk, Namor, Thor, Apocalypse, Nova and the Thing: proof that he’s in the upper echelon of Marvel powerhouses.

I can imagine unleashing a full-force sonic scream and clearing a room full of trash mobs or narrowing the focus of the screech in a way that’s strong enough to rip chunks of flesh off Thanos himself. 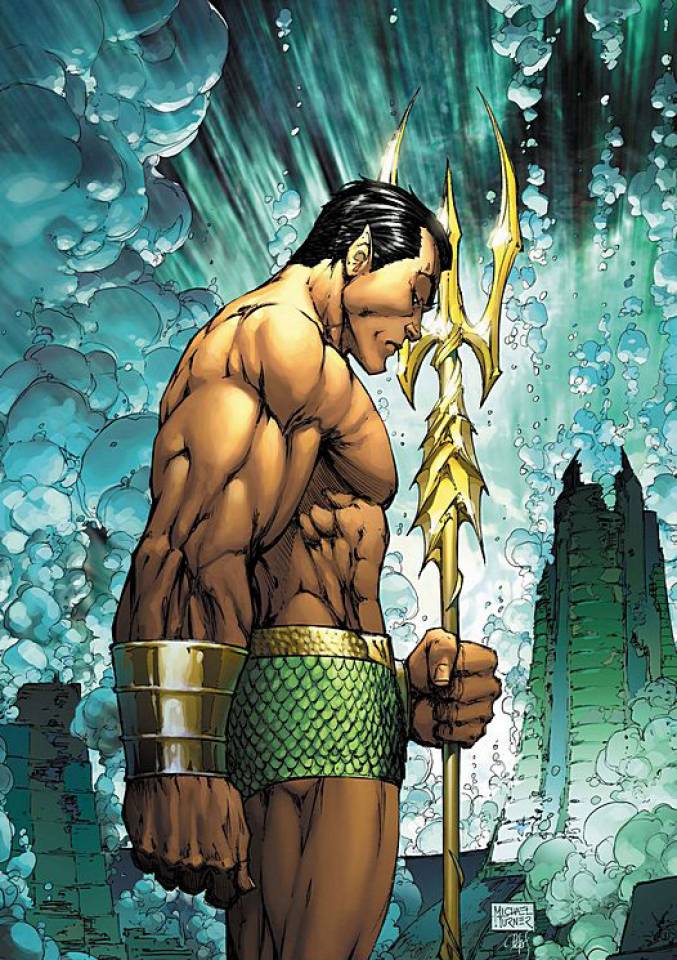 Namor, the Sub-Mariner is not only the Marvel Universe’s first superhero (he first appeared alongside Human Torch in Marvels #1 from 1939), he’s also one of its most impressive.

Namor possesses powers which are the result of his unique background; as a mutant born of a human sea captain and a princess of the legendary underwater kingdom of Atlantis, Namor is both Homo mermanus and Homo superior.

In addition to a superhuman physiology (superhuman strength, speed, stamina, reflexes and durability), Namor is an expert combatant and capable of flight — but his most remarkable abilities are tied to the sea. Or under the sea, that is. When submerged in water, Namor’s physical capabilities and senses are amplified considerably — he’s one of Marvel’s strongest superheroes in his fully hydrated state; he can also communicate telepathically with sea creatures, navigate via electrolocation, exhibits aquatic healing and even has a limited scope of hydrokinetic powers. And let’s not forget Namor’s Trident of Neptune, his legendary three-pronged weapon forged from enchanted adamantine-metal.

I have faith Team Ninja could dive deep both into Namor’s physical capabilities and aquatic based skill kit. Although that brings up one of Namor’s few weaknesses: the longer he’s away from water, the more Namor’s physical attributes decline. Would Namor have to renew his powers through some sort of water-based synergy to remain in top form?

Formerly Norrin Radd of the planet Zenn-La, Radd sacrificed himself to become a herald of the planet-devouring entity known as Galactus in order to spare his world.

Gifted with the Power Cosmic (whose main powers include indeterminate superhuman strength, speed, durability, matter rearrangement and energy projection powerful enough to create shields, black holes or even destroy planets), Radd became the Silver Surfer, a metal-skinned humanoid with control over a surfboard capable of transporting him faster than the speed of light.

Surfer made an appearance in the first Marvel Ultimate Alliance game as an unlockable hidden character, an angle Team Ninja would probably have to use again as Surfer is too powerful a character to be used extensively. Surfer abilities included the prerequisite Cosmic Beam, Silver Dash (a Charge move), Power Surge (a radial blast of cosmic energy).

Some more unique abilities in Surfer’s kit I’d want to see included again were his Slow Time boost, which slowed all enemies; a potent Heal which healed allies (considerably stronger than Dr. Strange and Scarlet Witch’s healing abilities in MUA3) and an XTreme attack called Galactic Might, which not only dealt heavy damage but restored the party’s Health and Energy as well. 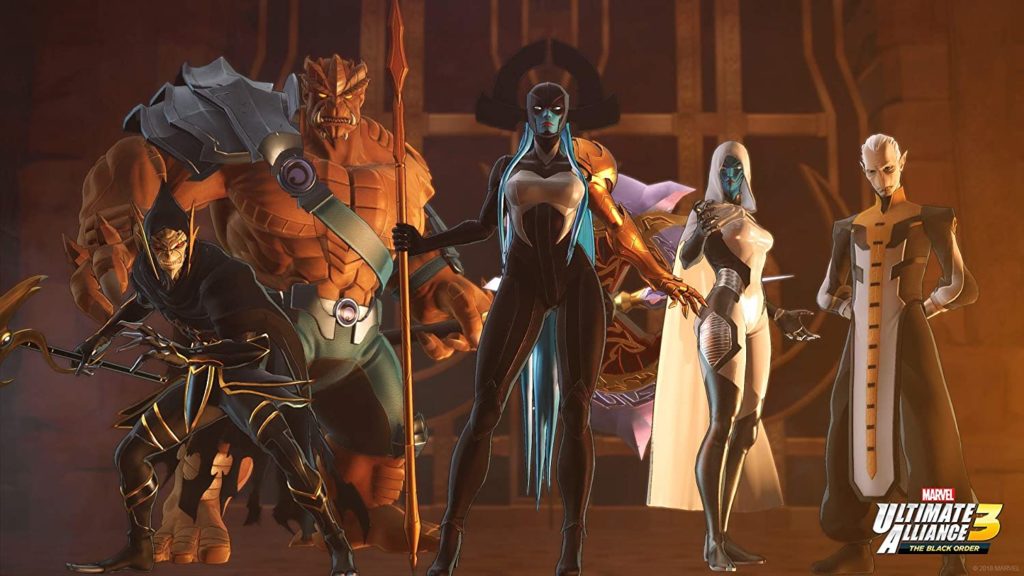 Marvel Ultimate Alliance 3 is host to two Thanoses but there’s always the strange feeling that he seems a little out of place fighting alongside the likes of Captain America, Thor and Iron Man. That’s where The Black Order, Thanos’ elite team comprised of Corvus Glaive, Proxima Midnight, Ebony Maw, Supergiant and Cull Obsidian come into play.

The prospect of storming into a level with Thanos as field commander with his vicious generals brings with it an air of unmatched evil authority. Some special abilities I’d look forward to most include unleashing rapid-fire attacks with Corvus Glaive’s trademark glaive; sending enemies into a state of confusion with Supergiant; and summoning vicious droves of Outriders with Proxima Midnight. (I’d have to imagine playing as Corvus Glaive and Proxima together would unlock some sort of destructive, evil power couple synergy too.)

Marvel Ultimate Alliance 3 characters I purposely left off the list

The following are Marvel Ultimate Alliance 3 characters that would make fun additions to the main roster but whose projected playstyles have been represented well enough already by characters that are already playable selections. 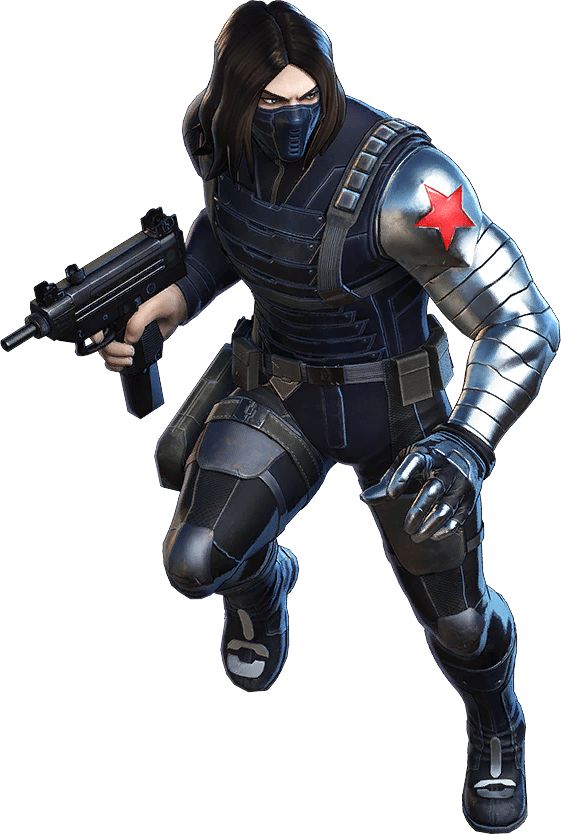 Although Winter Soldier helps the Alliance combat the forces of A.I.M. in Wakanda and would admittedly make a bad-ass addition to the team, his skill kit would be too similar to what we’ve already seen from myriad other characters in the game.

Jessica Jones makes a cameo in Marvel Ultimate Alliance 3 on a rooftop prior to the Shadowland portion of Story mode, but doesn’t join her fellow Defenders (Daredevil, Iron Fist and Luke Cage) as a selectable character.

Although her popular and critically-acclaimed Netflix series and her passionate relationship with Luke Cage make Jessica a more-than-attractive option as an inclusion in Marvel Ultimate Alliance 3, her skill kit (super-strength, durability and flight) is a bit redundant compared to what many other playable characters already offer in-game.

Which of the above characters do you think would make the best addition to Marvel Ultimate Alliance 3? Do you agree or disagree with my choices? Let me know in the comments.

Want to see the list of the best characters in the game? Check out our Marvel Ultimate Alliance 3 Character Tier List.