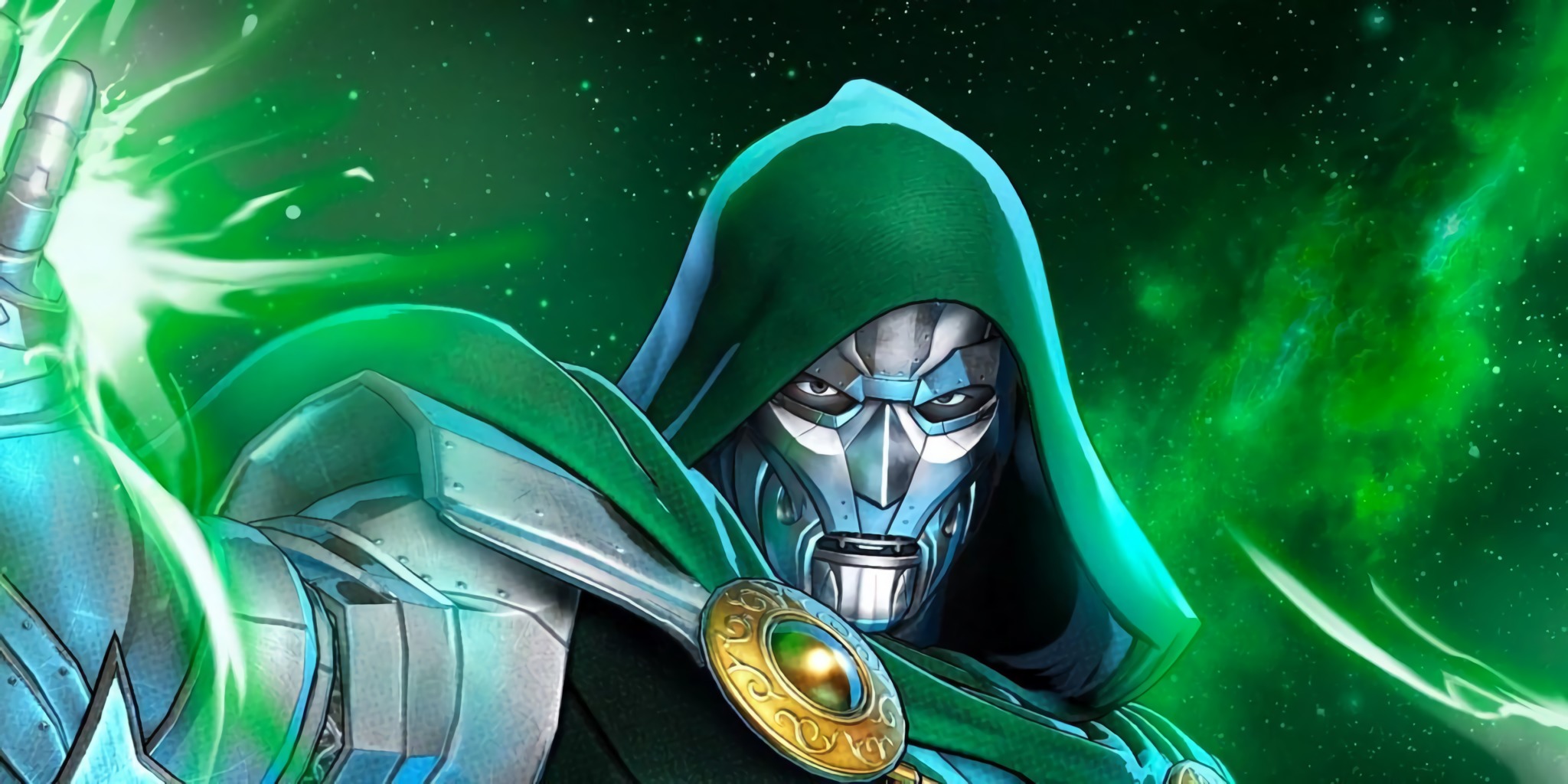 Marvel Ultimate Alliance 3: The Black Order’s third and (presumably) final expansion, Shadow of Doom brings the Fantastic Four and of course, Victor Von Doom himself, Dr. Doom into the mix.

Before you can play as the Fantastic Four or Doom however, you’ll have to complete the all-new story content, which brings players racing from Wakanda to the Negative Zone to Latveria, the country Doom rules with an (literal) iron fist.

If you’re having trouble making your way to Castle Doom, keep getting curbed by a Celestial or discomfited by Doom himself, let our Marvel Ultimate Alliance 3: Shadow of Doom guide save the day. 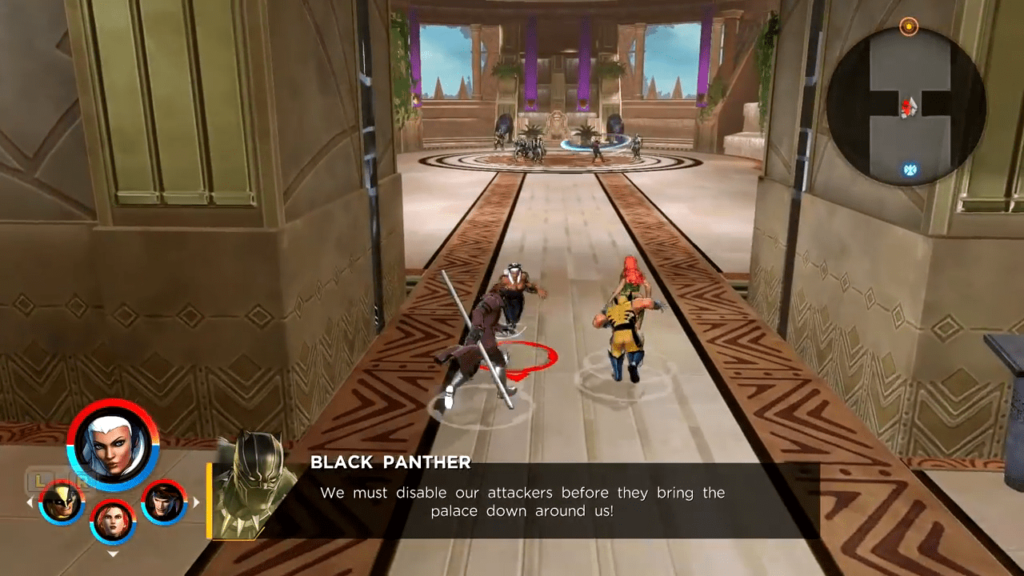 Wakanda is under attack!

After an epic cinematic which shows the crux of the Marvel Ultimate Alliance 3 roster coming together when a transmission from Black Panther goes awry, the first part of the epilogue brings players back to T’Challa’s palace.

Dr. Doom has laid siege to the city, seeking to plunder the Power Stone from its safeguard deep in the Catacombs. Doom has posted a number of Doombots (his robot replicas) throughout the Palace Corridor, Ancient Catacombs and Sacred Passage to prevent heroes from reaching him.

RetTips: A teleporter like Cable, Deadpool or Nightcrawler make this objective easy mode as you can bypass nearly all Doombots on your way to Doom.

If not, your second best options are Moon Knight (who can glide his way to the finish), any of the web-slingers or a superhero with the Flight trait.

Here you’ll battle Dr. Doom for the Soul Stone. Doom has the ability to teleport, float, fire homing missiles and smash the ground to send shockwaves in four different directions. 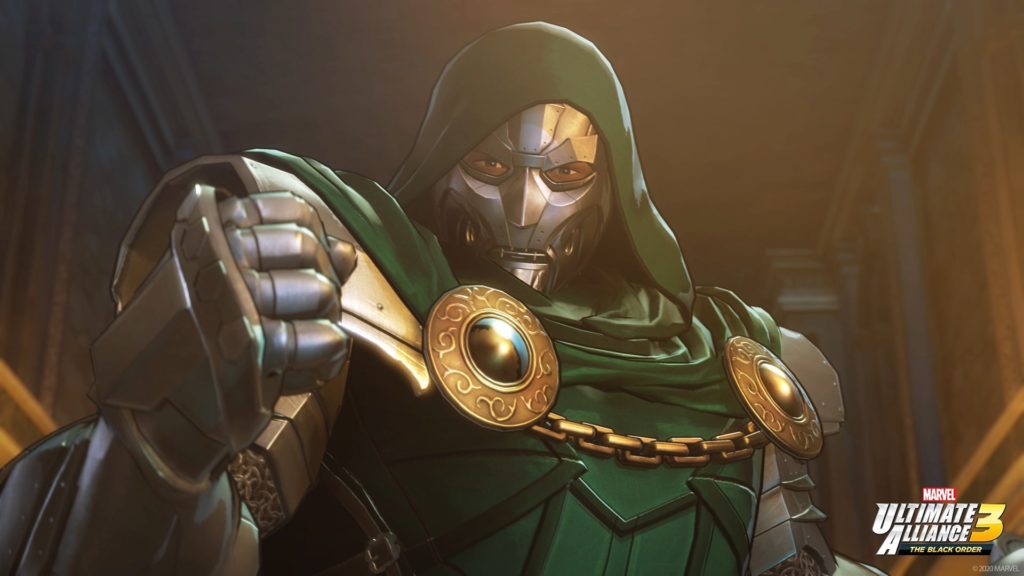 RetTips: At some point during the battle, Doom will encase himself in a yellow force field while he and his Doombots fire green energy beams in all directions. This force field can only be broken by the Ricochet synergy (Barrage + Rapid Fire) or later in the fight, Explosive + Burst; keep this in mind with your team configuration going into the fight. 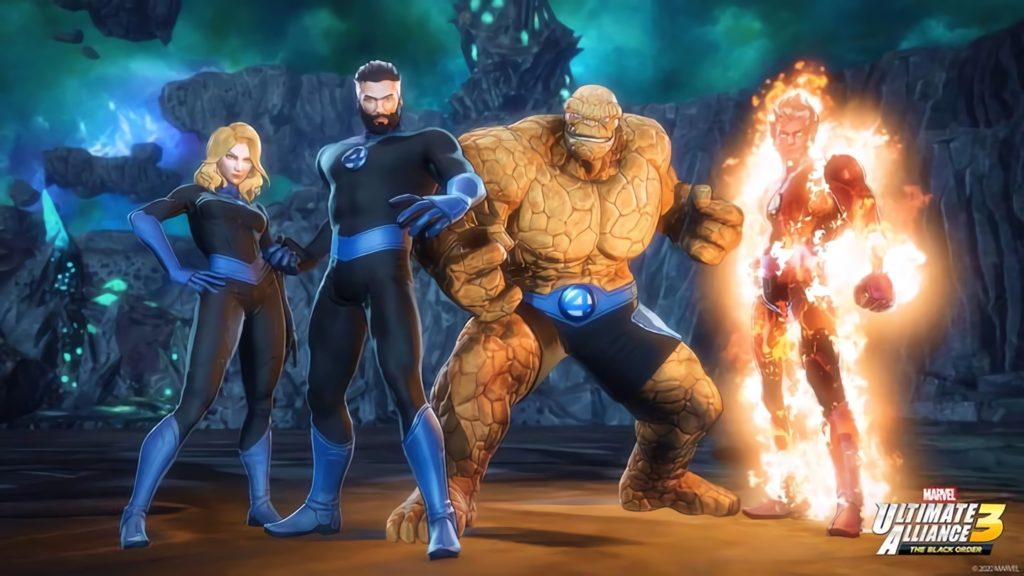 At the conclusion of their battle, Dr. Doom teleports the heroes to the Negative Zone. Your overall objective here will be to journey to the inter-dimensional bridge; first you’ll have to battle a slew of Insectoids on your way to meeting with the Fantastic Four.

There are two types of Insectoid mobs: smaller green ones which resemble the Zerg from Starcraft and bulkier, beetle/crustacean ones that have a healthy amount of Hit Points, swing massive claws, spit green pools of poison and have enough size to pin you against walls or other enemies if you’re not careful.

You’ll encounter purple crystal clusters you can destroy whose fragments can be used to prevent the Insectoids from regaining health from pools of yellow amber. Pick up the purple orbs and throw them towards the yellow amber puddles to offset their healing effect.

If you become confused on the map in this section, look for steps leading upwards embedded into the purple rock walls; they often are the way out of seeming dead-ends. 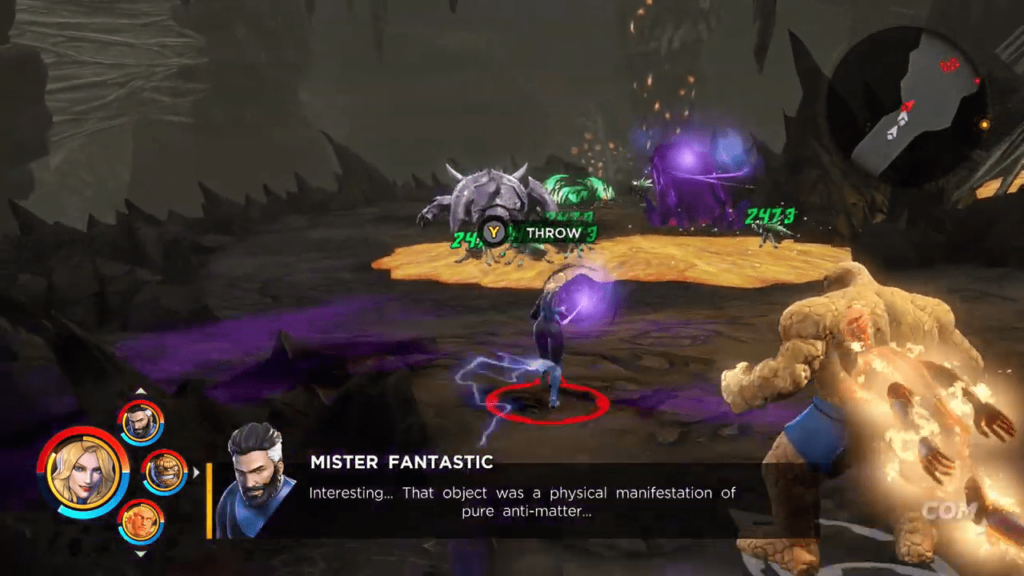 As the objective implies, players must defeat a total of 60 Insectoids.

Make sure to destroy the purple crystals and use their fragments to ensure killing Insectoids as efficiently as possible in this objective.

Annihilus, holder of the Cosmic Rod, commander of the Insectoid horde and ruler of the Negative Zone is a hard hitting boss with a grab and slam ability and a penchant for summoning Insectoid reinforcements.

Halfway through the fight, Annihilus will regroup and add the ability to fly off-screen to his repertoire; from the air he can drop down in an area of effect stomp on players. He also has the ability to fire a yellow beam which inflicts heavy damage. 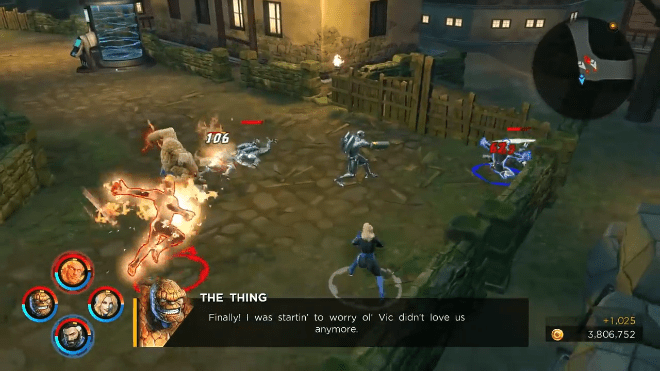 On the way to Castle Doom, bulkier Doombots will appear with more Hit Points, Stagger bars, heavy attacks and Shoulder Charge attacks that can knock heroes down.

Make sure to destroy Teleportals or Doombot reinforcements will continue to appear indefinitely.

RetTips: On two different occasions you’ll have to traverse a bridge riddled with swarms of Ion Drones who emit grids of red lasers. These lasers can be difficult to jump over as the drones’ lasers will flicker on and off and the speed at which they emit them will vary.

The best heroes to have in your party here: 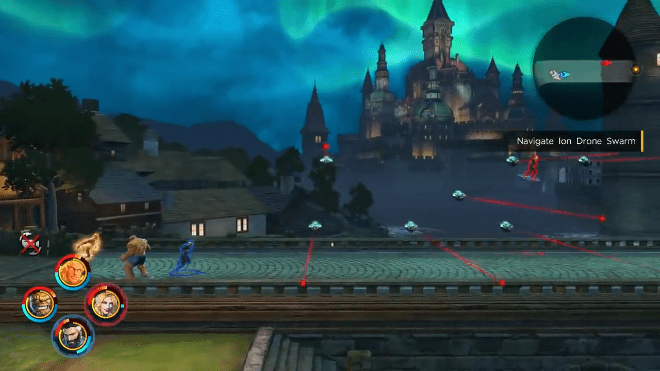 The upgraded Doombots from this point will come in two varieties: ones with missiles fitted to their backs who can run, deliver combo melee attacks and jet-pack hover in the air while firing their missiles. Upon defeating them the missiles will be dropped; they can be picked up and thrown at enemies. Much like Sentinel cores, these do substantial damage so be sure to grab them when dropped.

Another form of upgraded Doombot wears a green tunic and can deliver a Shoulder Charge attack that can knock down heroes. Much like the real Doom, this Doombot also has the ability to discharge a Shock attack from its fingers.

And now, we come to the section of the game that has caused more frustration for players than any other. The dreaded, rage-inducing…

On three different occasions, you’ll round the corner en route to Castle Doom and encounter the fragmented body of a Celestial reassembling itself.

On these pathways the Celestial will unleash a pattern of attacks that will intensify each time, consisting of explosions and lasers with knockback and electrically charged attacks which can paralyze your character.

These can be very disconcerting (and painful) to traverse by conventional means, i.e., dodge and jump spamming with a character. Much like the laser grid drones though, if you have the correct Marvel Ultimate Alliance superhero in your group, these sequences will go by a lot more smoothly. 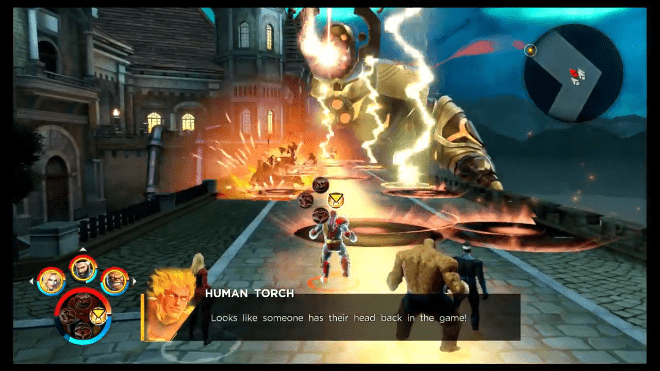 The characters you’ll want to include:

Try to stick to the left side of the wall as you’ll be able to more easily duck into the vestibule of the Castle Doom entryway when you do.

After you make your way through the Celestial Gauntlet three times you’ll face the fully reconstituted Celestial when you next see him. During this fight the Celestial will attack you from the water while various Doombot and Insectoid mobs rush you on the bridge.

To defeat the Celestial you’ll have to pay attention to two things and you’ll achieve victory without a hitch:

After you defeat a missile-equipped Doombot which drops a missile, pick it up as quickly as possible and throw it in the Celestial’s direction to deplete his Stagger bar. The same purple orbs you used to negate the Insectoid’s healing amber will drop during the fight; when the Celestial emanates rainbow-colored energy and attempts to heal himself, lob a purple orb at it to disrupt the effect.

Once you defeat the Celestial you’ll finally be able to storm Doom’s castle.

Make your way through the hallways and use the same strategy against Doombots that you employed before, making sure to destroy Teleportals to hinder the flow of Doombot reinforcements.

Once you reach the top of the Castle you’ll be ready for the final boss battle of Marvel Ultimate Alliance 3: Shadow of Doom’s story content: God Emperor Doom. 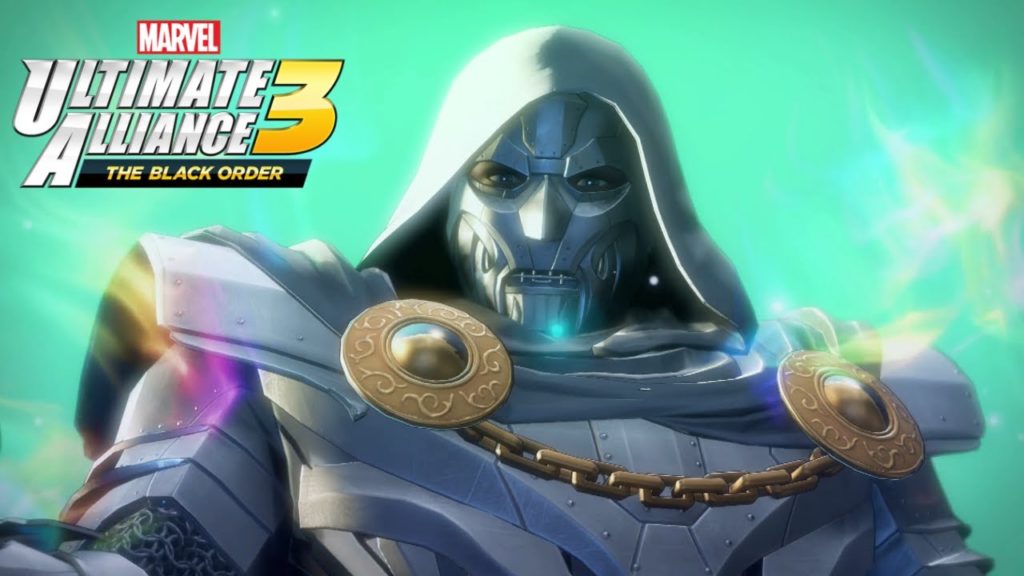 This fight will play out similarly to the first time you fought Doom in the Catacombs of Wakanda except Doom has added some tricks to his arsenal thanks to the power of the Infinity Stone.

The most disorienting will be when Doom summons energy-duplicates of the Avengers (Captain America, Iron Man, Thor and Hulk) to attack your team. Once these duplicates are defeated they’ll shrink down to luminous spheres of energy that remain on the ground throughout the fight; if you step on one of the spheres, the energy duplicate will be resummoned at full health, so be mindful of your positioning and character placement during this segment of the fight.

We hope this walkthrough helped you complete the Marvel Ultimate Alliance 3 Shadow of Doom content; if we left anything out or you still need help in an area we didn’t cover, give us a shout in the comments section.