Lord Alexei Barov, the owner of Scholomance (and the island on which Scholomance is located) is the latest Paladin and Warrior Legendary in upcoming Hearthstone expansion, Scholomance Academy. Barov was formerly the eleventh boss off the World of Warcraft Scholomance dungeon before he was implemented into the game as one of its first Death Knights alongside Baron Rivendare. 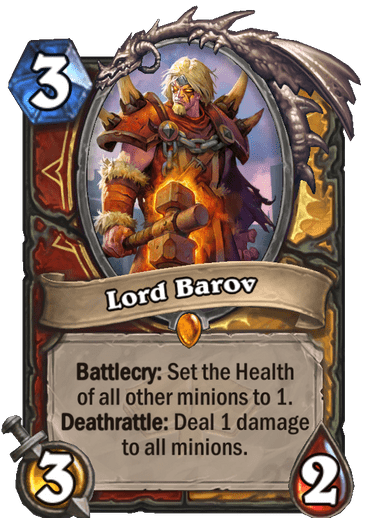 Alexei Barov stayed at Scholomance despite leasing it to Kel’Thuzad. He says it’s for “supervision.”

Battlecry: Set the Health of all other minions to 1. Deathrattle: Deal 1 damage to all minions.

Lord Barov is a 3-mana-cost minion with 3 Attack and 2 Health, with a Battlecry which sets the Health of all other minions to 1. He also has a Deathrattle effect which deals 1 damage to all minions, giving him a powerful Equality and Whirlwind effect rolled into one card.

What do you think of Lord Barov, the latest Paladin and Warrior Legendary minion in Hearthstone Scholomance Academy? Let us know in the comments.