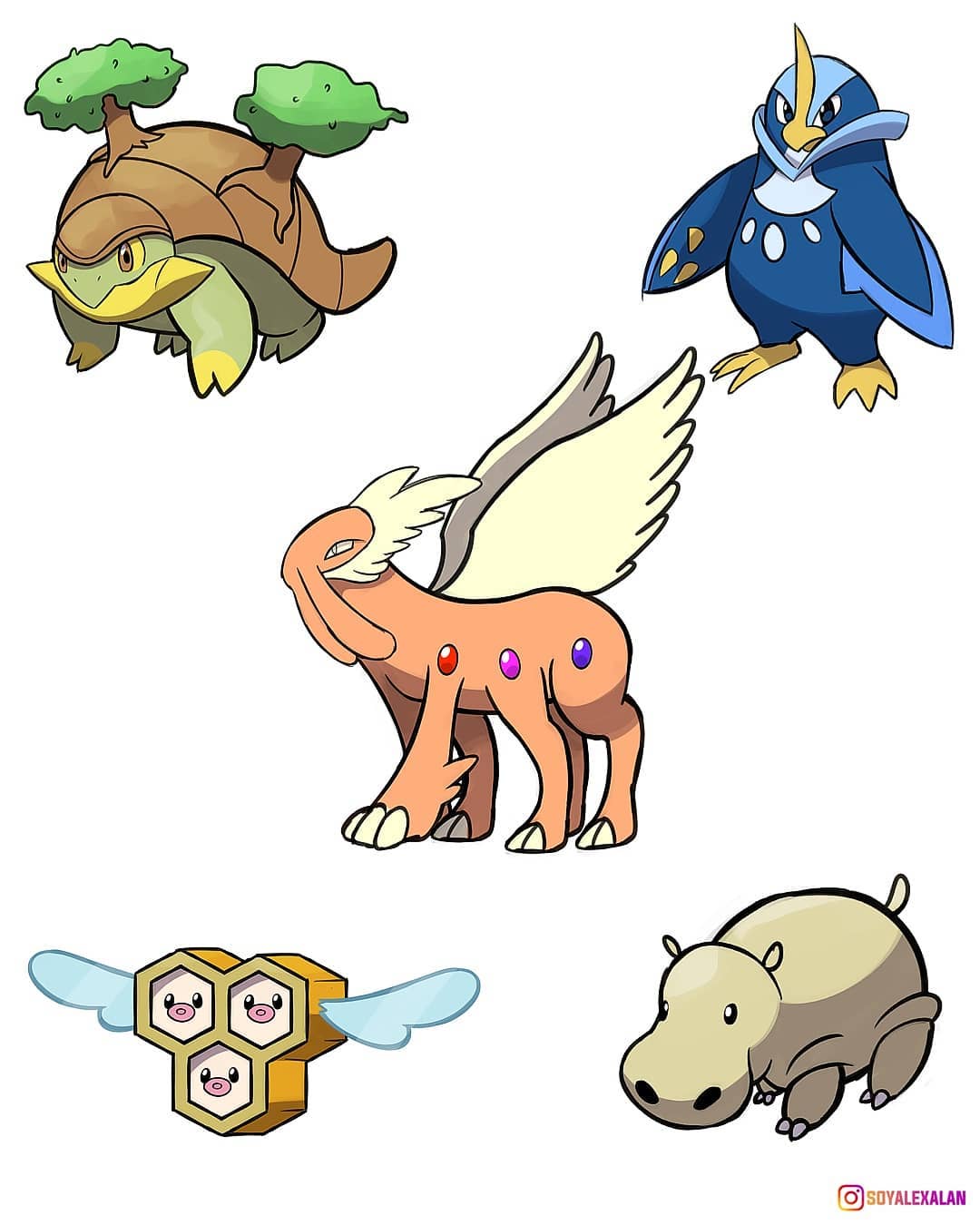 As you might’ve guessed from my Pokemon Gold and Silver beta sprites piece, Pokemon beta sprite leaks get me pretty hype; not only do they grant better insight into the developmental process of the game — but they’re oftentimes hilarious peeks at placeholder sprites for well-established Pokemon like Garchomp, Darkrai and Arceus before the game is finalized.

Lucky for myself, and other gamers out there who like to peek under the hood of iconic video games, another Nintendo source code exposé took place recently. The leak was first posted to 4chan last weekend and subsequently nicknamed the “Gigaleak” by the gaming community. Among source code and asset leaks for the Game Boy, Super NES and N64 games such as F-Zero, Mario, Mario Kart and Zelda were some interesting sprite leaks from Pokemon, particularly Pokemon Diamond and Pearl.

The following are some of my favorite beta sprites from the Pokemon Diamond and Pearl leaks. 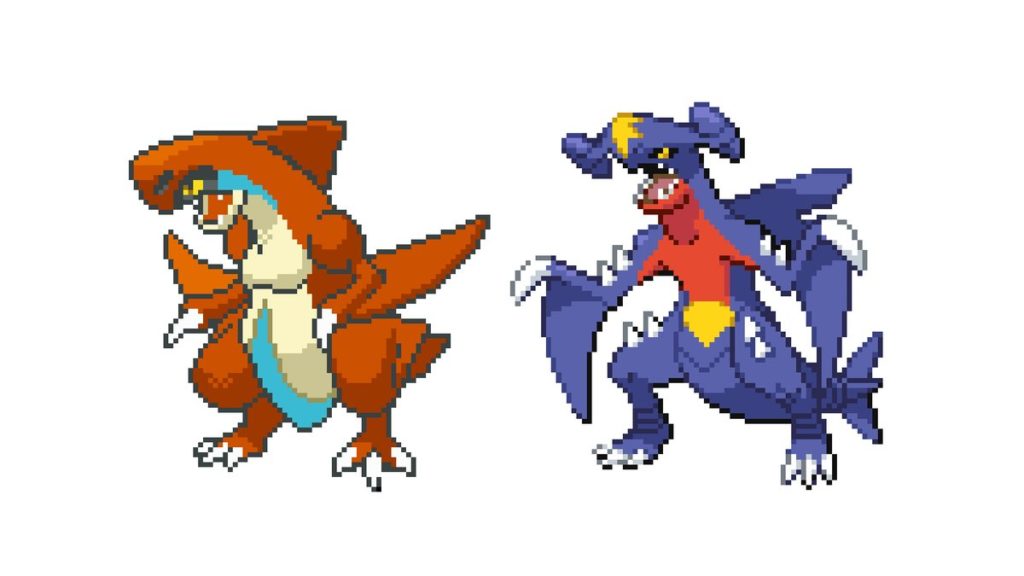 Yes, technically he’s a Ground/Dragon Pokemon, a type combination which, in cohesion with its amazing stats has made Garchomp one of the most feared, pseudo-legendary physical attackers in the entire Pokemon series. But one look at Garchomp, with its hammerhead shark face, sickle-shaped dragon wings and caudal-fin-having tail and it’s pretty apparent: there be a Shark Dragon.

Interestingly enough, the beta Garchomp line, including pre-evolutions Gible and Gabite (Gible evolves into Gabite at Level 24; Gabite into Garchomp at 48), bears even more resemblance to a shark in the Pokemon Diamond and Pearl leaks.

Here’s Gible, a pudgy-looking, quadrupedal manta ray looking thing (on the left) next to the final version of Gible. While final Gible is cooler, beta Gible has an ugly-cute charm going for it. And it looks like the lovechild of a Larvitar and the first fish to ever walk on land in prehistoric times — I dig it. 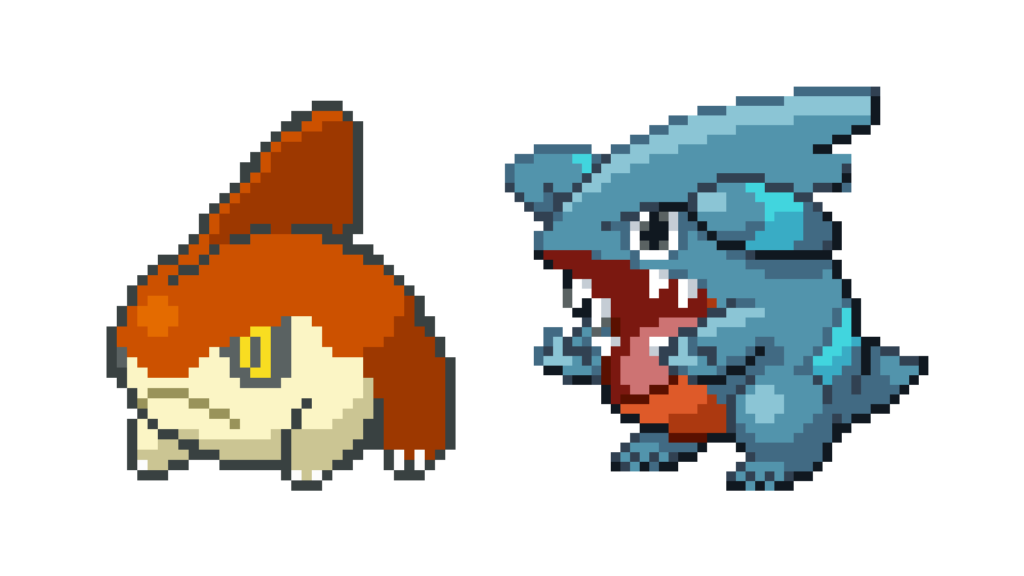 Beta Gabite retains its four-legged posture and perturbed-looking frown but gains a vestigial-looking tail and a longer neck. Shark dog anyone? 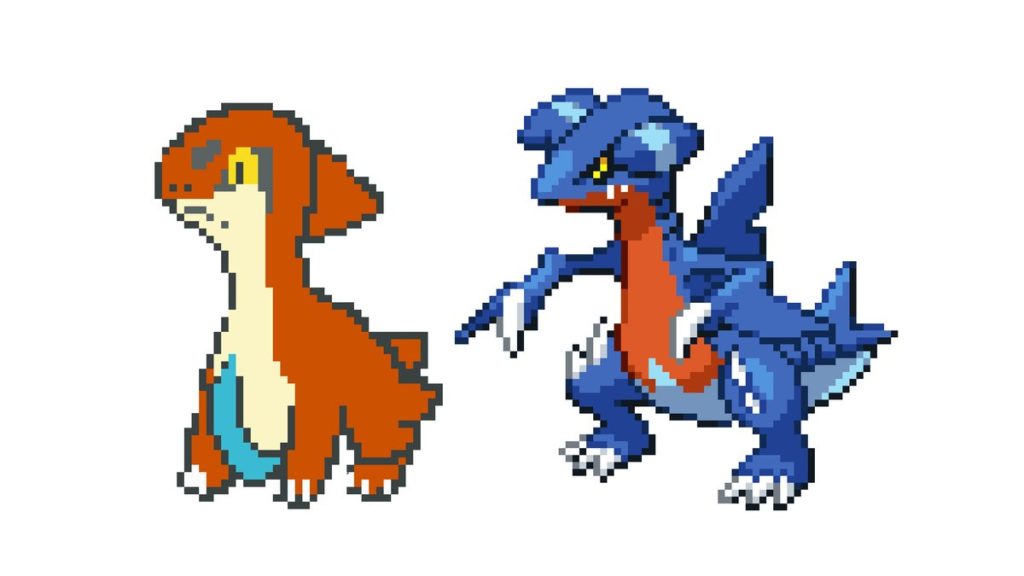 Honestly, I like the way the beta Garchomp line looks. It’s a little plainer and less refined than the finished version, but still not bad. The final version of Garchomp is a bit more menacing thanks to his horns, color scheme and scythe-sharp tail — but I wouldn’t mind seeing beta Garchomp serve as a Water/Dragon regional version somewhere down the line.

Here’s a look at the differences in the Torterra line, the starting Grass Pokemon from Pokemon Diamond and Pearl. Turtwig, the first evolution is unchanged but Grotle and Torterra have some pretty noticeable variances in their design.

Pictured below is beta Grotle (left) and final Grotle side-by-side. Beta Grotle’s armor-plating is a different color; the trees are less bush-like and situated differently; and it has smaller feet and eyes. 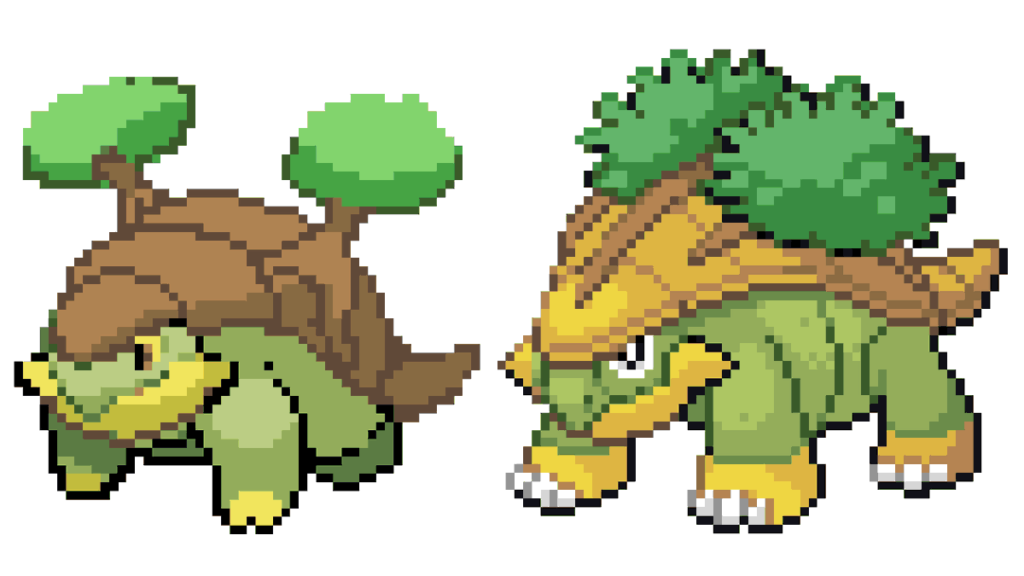 And here’s a side-by-side of beta Torterra and the final one. 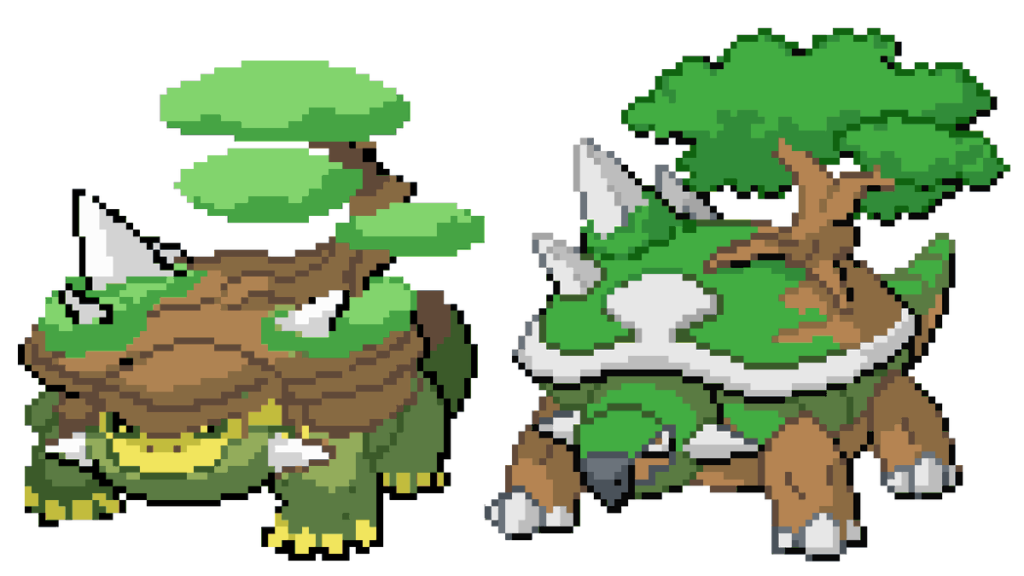 Beta Torterra exudes a bulky, Venusaur-ish appeal but I can see why Game Freak went with the final version. Final Torterra looks more unique (presumably to differentiate it from the aforementioned Grass-starter, Venusaur), crisply-colored and more like an arboreal Ankylosaur/snapping turtle with its angular black beak. 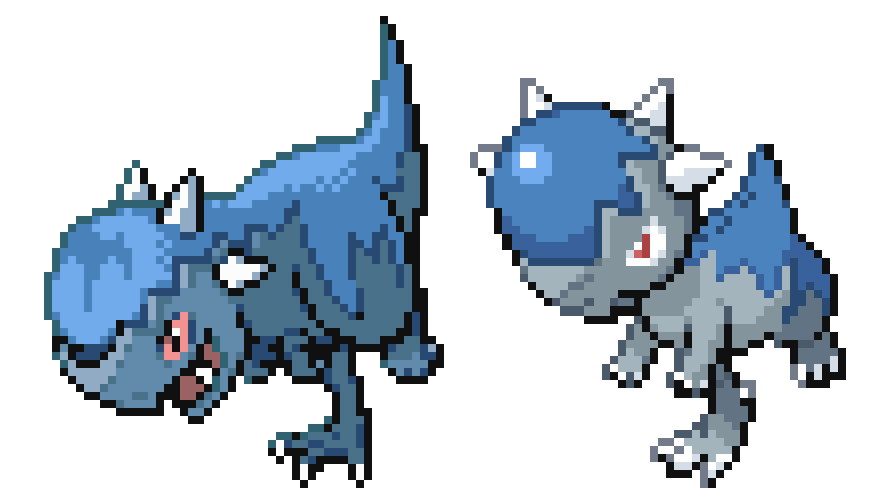 Rampardos is a Rock-type Pokemon introduced in Generation IV whose appearance is based on those thick-skulled dinosaurs who rammed headfirst into each other like bipedal, bighorn sheep. (They’re called Pachycephalosaurus in case you were wondering or are part of our targeted “Pokemon fan who’s simultaneously going for their paleontology degree” Retbit reader demographic.)

RELATED:  15 of the best Pokemon in Brilliant Diamond and Shining Pearl, non-Legendary 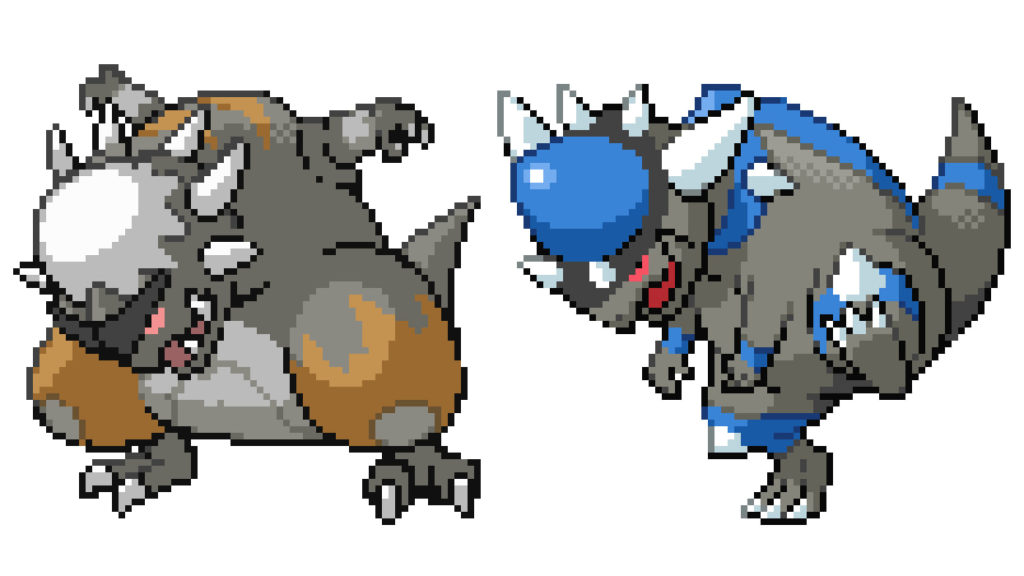 Back in Pokemon Diamond and Pearl beta though, Rampardos was even thicker. Like dummy thicc. That applied to Rampardos’ beta pre-evolution too. Besides having a darker skin tone and completely red eyes, beta Cranidos also had more slender, prehensile, bird-like talons. And of course, those extra thick thighs. 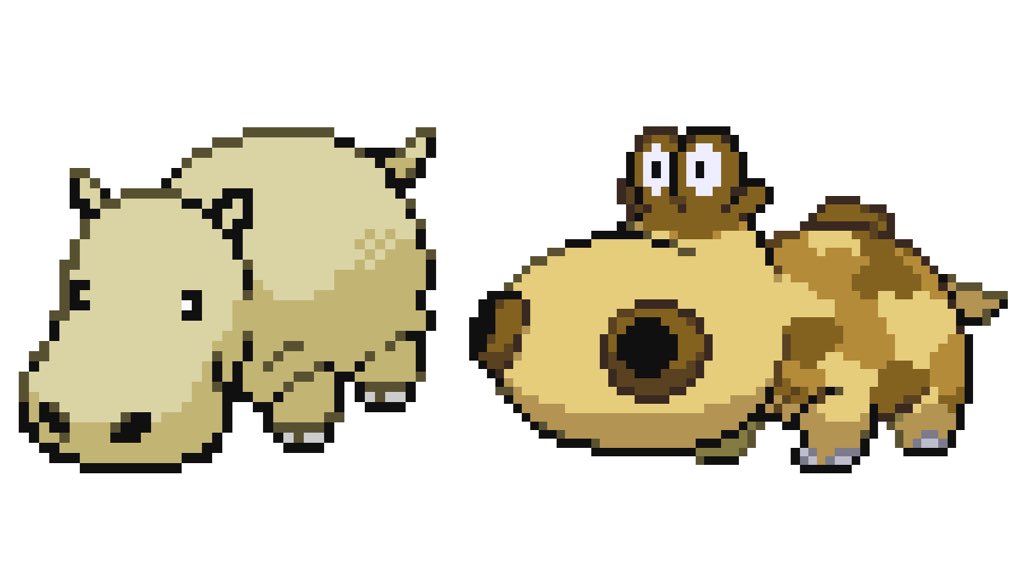 Is that even a Pokemon or simply a baby hippo? In all seriousness though, it’s not hard to see why they changed the look of beta Hippopotas, as it’s a little too much like the real thing. 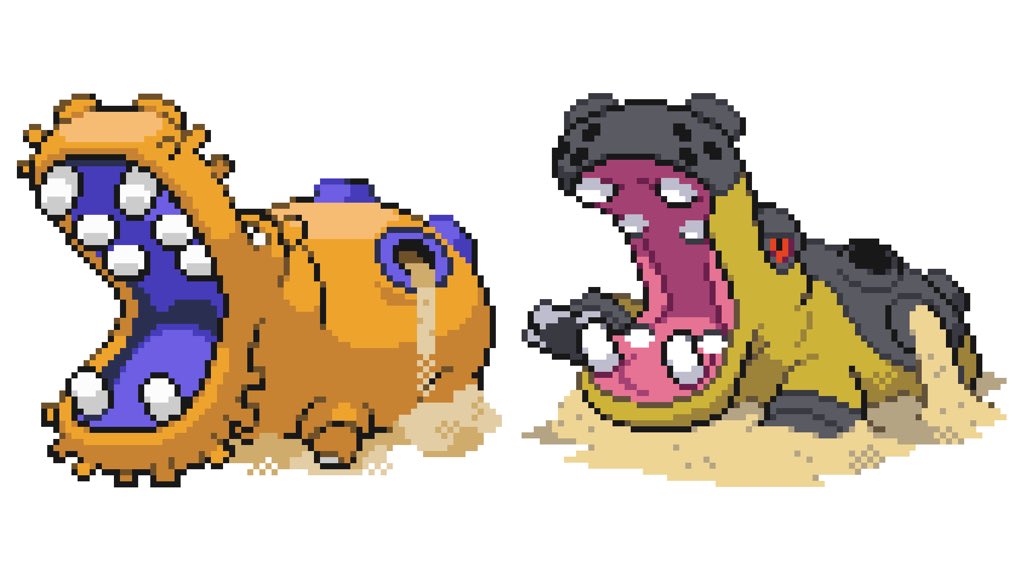 And while the beta version of Hippowdon isn’t drastically different from the finished one, the color scheme of the finished version fits a lot better, making Hippowdon look both more dangerous and like a constituent of the desert sand in which it resides. 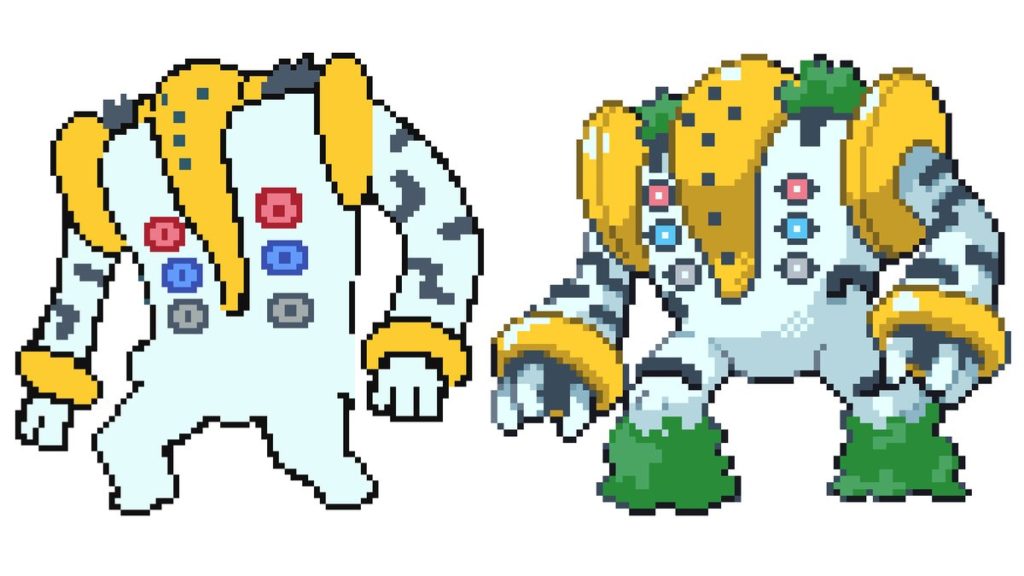 According to the Pokemon Diamond and Pearl PokeDex entry for Regigigas, “There is an enduring legend that states this Pokémon towed continents with ropes.”

Beta Regigigas on the other hand looks like a whole, wet napkin that couldn’t make it up the rope climb in gym class. 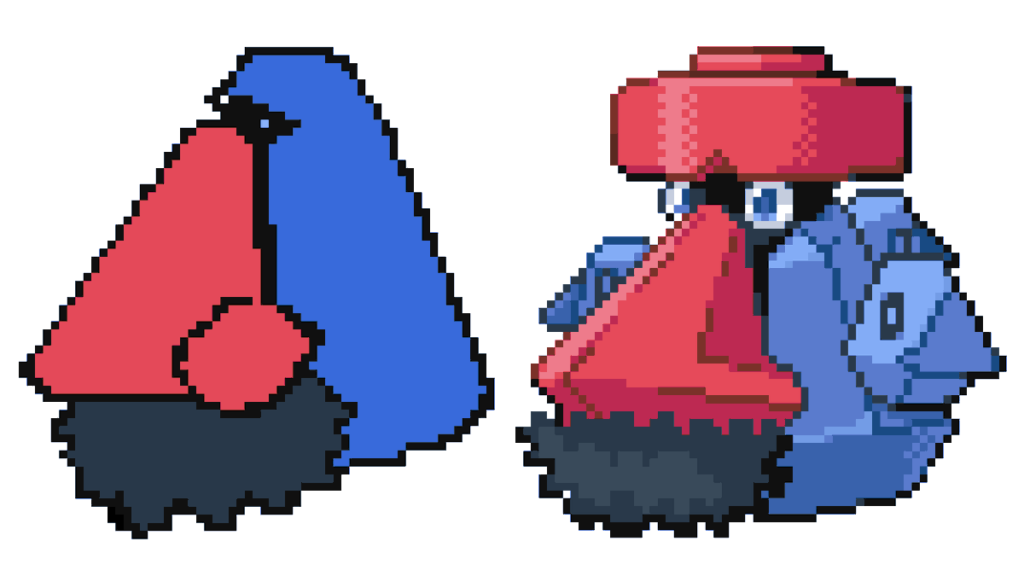 I wonder: If beta Probopass could talk would he sound like the late, great Don Rickles?

Well, that one on the left doesn’t look like something named Togekiss, does it?

While beta Togekiss looks like a Fairy/Flying war machine, it’s not very congruous with its Togetic and Togepi pre-evolutions. Could’ve made for a pretty cool standalone Pokemon, though. 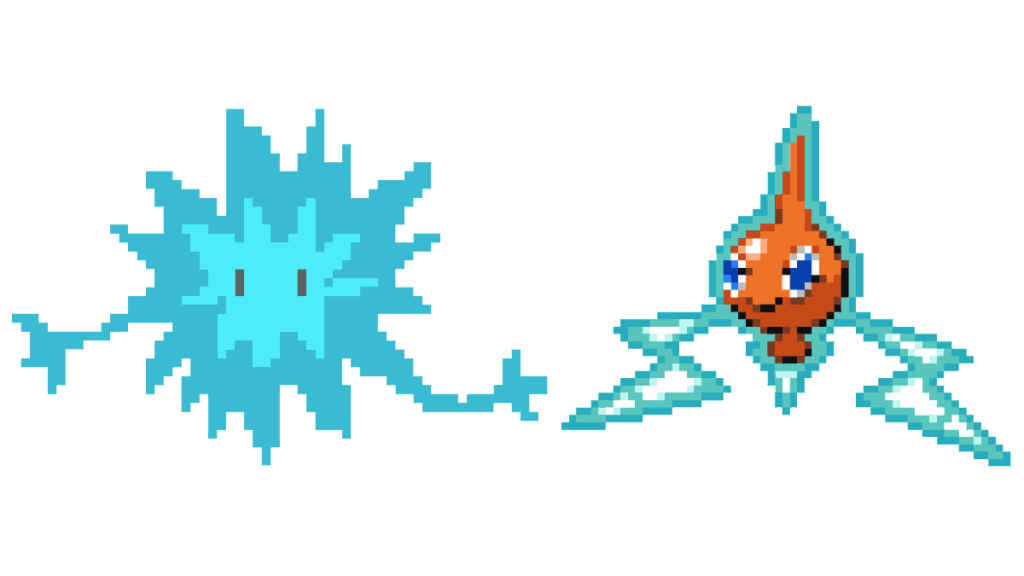 At first glance, Beta Rotom might seem like the most rudimentary Electric-Ghost type sprite you could think of. And sure, while it’s not on par with some of the more sublime Sugimori designs from Gen. 1, or as good as the final version of Rotom — is it really a lower effort design than say, a pile of toxic waste with eyes and a mouth or a sentient ice cream cone (not knocking either Pokemon, as I love both Muk and Vanillite)?

Beta Rotom is low-effort and about as conspicuous a placeholder as it gets. But something about that electric blue glow and extreme, minimalist design gives the little sparkling guy some charm — as electron-sized that charm might be. 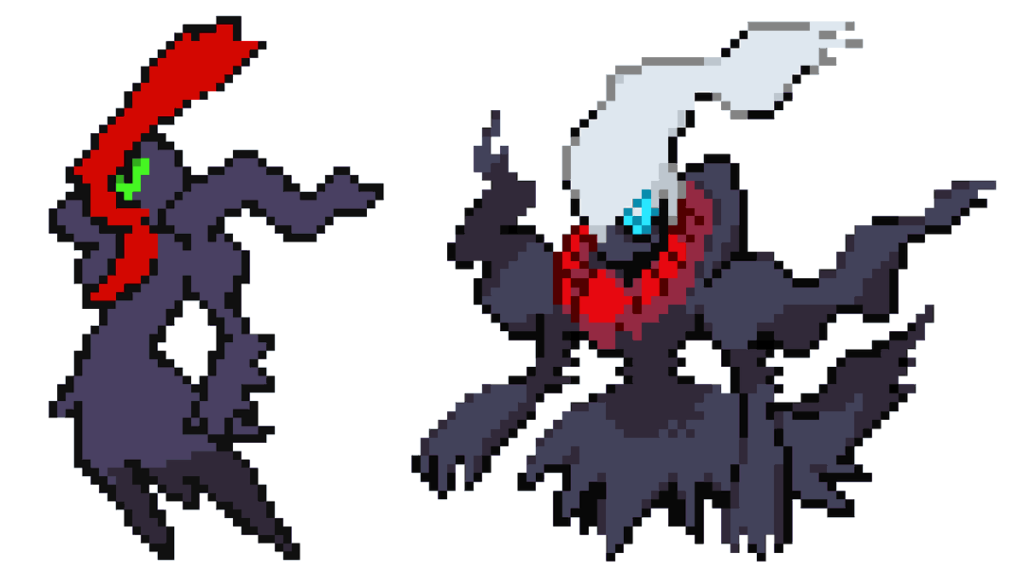 Beta Darkai looks like a naked version of final Darkai.

And apparently the logo from the 2007 Japanese animated film, Pokemon: The Rise of Darkrai instituted the beta version of Darkrai’s red crest in its logo.

In the recent Gen 4 beta sprite leak, Darkrai's early design was somewhat rooster-like. Darkrai ultimately got revised into a more nightmarish Pokemon, but his early design still ended up getting used for the logo of the 2007 movie "The Rise of Darkrai." pic.twitter.com/N3DSipLU8l

That rooster comment in that Dr. Lava tweet? Here it is, actualized by Hayley McNab. Warning, once you see it, you won’t be able to unsee.

First time I saw Beta Darkrai this was all that I could think about. Truly the rooster of nightmares. #betapokemon pic.twitter.com/spSm0esREA 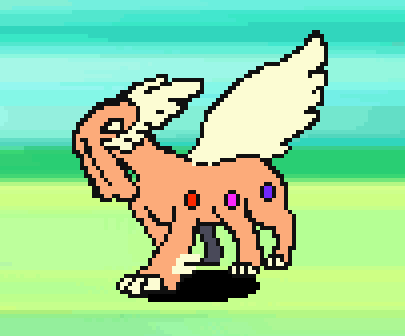 Apparently, this Chthulu-faced pentaped was the beta precursor to Giratina, the Ghost/Dragon Legendary. Giratina, with its ethereal black wings and regal, golden horns and armor ringlets is one of my favorite Pokemon designs, so I’m glad Game Freak went with Giratina’s final design over this beta placeholder.

Notwithstanding, Kimairan (whose name is presumably derived from the word chimera, an amalgamated creature with a lion’s head, goat’s body and snake’s tail in Greek mythology) could’ve made for a serviceable Pokemon design. As I already mentioned, it has the face of an eldritch god. Instead of golden armor plating, it has a crest of yellow hair circling its head and a gryphon wing for a tail.

Perhaps the most impressive and inscrutable element of Kimairan’s design, though? Are those… Infinity Stones from Avengers: Infinity War and Endgame lining its side!? Do you know how powerful Kimairan would have to be to just have those sticking out of its side like they’re no more than some rebellious teenager’s body piercings? Are we to assume it has the other three gems lining the opposite side of its body? Or that Kimairan is laughing in the face of an offscreen Thanos?

Kimairan’s Pearl PokeDex entry confirmed: “Dread it. Run from it. Destiny arrives all the same. And now it’s here. Or should I say, I am.”

Kimairan’s Diamond PokeDex entry: “You’re strong, but I could snap my talons and you’d all cease to exist.”

Or maybe Kimairan is actually the desiccated-looking form of a Giratina who tried to use the Infinity Stones, nearly killing it and physically deforming it in the process like it did to Thanos?

Whatever the case, maybe we should be happy that Kimairan never made it into the final version of the game and is instead locked away in the digital void where it can never get us. 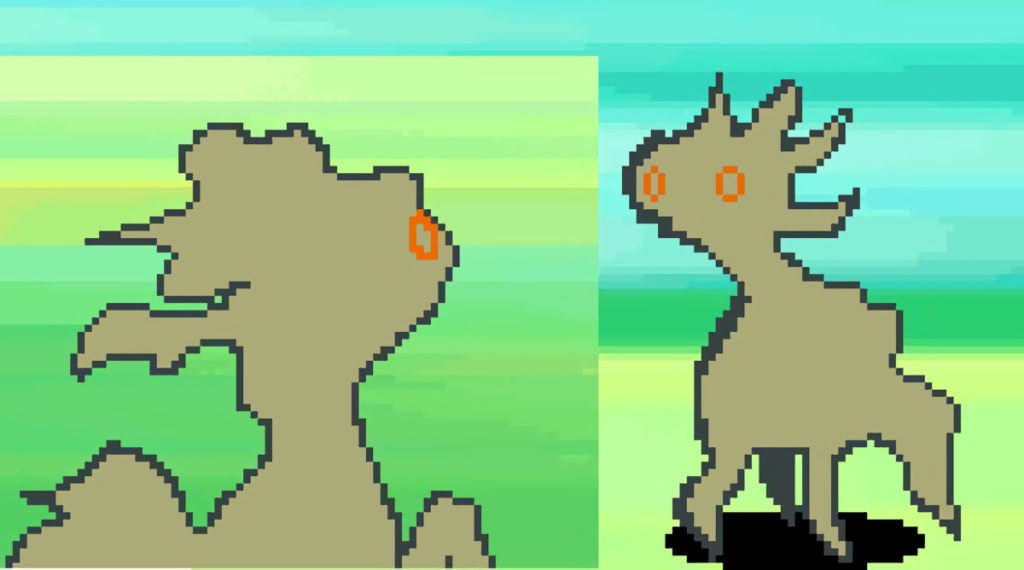 Speaking of locked away in the digital void, here’s Arceus, the god and creator of all Pokemon and the Pokemon universe as we know it.

Beta Arceus has become something of an internet phenomenon because while compared to its final version, beta Arceus is just a smog-colored, scribbled-looking, extremely rudimentary-looking design, especially for “The Original One” who emerged from an egg and shaped the Pokemon world… maybe that’s exactly the sort of mysterious, unsettling, unfathomable appearance that would actually make a lot more sense.

Would a primordial god really look like an elaborate, striated, armored, llama stuck in a fence like the finished version? Or the amorphous, ethereal and terrifying beta version? I’m going with the latter. I leave you with this alarming perspective on beta Arceus:

Y'know, in the right circumstances, I think Beta Arceus could be genuinely terrifying… pic.twitter.com/FSS7r32d46

For a look at all the unreleased sprite comparisons from the Pokemon Diamond and Pearl beta leaks, check out this video from Mixeli.

Which unreleased sprite from the Pokemon Diamond and Pearl beta leaks were your favorite? Which one are you glad didn’t make it into the final version of the game? Let us know in the comments.

In this article:pokemon diamond and pearl

Good news, fellow Sinnoh fans (and those of you who were overall disappointed with Sword and Shield) — Pokemon Diamond and Pearl remakes for...