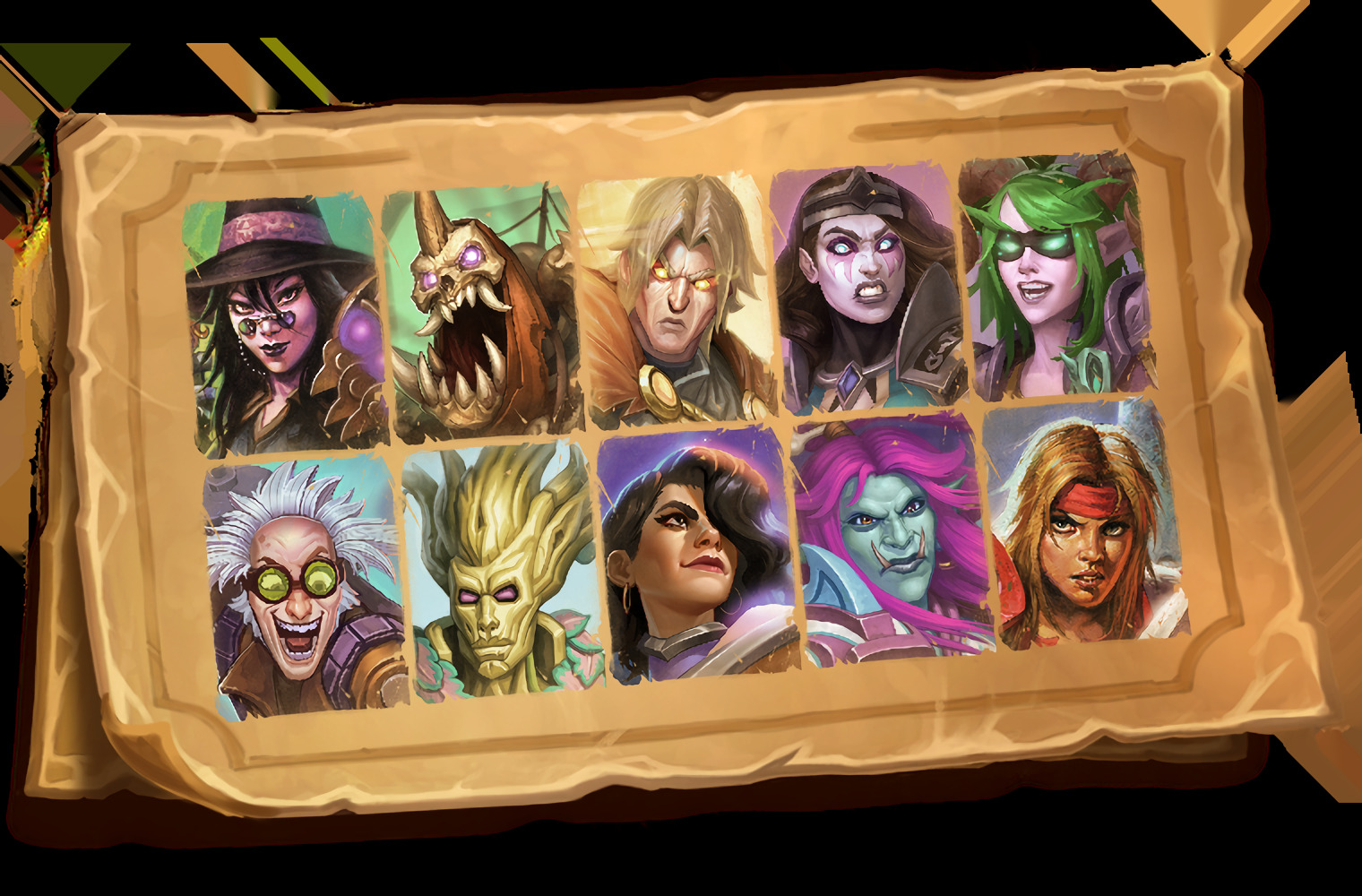 In case you couldn’t tell from my Hearthstone Book of Heroes walkthroughs or my fan-made solo adventures like Return to Un’Goro, I’m a big fan of Hearthstone’s solo content.

Which is why I was overjoyed to have been granted beta access to the brand-new Hearthstone Duels game mode, a combination of solo Hearthstone endeavors like Dungeon Run and Monster Hunt with real, live player vs. player match-ups. Hearthstone Duels has consumed the entirety of my Hearthstone playtime for the past few weeks.

Here’s a quick at what to expect from all the Heroes in Hearthstone’s Wizard Duels as well as some basic, preliminary decks to use on your first run-throughs if you’re still getting acclimated.

Mage is the strongest class overall as of this writing in Hearthstone Wizard Duels; this is on account of a capable core selection of cards with which to start your run; a favorable Hero Power in “Wyrm Bolt,” which makes it very easy for Mozaki to establish board control with a slew of spell-hungry Mana Wyrms and Treasures throughout the run which greatly benefit from spell-slinging.

This starting deck mixes useful Mage spells with Spell Power and an Acidic Swamp Ooze to stymie some of the other top Duels classes which benefit from Weapon use, such as Demon Hunter and Rogue. If you’re not feeling Acidic Swamp Ooze in your deck, feel free to replace it with an Arcane Intellect.

Rattlegore may not have seen much play as a Legendary Warrior minion in the Scholomance Academy expansion but the bone golem is a bonafide stud in Hearthstone Duels.

Rattlegore utilizes deadly Weapons in Death’s Bite and Reaper’s Scythe as well as Enrage minions and a starting Treasure which synergize insanely well with its Hero Power, “No Guts, No Glory.” The following starting deck is optimized to start you off strong in the early rounds and capitalize on the aforementioned strengths. Also, Rattlegore’s Hero Power + Grommash Hellscream = FOH, son.

Other viable options in this deck include Lord Barov or Doctor Krastinov. Shield of Honor is also a very useful spell in conjunction with the “No Guts, No Glory” Hero Power. 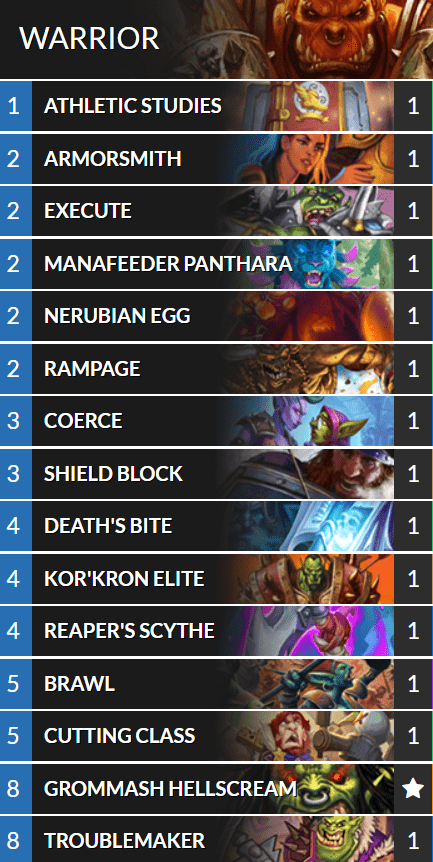 Instructor Fireheart stood heads and totems above the rest of the classes in the early Hearthstone Duels beta — so much so that she was hit with a substantial nerf in Patch 18.6.1.

As it stands, she’s still a formidable Hero thanks to her high-value Hero Power, “Totemic Power,” and the ability to win through multiple avenues, be it Weapon damage, strong Overload spells and signature Treasures or establishing board control with Evolve and Totem effects in tandem (while finishing an enemy off with Bloodlust). 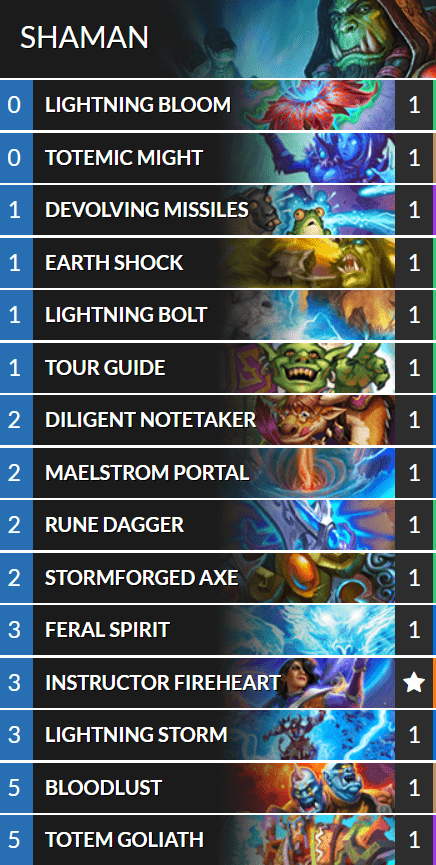 Demon Hunter was even stronger before its Treasure, “Summoning Ritual” got nerfed; pre-nerf, Summoning Ritual effectively gave Star Student Stelina the equivalent of a Guardian Animals spell (an imba Druid card which was nerfed in Patch 18.4) for 2 less mana. (The mana cost has since been increased from 4 to 5.) Not sure what Blizzard was thinking there, but to reiterate yes, Summoning Ritual has already been nerfed.

Regardless, Demon Hunter remains one of the stronger classes in Hearthstone Duels, befitting from an aggressive core deck that can be bolstered with either Soul Shard synergy, Big Demon or Weapon damage card buckets. 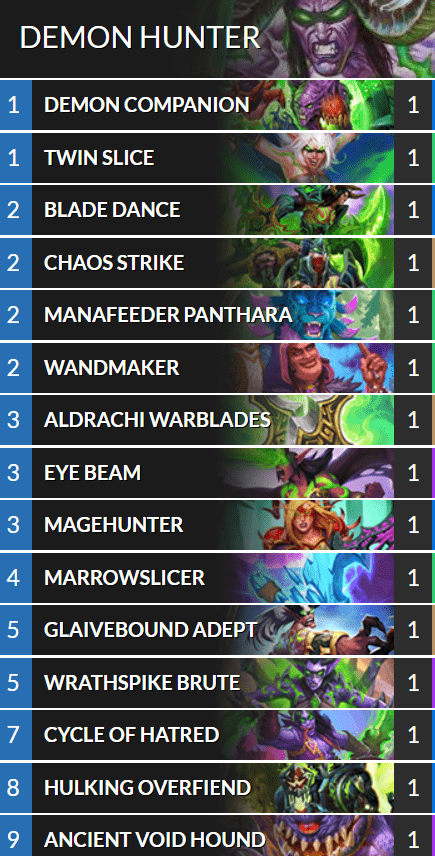 Speaking of Guardian Animals, meet Forest Warden Omu, the Druid hero in Hearthstone Wizard Duels. Due to Druid’s inherent “ramp” playstyle, this deck might take longer than some of the others in the fast-paced Duels meta; notwithstanding, the diminished size of decks means you should be able to draw your integral cards such as Lightning Bloom and Wild Growth in fairly short order.

If you don’t have Speaker Ghidra try using Mire Keeper in its place, which provides the potential for Guardian Animals on Turn 4.

Rogue, much like Warrior, is a class whose Hero Power (which was recently buffed) and first Treasure are in perfect sync. Liliana’s Hero Power only costs 1 mana now, making her especially dangerous in the early rounds when you can spam 2 Weapon damage to the enemy’s face and throughout her run if you reinforce said ability with even more Weapon buffs.

This deck starts you out with Deadly Poison, your first Treasure, “Deadly Poison 101,” weapon-buffing minion Legendary Doctor Krastinov, Cutting Class and Steeldancer — all of which take advantage of Lilian’s trusty dagger.

Lilian also has some of the coolest and narratively rich dialogue in all of Hearthstone duels. When fighting Mozaki, Master Duelist, she says, “I will fight every teacher here if I have to.” We know the feeling, Lilian.

Against Mindrender Illucia she says, “Aiding Kel’Thuzad will destroy your family!”, alluding to the downfall of the Barov family and the premise for the Scholomance, School of Necromancy instance in World of Warcraft.

It’s little interactions like these that make solo Hearthstone adventures that much more enjoyable for me. 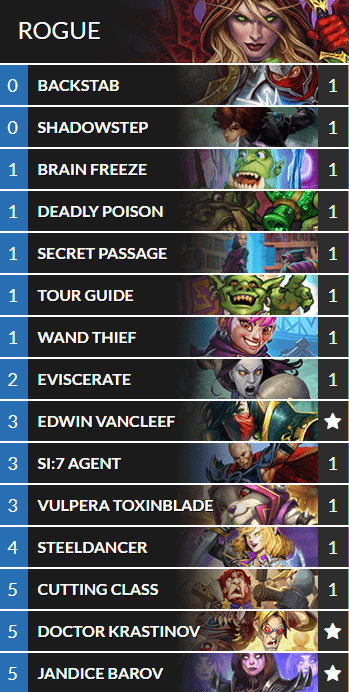 Professor Slate has the advantage of being one of the strongest classes out of the gate because of his aggressive Hero Power and playstyle, but unfortunately this benefit wanes as opposing Heroes’ health counts increase. This makes it prudent to try and build a deck that gives Slate some staying power; the best way to do this thus far is to build a Deathrattle-oriented build, which this deck core sets up with cards like Carrion Studies, Kindly Grandmother, Bloated Python and Savannah Highmane. 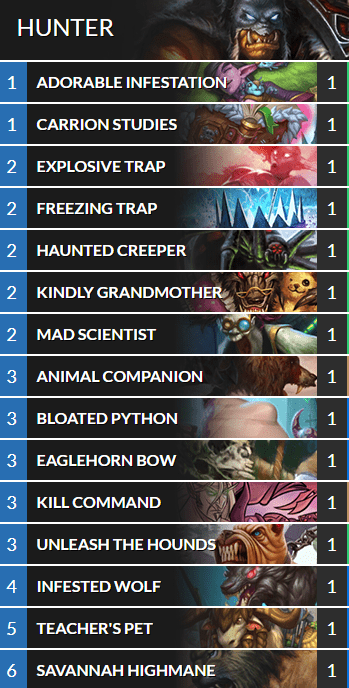 Willow’s Hero Power pretty much pigeonholes players into constructing a Discard build from the jump, which is why Malchezaar’s Imp, Boneweb Egg and Silverware Golem form the crux of her core deck.

That being said, Willow has some options as the rounds progress, such as Demons to synergize with Signature Imp (Voidwalker is a great pick for a Demon build as you can cheat out absolute units early in the game), a Soul Fragment-centric build or continuing to augment the Discard Zoo core.

Turalyon, the Tenured’s success hinges on its Hero Power, which is undeniably strong but causes Turalyon to sometimes suffer from slow-start-syndrome. Your ideal curve is to hard mulligan for Goody-Two-Shields and/or Mad Scientist in the early runnings and then cheat out Fuegen and Stalagg with Royal Greatsword for the potential to summon multiple 11/11 Thaddius minions.

Cheating out Tirion Fordring early is also an ideal scenario, but you’ll want to make sure you’ve used your Royal Greatsword all three times before Tirion’s Deathrattle effect replaces it with Ashbringer. 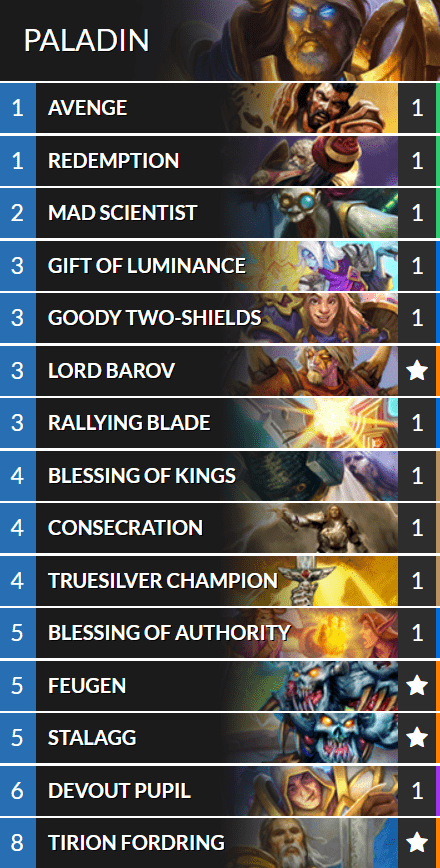 Mindrender Illucia is the Hearthstone Wizard Duels Priest Hero; her Hero Power, Shadow Mend, restores 3 Health and draws a card if the recipient of the heal is still damaged — in the early rounds, this Hero Power actually acts against Illucia, since using it can effectively burn through your 16 card deck and put you at the mercy of fatigue.

Regardless, Priest has the ability to put together strong tempo decks, utilizing either Dragon synergy or a C’thun deck with Twin Emperor Vek’lor. Unfortunately, Priest’s first signature Treasure, Fractured Spirits, might be the weakest choice out of all the Heroes thus far. 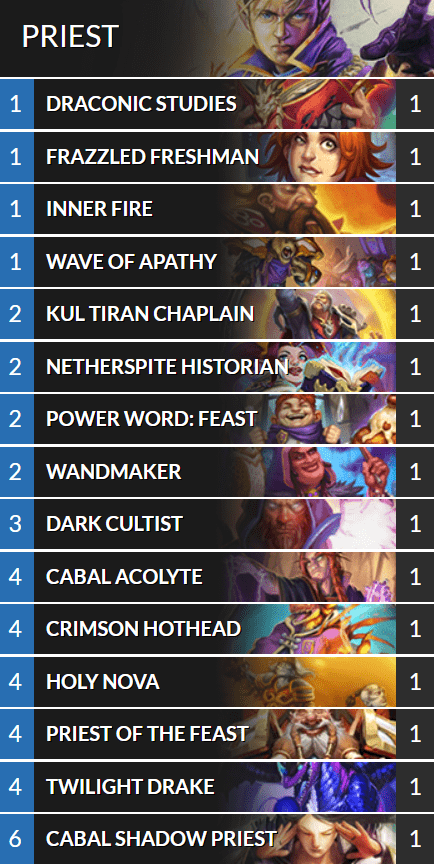 What did you think of this Hearthstone Wizard Duels heroes and deck guide? Share your thoughts, suggestions or constructive criticism in the comments section.

In this article:blizzard, Wizard Duels