Despite having a calamitous release period rampant with controversy, including Sony pulling the game from the PS Store and the glitch-laden, incomplete state of the game drawing the ire of fans, critics and even developers alike, Cyberpunk 2077 has still been selling well (particularly on Steam) and diligently plugging away at its shortcoming with hotfixes and patches.

CD Projekt Red’s latest display of commitment towards bringing Cyberpunk 2077 up to snuff has been devising a whole new website which elucidates their plans with a roadmap of future updates, improvements and DLC content and a personal statement from CDPR co-founder Marcin Iwinski, the latter of which reiterates the Polish developer’s apology surrounding the game’s release.

Iwinski added that the fault of Cyberpunk 2077‘s launch shouldn’t lie with the development team but with the management, himself included, as well as offered explanations for why the game performed so poorly from the get-go on last-generation consoles, PS4 and Xbox One.

Notwithstanding, CDPR’s main concern right now is on ameliorating the player experience with Cyberpunk 2077. “Our top priority since launch has been to fix bugs in Cyberpunk 2077. We have already released three hotfixes which have improved the game, but these are just the beginning.

Cyberpunk 2077 Patch 1.1 is slated to go live in ten days, and “will be followed by a larger, more significant update, in the weeks after. Our plans for supporting Cyberpunk 2077 in the long-term are unchanged, and we will continue to introduce updates and patches to give all players across all consoles and PCs a better experience with the game.”

Although it was originally estimated that Cyberpunk 2077 DLC content would be ready in early 2021, CDPR’s priority for amending the game through hotfixes and patches will likely alter that timeline. 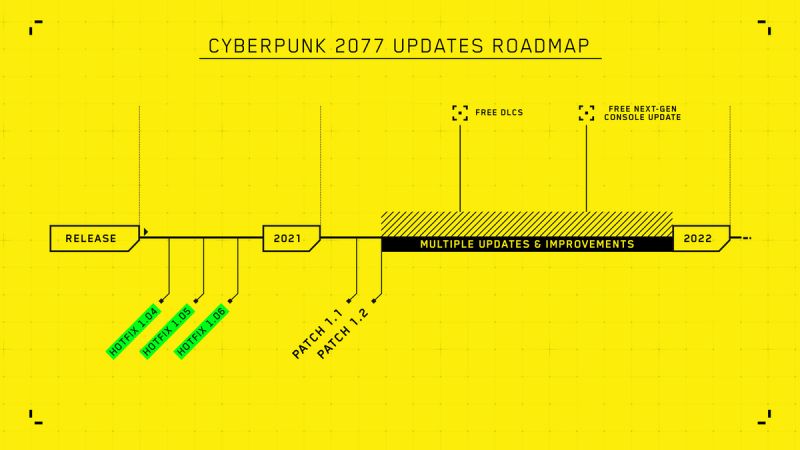 “We’re still planning on releasing free DLC for the game, just like with The Witcher 3,” CDPR added. “However, we have decided that our priority is working on the most important fixes and updates. We will be releasing free DLC afterwards — we’ll have more to say about that in the coming months.”

In addition to the Cyberpunk 2077 Patch 1.1, the next-generation upgrade, which CDPR has stated will “use all new functions and possibilities of the PS5 and Xbox Series X, will be free and is expected in the second half of the year.

“For those who are playing the game on next-gen consoles via backwards compatibility,” CDPR added, “we are planning the free, next-gen update for Cyberpunk 2077 on Xbox Series consoles, and PlayStation 5, this year. We’re aiming for the second half of the year and we’ll reveal more when we have more to share.”

CDPR made sure to note that the developers working on Cyberpunk 2077 Patch 1.1 and any future updates won’t be subjected to any spartanic “crunch time” sessions to quickly bring the game back on track. “The team is working to bring relevant fixes to the game without any obligatory overtime. Avoiding crunch on all of our future projects is one of our top priorities.”

What do you think of the news revolving around Cyberpunk 2077 Patch 1.1, the update and DLC roadmap and the next-generation upgrades? Let us know in the comments.