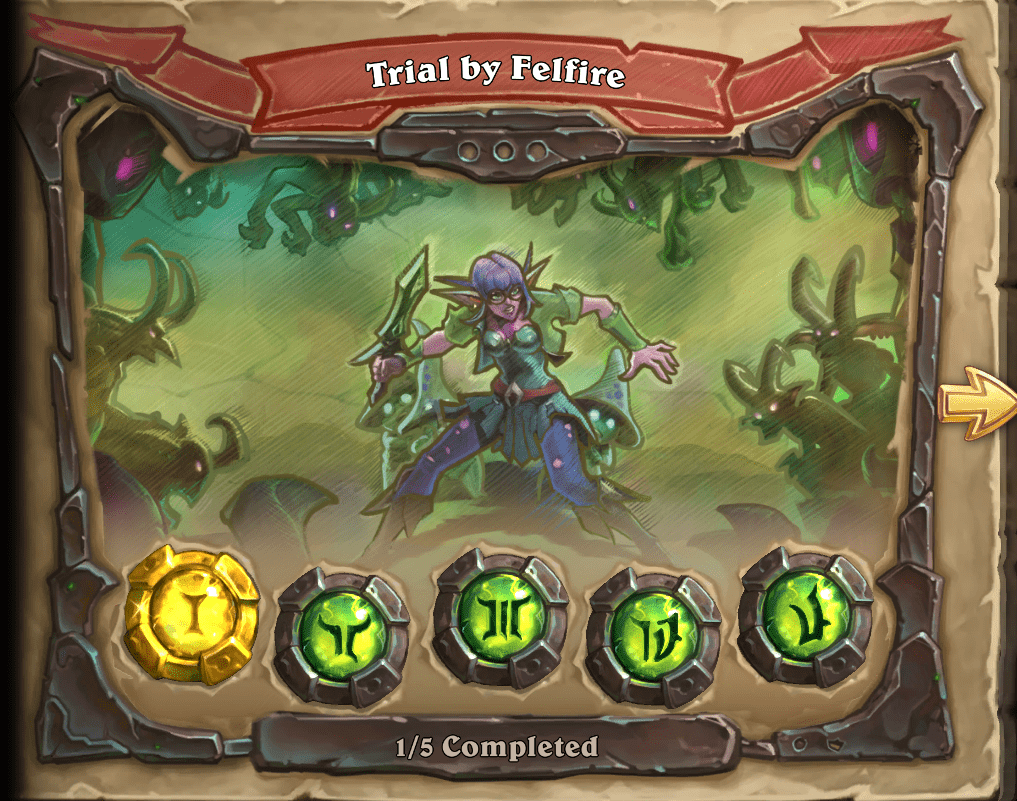 Illidan isn’t done telling his side of the story just yet — Hearthstone: Ashes of Outland’s brand-new Trial by Felfire solo story content, which went live with yesterday’s 17.4.1 update, continues the iconic Demon Hunter’s narrative. (Be sure to use our Demon Hunter prologue walkthrough if you still haven’t unlocked the Demon Hunter class.)

This time the Rusted Legion and their “mindless mechanized monstrosities” have threatened to overwhelm Outland. And the only one who can stop them is… Aranna Starseeker?! Use our Chapter 1: A World in Ruin walkthrough to help guide Aranna past the Rusted Legion’s dangerous underlings.

Inquisitors are demons in the service of the Burning Legion who channel their frightening fel magic through floating green eyes. According to

We’ve encountered one in Hearthstone before in The Witchwood expansion in the form of Felsoul Inquisitor. According to Wowpedia, “of all the foul creatures that serve the Legion, the hooded inquisitors are perhaps the most mysterious, and most menacing.”

Dakrel is definitely an intimidating character, with an appearance (and voice actor) that wouldn’t be out of place in a Clive Barker film. Here’s how to make sure that Dakrel doesn’t swallow your soul.

Dakrel utilizes a mix of Priest, Mage, Demon Hunter and Warlock cards. He can flood the board with surprising quickness, so make sure to mitigate his minions and then go for face. 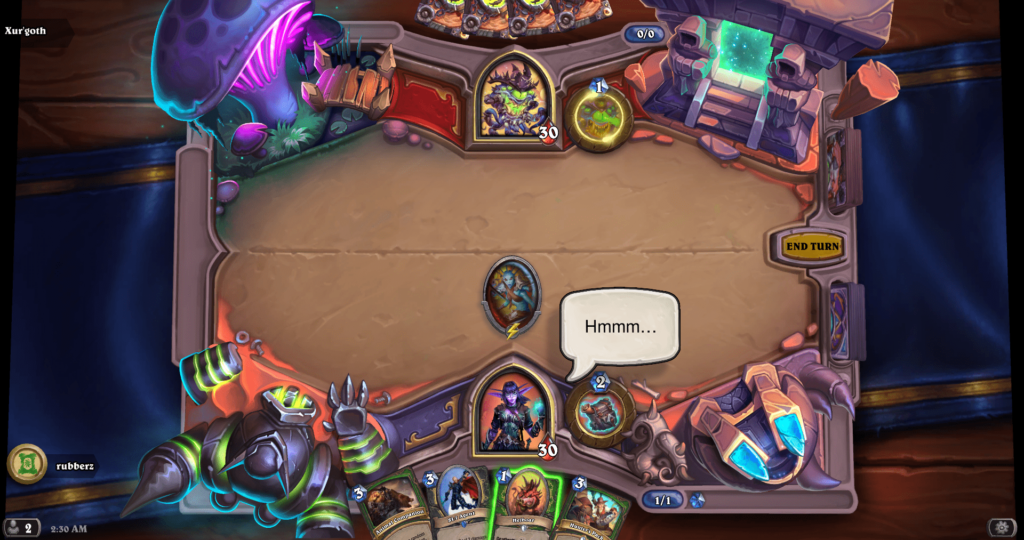 Hero Power: (1) Rusted Gaze: Corrupt a card in your opponent’s hand. They have 1 turn to play it!

Xur’goth is a Beholder, a one-eyed floating creature in World of Warcraft lore. When Aranna comes across Xur’goth, she is attacking a female naga named Shalja, Outcast. Shalja will remain dormant on your side of the field until 3 demons are killed and has Windfury, Rush and Outcast: Add 3 Shaman spells to your hand.

This fight should be easier than the first, although if Xur’goth corrupts your best cards and forces you to play on a less than ideal curve, you can quickly fall behind. 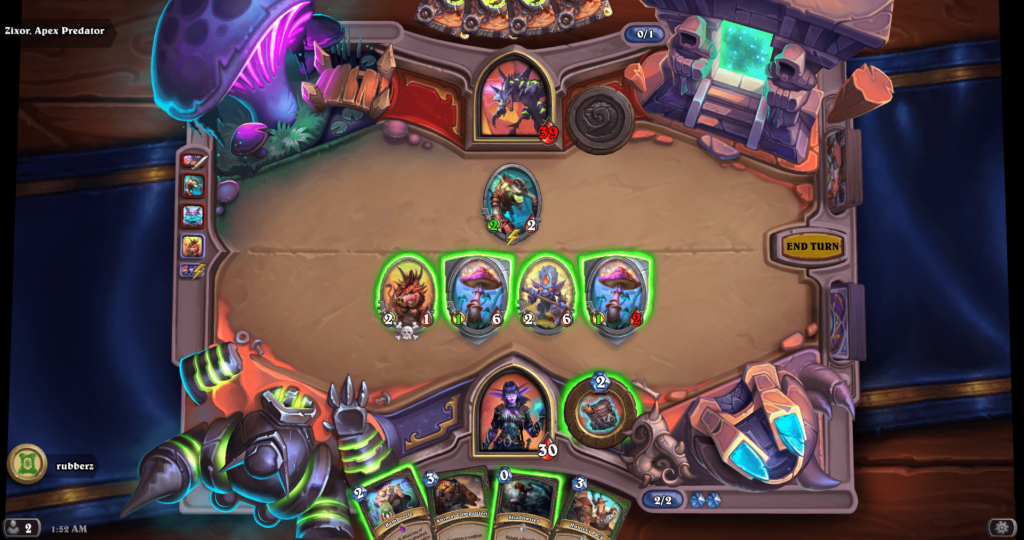 Zixor, the warp stalker and Legendary Hunter minion from Ashes of Outland is the third boss encounter in Trial by Felfire.

This fight also introduces the second Outcast to join Aranna’s side — Sklibb, a Sporelok minion. Sklibb’s ability gives adjacent minions +1 Attack and Taunt as well as Outcast: Summon two 0/6 Glowcap Mushrooms, which he starts this fight off with. 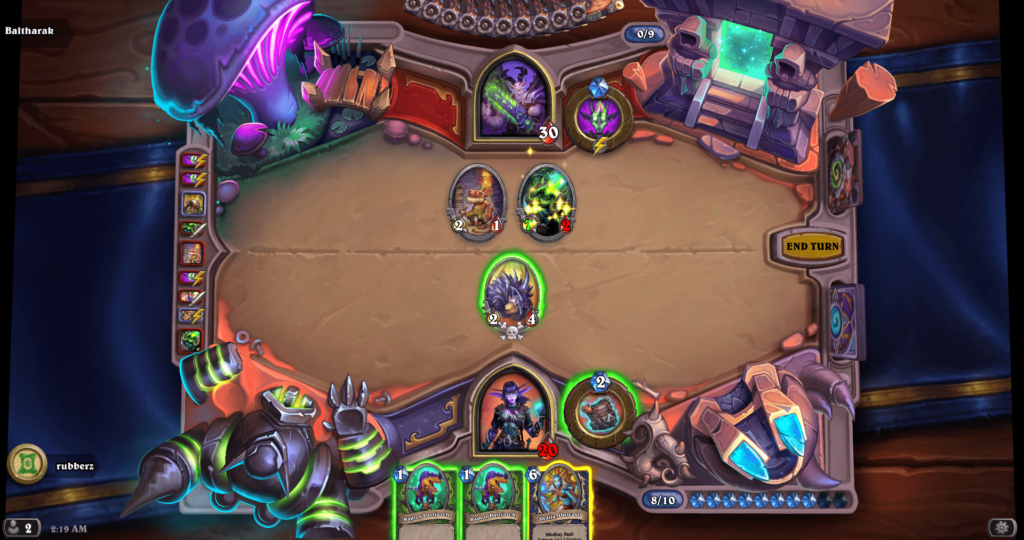 Hero Power: Passive, All Shall Serve: After a Demon dies, draw a card and restore 10 Health to your hero.

What would a World of Warcraft/Hearthstone narrative be without a Dreadlord encounter? Like most Dreadlords, Baltharak is a deceptive, cunning character whose Hero Power allows him to heal when his primarily Demon-centric deck is attacked. The key to defeating Baltharak? Give him what he wants.

Did this guide help you make your way through the first chapter of the Hearthstone Trial by Felfire solo adventure?

Ready to take on the next chapter? Jump to our Hearthstone Trial by Felfire Chapter 2 walkthrough.

RELATED:  Return to Un'Goro: A fan-made Hearthstone adventure
In this article:hearthstone, trial by felfire walkthrough