'People don't realize how much work goes into a Call of Duty game,' says former dev

Why mobile is the future of the gaming industry

Hearthstone rolls out Darkmoon Races, a mini-set with 35 brand-new cards

Although fan reception towards Pokemon Unite, the MOBA-styled Pokemon game in the vein of League of Legends and Dota 2 was met with with a mixed reception (or at least, not with as much fervor as the New Pokemon Snap announcement or as a remake of Pokemon Diamond and Pearl for the Switch would have been) following The Pokemon Company’s Pokemon Presents livestream announcement in late June, the prospect of a Pokemon MOBA is still intriguing no matter how you HM01 Cut it.

Which is why a batch of leaked Pokemon Unite screenshots from a Chinese social media website have been causing a stir on social media and in Pokemon circles in recent days. The screenshots, which appear to be authentic, reveal Pokemon that weren’t shown in the official Pokemon Unite trailer as well as playable trainers that look to have plenty of customization and wardrobe options.

The following image appears to be a screenshot from Pokemon Unite‘s home screen, where players will be able to select their trainer before heading into the Pokemon select screen.

This screenshot gives a glimpse at some of the customizable wardrobe options that will be available for Pokemon trainers, which will include sailor outfits. It’s unknown yet whether the nautical-themed clothing will have some positive effect on Water-type Pokemon or if they’ll need to be unlocked through microtransactions.

Here’s another wardrobe select screen, which shows how players will be able to customize their headgear, shirts, pants, socks and shoes.

This leaked Pokemon Unite screenshot provides a look at the Pokemon select screen. The Pokemon available for a player to choose are provided on the left (you can see Venusaur, Blastoise, Pikachu, Wigglytuff, Slowbro, Snorlax, Greninja and more) while Pokemon that have been selected are on the bottom row, with a green check mark next to those who have been locked in for play. The player’s teammates have already chosen Zeraora, Pikachu and Lucario, so they’re no longer available as options to the player; much like standard MOBAs, players won’t be able to select the same character as their teammates.

RELATED:  Pokemon Unite, a League of Legends-style MOBA revealed for Switch and mobile

The playable Pokemon confirmed in the above screenshot include:

The screenshot below shows what appears to be a single-player select screen. The trainer selects Machamp as their playable Pokemon while the other Pokemon seen will be controlled by the computer. 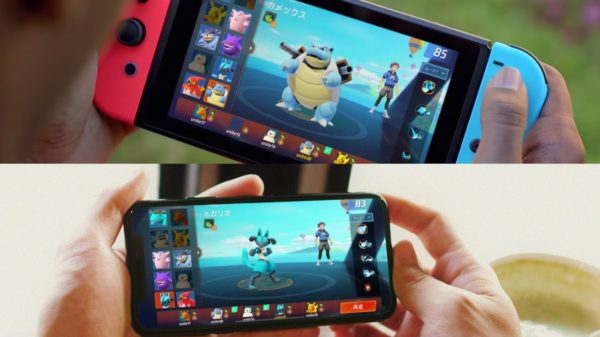 Have you ever played League of Legends or Dota 2 and thought to yourself, “This is great. But it’d be even better if I...